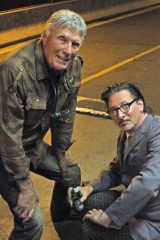 Gregory and David at the Belly Up. Photo by Jeffrey Hudson.

On a hot summer’s dog day afternoon I met up with my Uncle Dave Page at the Kensington Cafe for a welcome-home cup of Joe. He and his lovely wife, Sandy, had just returned from Northern Ireland where they had planned to stay indefinitely. In June of 2010 they sold their cozy home on the hill, packed up their dreams and aspirations along with their talkative chihuahua “Cricket,” and turned a new page (pun intended) to a new chapter in their lives in a quiet town in the North called Moira (which happens to my Mum’s name). The green, green grass of home is not always greener on the other side and less than a year after they had their Bon Voyage Party, which was attended by family and a who’s who of the musical community, they were back in sunny San Diego. “So how was it over there in the magical land of Lucky Charms and whiskey?” I asked in a made-up Irish accent.

“Ireland has three months of winter and then nine months of bad weather,” he replied with smile. I noticed, though, that he had not lost his California tan as he continued to explain that between the cold rain and the falling economic crisis it was an easy decision to return.

As we caught up on what had happened to the both of us over that year, Uncle Dave was tapping his pen in rhythm on his mug and a ketchup bottle. As a child growing up in Dublin, Dave Page knew in his young heart that when he grew up he would become a drummer.

His musician father David Page Senior told him one day, “Its not easy to earn a living by playing music and I’ll warn you right now. I’m not trying to put you off, and I know you are talented enough if you practice and concentrate but I must advise you that you won’t make much money.”

Uncle Dave put down his cup of tea and said with a smile, “You know what, he was right. I’ll tell you honestly that if I had to go back to the beginning and had the chance to change anything, I wouldn’t change a thing” As the buses and scooters hurry past us and the neighborhood is on the move, I sit listening to my Uncle Dave ignoring the din around us, “I have to be honest,” he says with a laugh, “I’ve not made a bean, really, but I haven’t been miserable, I’ve done more than I’ve ever wished for. I tell this to Sandy — all I’ve ever wished for up to now I’ve done. When I was a kid I dreamed of performing at Carnegie Hall, which I did. I wanted to travel the world, which I did several times. Everything I dreamed of I’ve done. Now I’m here; I’m ready for more.

“Dreams can’t stop, if I ever gave for whatever reason I would not give up dreaming,” We talk about some of the memorable shows and bands he has been in along with films scores he has recorded on. David was the original drummer for Tom Jones, appearing on the “Ed Sullivan Show.” He has performed with such artists as Frank Sinatra, Bob Hope, Bill Cosby, and has recorded with Marvin Gaye. He worked with the BBC Orchestra as well as with the Glen Miller Band. He has been the drummer on several movie scores including The Prince and the Showgirl, which featured him accompanying Sir Laurence Olivier and Marilyn Monroe; Island in the Sun; and the BBC production of Alice in Wonderland starring Peter Sellers. He can be heard regularly on the soundtrack of Monty Python’s Flying Circus. So I ask what keeps him inspired to play drums whether its at the Hollywood Bowl or the Farmers Market? “I haven’t a clue,” he replies and then elaborates.

I ask him about his custom-drum company Page Drums, if he feels discouraged by the lack of sales after 15 years of building some of the best drum kits in the world. He is quick to answer, “What kills me is that after all the trade shows and countless money spent on advertising along with world-class drummers playing my drums on national TV to millions of people, it has not done us much good.”

There is no slowing down in his future when it comes to perfuming. He has more energy and enthusiasm than most drummers half his age. I turn off my tape recorder and put the lid on my pen as my generous uncle picks up the tab. I speak for many when I say how grateful I feel to have him and my aunt back in the neighborhood again.

One Man’s Journey to Find His Tribe

Kelsea Little Makes the Harp a Cool Instrument to Play