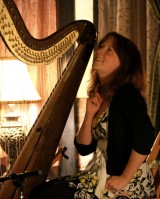 Kelsea Little with her harp. Photo by Dennis Andersen.

You can pinpoint the day the world first learned of Kelsea Little’s talent. It was November 21, 2006. That was the date that someone posted an amateur video of a young trio featuring Little and the Wrong Trousers, busking a version of the Buggles “Video Killed the Radio Star,” in Balboa Park. Recasting the song for harp, mandolin, and upright bass, the amateur clip quickly went viral, showing up on blogs and news sites all over the world. To date the clip has been seen by more than 633,000 people.

Now on indefinite hiatus, the Wrong Trousers consisted of harpist Little, stand up bassist Mackenzie Leighton, and mandolin player Joseph Lorge. Formed in high school, they released one album, One and Counting (2007, produced by Peter Sprague). The band quickly became a big draw on the local coffeehouse circuit, but amicably drifted apart in 2009.

Little has since become a solo artist. On December 3, she will host a CD release party at Lestat’s celebrating her debut album, Personal Myth.

While the Wrong Trousers was known for their quirky acoustic sound, with its roots in old time folk, Little’s new album has a more modern edge. “My favorite music is current indie rock music,” she said. “It’s my [purpose] in life to make the harp cool. There has never been a harp as a main instrument in an indie band, so I have a traditional rock set up and then the lead instrument is harp. I wanted to show people that the harp can sound awesome rather than, ‘oh! Am I in heaven right now, what’s going on?’” Little joked.
She signed to Aural Gravy Records in January 2011, with recording beginning in August. “Recording only took about three months, but, really, I was working on it all year,” she remarked. “I spent that whole six or seven months choosing songs [and] orchestrating everything,” she said.

According to the label owner Miano, his introduction to Little is down to a fortuitous YouTube visit. “I stumbled across a video of Kelsea playing her harp,” Miano explained. “I liked what I heard and saw, so I watched a few more. To be honest I had never heard of her former band before. But I was so enthralled by the way she played her harp. She didn’t play it like a classical harpist but more like a rocker. She wasn’t afraid to pluck those strings with gusto, and she sang the same way.”

Miano immediately contacted Little and asked her to send some tracks from an experimental record she’d made. “I could tell by what I had heard so far that she was a great songwriter,” he continued.Â  “She knew what made a great song, and I trusted that; even though she had recorded only a handful of tunes, she had a lot more in her. Time has shown my hunch to be right.” He considers Little’s album to contain great melodies. “They hit you right where it counts, I mean the heart, of course,” he said. “Throughout the mixing process, her judgments about what does and doesn’t sound good have been spot on. Whatever ‘it’ is, she’s got it.”
Harp might not seem like an obvious first choice for an instrument, However, Little has been focused on it, pretty much since the first time she laid eyes on one. “My best friend lived right down the street from me when I was younger and her mom was a harpist,” Little recalled. “I used to spend all my time over there and kind of pluck around on it. When I was eight she started giving me lessons.”

Little notes that by default the earliest music she played was classical and Celtic. “There are standard introductory harp books when you start learning. It’s just short vignettes of classical and Celtic songs. I always just played what my teacher gave me. I really didn’t get into pop stuff or songwriting until high school.”

Looking to expand her musical vocabulary, she soon began adding to her resume. “I just dabble in anything other than harp really,” she said.

“I’ve never really been trained on any other instruments, but I figured out I could play piano based on what I learned on harp, [then] throughout high school I taught myself the flute and clarinet.” You can also now add guitar, bass, ukulele, and melodica to that impressive list.

At age 15 she made her first big public appearance at a school talent competition with the newly formed Wrong Trousers. They took first place.

“With a band you usually have one at least or many, many disagreements or hard days, but it was 100% fun and smooth sailing, because the interests were just spread perfectly,” she said. “I always wrote the lyrics and our mandolin player Joseph always wrote the chords. He didn’t like writing lyrics; I didn’t like writing chords, our bass player just wanted to play [laughs]. So there was no power struggles at all.”
While she enjoyed playing in Balboa Park with the group, she notes the lack of boundaries between the performers and the public. “I don’t know what it is about playing in the park. I mean there is no stage, but people will come up to you and start talking to you while you’re in the middle of singing or playing, and it’s so awkward usually,” she laughed. Little recalls an incident. “This guy came up to us and he had a camera in his hand. He came up to me, I was 16 or 17 at the time and I was not familiar with Hare Krishna. I didn’t know what that was and he was in Hare Krishna garb and he came right up and he said, ‘Say Hare Krishna.’ I thought it was a greeting in another language, I don’t know [laughs]. So I said it. And then we ended up on the Hare Krishna home page, with me saying ‘Hare Krishna.’ That was the funniest thing that happened,” she recalled.

Collectors should note that Little has done session work, including albums by Tokeli, Isaac Cheong, and Happy Ron Hill. Meanwhile, sessions for Personal Myth have yielded a pair of outtakes, “Us Stew” and “Debacle,” which are set to become B-sides for the albums first two singles. Future plans include regional touring, videos, and more, but first the CD release show.

With such obvious dedication to her craft, it’s clear that for Little music holds a lot of power. “I like being able to positively affect people,” she said. Little cites an impromptu performance during Occupy San Diego to illustrate her point. “I played harp the very first night, when it was located in children’s park,” she said. “It was amazing all these people coming together, hopeful for once that the world could be fixed. I had my harp, I didn’t plan on bringing it, but someone said I should play. Every one gathered around me when I put my harp out. It sounds weird to talk about, but when I played people started crying.” Her music allowed the emotions of the day to emerge. “I’m just overcome in those moments,” she said. “It was like seeing the power of music concretely in front of you. And that’s why I like being a musician.”
www.kelsealittle.com

A Music Store Just for Drummers