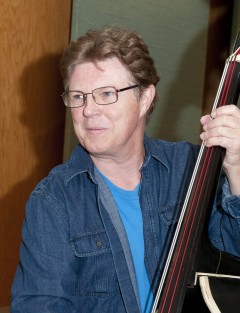 Craig (far left), along with the author, Wayne Riker, in Hey Fever in the early 1980s 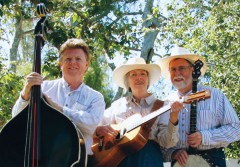 Mike Craig was no different than many of his boomer generation counterparts who took up bass during the pop music English invasion in the mid-sixties, an era in which there was an immense overflow of youth wanting to be George Harrison or Eric Clapton, forcing many of those eager guitarists to switch to bass guitar in order to successfully consummate their budding teen bands, including San Diego native son Michael Craig. “Everybody had a guitar, but nobody had a bass,” Craig emotes upon reflection in our recent interview over combination plate #53 at his favorite taco joint on Adams Avenue. “In addition, I started noticing those cool Motown bass lines and the melodic Beatles’ bass riffs that McCartney was playing, and thought, yeah, bass would be cool.” He attributes his musical beginnings to his ties with his local church in National City, during which time he attended Granger Junior High and Sweetwater High School. “My mom and dad were singers in our church choir. My dad had a beautiful bass voice. I started learning guitar from a guy that attended our church, but my first musical encounter was with clarinet lessons in the fifth and sixth grades, followed by marching band in junior high and high school.” Realizing that clarinet was not as cool as playing guitar was in those days, Craig echoes the all-too-familiar words of so many youth of that bygone time, “it became pretty obvious that clarinet was not the best instrument to attract girls,” he smiled, “in addition to watching how well it worked for Elvis in all those movies at the time.”

Being the only electric bass player in his neighborhood, Craig was in high demand for the local high school garage band circuit, until he was introduced through his church folk band to an acoustic bass, aka stringed bass, upright bass, double bass, or in Bluegrass circles, the doghouse or bass fiddle. “At that time, a lot of churches were opening up to the idea of having folk music instead of the more traditional church music,” he explained. “They handed it to me and said figure it out, quite an undertaking on my own as the bass fiddle has no frets on it. Many of the folk artists of the day, such as the Limelighters and the Kingston Trio were using acoustic bass, so it fit right in with the folk oriented music we were playing.” Having the propitious combination as an electric and acoustic bass player, he was ready to embark on a circuitous journey and eclectic career as a performer and teacher. “My first band was called The Odyssey,” Craig recalls. “We made business cards, our moms made flowery vests for us, and we got to play on the Mexican TV station, Channel 12. They interviewed us in between songs, in Spanish, which none of us spoke, so we just nodded our heads. Our first paid job was a New Year’s Eve gig at the VFW in downtown San Diego, $15 apiece,” he laughed while ordering another round of chips and salsa.

After graduating high school, Craig entered Southwestern College as a music major, feeling the need to understand music theory and application a bit better. “In public schools they taught you how to read notes, but they never taught us the theory, so it helped prepare me for a more knowledgeable career as a teacher and player,” he quipped. “My first private teaching job came through another church connection. The choir director, David Yantis, owned a music store and hired me as a guitar and bass instructor.” Concurrently, Craig remembered meeting and playing with Walt Richards, a teaching fixture and performer on guitar and banjo, back in Craig’s folk group days at the church. “I called Walt, who was teaching at Grayson’s Music store at the time,” he states, “and asked him if they needed another teacher. I got hired and wound up teaching there full time after Yantis’ music store went out of business.” After Grayson’s Music shut down a few years later, Craig, Richards, and fiddle instructor Gary Francisco, aka Farley the Fiddler, joined forces to open what would become the legendary grass-roots music store in San Diego, the New Expression, in 1974.

While teaching guitar and bass at the New Expression, Craig was perfecting his double slap technique on the acoustic bass, earning him a host of bluegrass and country gigs, primarily with Richards’ group, San Diego Grass & Eclectic Company, gigs with fiddler Tom Cunningham, and a steady gig with Bluegrass Etc., featuring San Diego luminaries John Moore and Dennis Caplinger on mandolin and banjo respectively. Moore, now residing in Colorado, was teacher and mentor to San Diego mandolin wiz, Chris Thile. “Those guys were amazing,” Craig exclaimed, “great multi instrumentalists; throw Dennis a tuba and he could play it — he could play anything, in addition to having the nerve of being a really nice guy.” The group got a golden opportunity for a steady gig, with the details recalled vividly by Craig upon completion of our tasty enchilada combinations… “John got a call from Disneyland; they wanted us to audition for them the next day, so we went up to Anaheim thinking we might get a house gig there. Turns out that the Disney representatives in the room were all Japanese. They listened to a few tunes, nodded affirmatively, and then offered us a four month gig at their brand new Tokyo Disneyland location. I had a great time, really enjoyed Japan, wonderful country.”

As an electric bass player, Craig has been through the ringer, playing in the top 40, country, rock, and blues circuits as a member of numerous bands around San Diego County, including the Black Slacks, fronted by Tom Cunningham’s brother, Barry, on guitar and vocals. “We scored a three-month summer gig at a club in Hawaii,” he recalls. “Everyone was excited, however, after the first month, the club went out of business, so we were stuck there. Barry was a hustler and wound up booking a few random gigs here and there before we eventually returned home to the mainland.” Craig was also one of many bass players to have played with Roberta Linn, the original television champagne lady on the Lawrence Welk show, during her five-year run at the Atlantis Restaurant on Mission Bay, from 1979 to 1984. Before that stint, in 1981, this author and Craig played in Hey Fever, a dynamic five-piece country group that featured Craig’s slap bass and fiddler Gary Francisco’s extraordinary clogging on table tops during his fiddle solos. Hey Fever played all the top country hot spots back then, including the Big Oak Ranch, the Mustang Club, and Circle D Corral, along with a couple of memorable shows at Knotts Berry Farm. “That was a fun band,” he mused, “and great memories of going on as many rides as we could in between sets at Knotts Berry.”

At the dawn of 1985, Craig made a decision to leave his hometown and test the musical waters of Austin, Texas. He had made a contact there in Rex Ludwig, a former drummer with Willie Nelson, who invited Craig to a jam session with blues guitar icon, Lonnie Mack, who had just recorded his Strike Like Lightening album, produced by Austin guitar slinger, Stevie Ray Vaughan. Turns out that he was in the right place at the right time as Mack was looking for a bass player to go on tour with as the opening act for Stevie Ray Vaughan. “It was a great tour,” as he reminisced back in time. “We wound up opening for George Thorogood as well and had a triple bill with Vaughan and the Gregg Allman Band in Tulsa. We played some big arenas on the weekends, but then small dive clubs during the weekdays, a real mixed bag, a fact few people realize, that no matter how big a name you are,” he stated emphatically, “it doesn’t matter; if you want to keep playing, you play anywhere.” During that tour, he recalled a memorable poker game in Vaughan’s motel room. “Mack warned me that Stevie had more money at the time than God, so be careful he doesn’t wipe you out, you don’t wanna lose a week’s wage.”

After the tour, Craig returned to San Diego for a couple of years, got married, and decided to move to the Orlando, Florida area, hoping to possibly find gig opportunities at Disney World. Instead, he got a lead on a working rhythm and blues band, complete with arrangements and a horn section, called the Brave Men Band, which led to two decades of employment in the Sunshine state. In the process, the band became a first call backup band for many oldies acts, including Percy Sledge, the Shirelles, and the Crystals. Even most long running bands disband gradually at some point, and in 2009 Craig returned home to America’s Finest City to take care of his mom and be back where it all nostalgically started for him. As fate would have it, Walt Richard’s current group, Trails & Rails, was looking for a new bass player, and so Craig’s career came full circle. “Mike has a wonderful enthusiasm that he brings to his music; he can play just about any type of music, and he can sing harmony,” stated Richards on Craig’s return. “It all seemed fitting that I’d be back playing with Walt all these years later,” Craig retorted. “I even picked up some gigs with old bandmate Tom Cunningham, currently fronting an Americana type group.” So on your next excursion to hear local music, don’t be surprised if you see Mike Craig playing bass with any number of local groups. Rumor has it that he’ll be playing bass shortly in Alan Iglesias’ Stevie Ray Vaughan tribute band. Stay tuned.

Latin-themed Concerts This Month from the New Expression Mandolin Orchestra

All in the Family: When Harry Met Nancy