September 2022
Vol. 21, No. 12
All in the Family: When Harry Met Nancy by Paul HormickFebruary, 2013
Songbirds Take Flight by Charlene PulsonettiFebruary, 2013
Performers and Artists Contribute to the Audubon Society’s Birdsong Project by Paul HomiczFebruary, 2013
Finding the Balance Between Science and Music: An Interview with Dr. Hima Joshi by Catherine BarnesFebruary, 2013
Jazz 88's Joe Kocherhans Bids Farewell to a Long and Illustrious Career by Wayne RikerFebruary, 2013
Tiki Oasis Celebrates 20 Years of Exotica Mayhem and Fun  by Andy RasmussenFebruary, 2013
The Lady Doctors Will See You Now by Laura PrebleFebruary, 2013
Happy Birthday, Jeannie! Jeannie Cheatham Celebrates her 95th Birthday this Month by Jim TrageserFebruary, 2013
Zach Caplinger: A Gifted Musician in his Own Right by Dwight WordenFebruary, 2013
The Return of IPO San Diego: After a Five-Year Local Hiatus, David Bash’s Unique Music Festival Makes a Much-Anticipated Return by Scott SamuelsFebruary, 2013
Advertisements 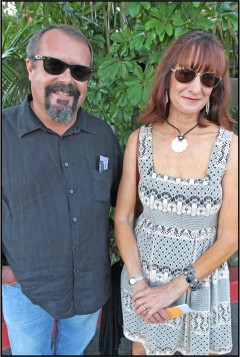 “For me, music is life.” Says Nancy Mestyanek. She gives a slight smile and glances over at Harry, her husband and bandmate in Folding Mr. Lincoln. “With this band, we like the music that we’re playing. We’re fun,” she adds.

As the duo who established Folding Mr. Lincoln, Harry and Nancy Mestyanek are at the center of the six-piece contemporary folk ensemble that has been hitting the showcases and cafes around San Diego for the last four years. With strong harmonies on well-crafted original tunes, the band has a comfortable, down-home feel. At their shows it’s easy to feel like kicking off your shoes and sitting back to relax for a while.

Both Harry and Nancy have been music lovers their entire lives. Years ago Harry and a few of his fellow Orange County friends met every couple of months for informal jam sessions. Nancy, who lived in La Habra, dropped in from time to time to visit and listen to the music. Over time the two became friends; they started seeing each other and got married in 1977.

They began performing together, just the two of them, Harry on guitar and both singing. They modeled themselves on the acoustic pop that was popular at the time and performed songs by musicians such as Dan Fogelberg and Judy Collins. The duo never spent much time on advertising themselves, making up mailing lists, or hunting down gigs. They never even bothered with cooking up a name for the band, performing simply as Harry and Nancy. Though they eschewed self-promotion, the two performed often, being a mainstay for weddings and appearing around Orange County, with a few shows in San Clemente.

Music took a hiatus when their children came along. Harry, a landscape architect by profession, was also busy teaching as an adjunct professor at Saddleback College. “But 2005 brought change at that time in our lives,” says Harry. The couple were living in South Park and began singing old favorite songs at open mics. “We were getting some good reactions to our performances,” he says. “Catherine Beeks included us in a few of her showcases.”

The two of them made a demo recording of 12 songs. Harry says, “The songs were pretty good, but it was a home recording and I wasn’t happy with it.” At the suggestion of Beeks, the Mestyaneks contacted Jeff Berkley, the recording studio maven and one half of Berkley Hart, San Diego’s award-winning acoustic duo, to work with them to record a quality CD. The result was Within My Reach, a 14-song collection of original songs. Harry and Nancy perform on the disk, with the other instruments provided by studio musicians.

As the couple were wrapping things up on the disk they were talking things over with Nancy’s brother, Mark, while lunching at the Shakespeare, the British style pub in Mission Hills. The topic of the new band’s name came up. Harry recalls, “I had a five dollar bill that I put in my pocket and said, ‘How about Folding Mr. Lincoln?’” Neither Harry nor Nancy remembers anyone getting up from the table and proclaiming, “By George, I think you’ve got it!” Nonetheless, the name stuck around and settled its way into the band.

They had a disk and had a band name, but they didn’t have a band. “So I knew we had to put a group together real quick,” says Harry. The original line-up included David Ybarra on bass and San Diego’s crooner of extremely sad songs, Jeffrey Joe Morin. The current lineup includes Jeff Stasny on drums and bassist Dave O’Connell, who has played with Harry before and helped with the Within My Reach CD.

Charlie Loach plays lead guitar in Folding Mr. Lincoln. (In full disclosure, Loach is also a columnist for the Troubadour.) “I started playing with Harry and the band, and I thought it was something to do while I was looking for a permanent band for myself,” he says. “But playing with this band has completely rewritten my whole approach to the guitar. Until I played with Folding Mr. Lincoln, I had completely separate ideas of what worked for electric guitar and what worked for acoustic guitar. I thought acoustic was flatpicking, like bluegrass stuff. For rock I played in the style of Joe Walsh, sort of a blues-rock thing. That was that, and never the twain shall meet.
“But I started playing this acoustic music, and I started hearing where electric guitar lines would best serve the music. Over time I’ve developed a new style — part jazz and part country. Right now I’m committed to the band and feel that I’m not limited by the acoustic guitar in what I play.”

In one of those “it’s a small world” stories, Alicia Previn, who is the violinist for Folding Mr. Lincoln, first heard the band only to find that she had worked as a co-teacher in the same classroom with Nancy, who has taught music and movement to preschoolers in Del Mar for the last 19 years.

As the daughter of conductor AndrÃ© Previn, Alicia grew up in a world of music. A musician and writer, she has been playing violin since the age of seven and took training from several top professional classical instructors in America and Europe. Though she was thoroughly imbued in the world of classical music — at one point she was to perform for Jascha Heifetz — Previn chose to follow her heart and play popular music. “I was 13, playing Berlioz and Tchaikovsky, and I thought, ‘Why should I play the same music that other people have been playing for hundreds of years?’ Besides, my heart was not getting anything out of classical music. It seemed to me to be music aimed more at the head than the heart.”

She dove into the alternative scene of the late seventies and early eighties and was the initial violinist for the Young Dubliners. “Before they were famous,” Previn rues. There seems to be no end to her enthusiasm for music and playing with different musicians and bands. “I was playing recently with Gypsy Groove and also jamming Gypsy jazz with Beston Barnett. And I’ve been playing Irish music,” she says. The busy musician also writes children’s books. Her soon to be released title is The Strange Disappearance of Walter Tortoise.

Like Loach, Previn says that Folding Mr. Lincoln allows her to really stretch her wings. “We did some studio work recently, and it’s probably the best work that I’ve ever recorded,” she says. Both Loach and Previn appreciate the family atmosphere that the band has. Harry makes sure to cook dinner for the band to enjoy at their weekly rehearsals.

Besides singing, Harry plays mandolin, an instrument that he recently picked up. “This was about when I turned 50, and when I stopped teaching. I began to hear the mandolin all the time in bluegrass songs, in country songs,” he says. He took up the instrument and still takes lessons.

On the horizon is Two Rivers, a CD planned for release in early April. With recording starting last July and running through to October, the disk was taken to Los Angeles last month for mastering. “The whole CD is a story, a life-long love story of Lynn and Eugene,” says Harry. “I had two or three songs. They weren’t connected in any way, and I showed them to Charlie. And we started to see that they had this common theme. So I wrote another seven or so songs, with the idea in mind that they were going to tell this love story.

“Things were coming together pretty well, but I started to wonder if I had been redundant with story lines or ideas — if I had chaptered the story correctly, if I had a hole in the story.” He prepared a PowerPoint presentation of the project and sent the material to Lizzie Wann, a poet and writer; Geeta Malik, a Los Angeles-based filmmaker; and Peter Dale, a novelist who lives in New Zealand, for their critique and input on the CD project. “It was Geeta to point out that I had them split up and get back together, but I had not shown what brings them back together. Lizzie was the wordsmith. She made suggestions to change a few of the words here and there. Peter was great with the big picture, keeping the whole story together.” All the members of the band took part in arranging the songs.

Also on the horizon, Harry and Nancy see the band expanding their territory and performing more far afield from South Park, moving into Los Angeles and Orange County and possibly doing a small tour. “It’s great to get out there,” says Nancy. “It’s like when we played over at Bird Park, a whole park filled with people listening to the music and dancing. That’s what we want.”
Nancy, a breast cancer survivor, 14 years ago, was diagnosed this past November with an inoperable brain tumor (a Grade IV Glioblastoma) and is currently undergoing chemotherapy and radiation treatments for this particular form of cancer. Harry has planned a concert this month to honor Nancy with a night of the healing power of music.

Mike Craig: Bassist for All Seasons