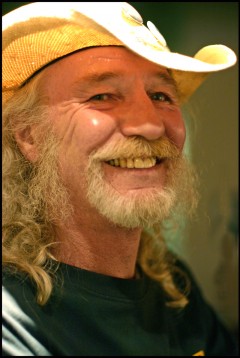 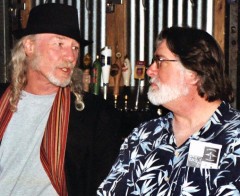 Hot Rod Harris was one of those rare souls in life who made everyone feel welcome, no matter how disparate a crowd he was in. Part of that warmth came from the fact that he was able to see the good in all of us, even if we couldn’t see it in one another.

Simply being around him made you want to be a better person, just so you could feel like you deserved to be in his company.

“Hot” Rod Harris passed away with his family by his side on Sunday, January 6.

His open-minded attitude toward people extended to music, where for a good stretch a decade ago he hosted the open mic nights at the now (sadly) defunct Hot Java CafÃ© in Carmel Mountain Ranch.

Under his gentle guidance, those Thursday and Sunday night sessions became one of the top draws in San Diego’s acoustic scene. It wasn’t just Hot Rod’s warm personality that drew music fans, of course — it was all the other talented folks who were drawn to him and brought their music to Hot Java. And Hot Rod loved all of them.

He was clearly just as delighted to sit and listen to Jeffrey Joe Morin sing his old-timey pre-war (World War II, that is) Tin Pan Alley nuggets as he was hearing former Monroes guitarist Rusty Jones introduce new folk-rock gems to the crowd. Jordan Reimer was all of 16 when she started coming to the open mics at Hot Java yet was instantly treated as an equal, and Brenda Xu made her debut there yet was accorded no less a warm welcome than any of the veterans. It’s harder to think of folks who didn’t play at Hot Java than list all those who did. Hot Rod even got Rusty Jones and Tony Ortiz reunited on that tiny stage for some truly magical shows, where both men debuted more than a few new songs just as good as anything on their groundbreaking Monroes’ LP from the early ‘80s.

None of that magic would have happened without Hot Rod. He was the catalyst who brought people together, the popular kid in the acoustic music scene whom everybody wanted to hang out with. While he ran the music at Hot Java, that was the place to be because that’s where he was. (And Hot Java CafÃ© was where Rod got his moniker “Hot Rod,” as well as where guitarist Dave Sawyer — the de facto one-man house band — became “Doktor Dave” and acquired his ever-present chapeau.)

Under Hot Rod’s leadership, Hot Java became a popular draw for more than just the open mics as he began booking featured artists on Friday and Saturday nights. Many a weekend there had an overflow crowd spilling out onto the patio, with folks crowding the door to hear the music. Musicians from Los Angeles began driving down to Carmel Mountain Ranch to play at this cafÃ© they’d heard of all the way up north of Pendleton.

Sadly, half a decade ago a new owner bought the Hot Java and chased Hot Rod off. That manager must have been the only person on the face of the earth not to fall under the spell of Hot Rod’s decency and warmth. Within a few months, not only was the music gone but so was the venue.
In a November 29, 2006 interview in the North County Times, when Hot Java CafÃ© was at its peak of popularity and success, Hot Rod spoke of his life. He spent some time revisiting his years in the Navy — where he really learned to play guitar while stationed on a ship in the South China Sea during the Vietnam War. He spoke of his love for and pride in his children, and the new life he’d made for himself in San Diego.

But that was about as much as it was possible to get Hot Rod to speak about himself. He just preferred to talk about others — to talk TO others, actually. He found his greatest delight in us, his friends — and if you came to even one of his shows, you were one of his friends. It was the largest inner circle most of us will ever know, and yet its lack of exclusivity made being part of it no less special.

Most of us on hearing of Hot Rod’s passing have reflected on losing a friend — not a favorite musician or a contact or someone you once knew. A treasured friend, even if we hadn’t connected with him in a while.

Few of us will leave such an indelible mark on those we meet in this life.

Hot Rod Harris’ generous nature helped MANY struggling musicians afford to struggle another day. Some of the folks he helped over the years have formed the Hot Rod Harris Artist Assistance Fund to try and help carry on his legacy. It is accepting donations in any amount and with that it will grant small gifts of financial assistance throughout the year to San Diego musicians in need. Besides your donations, this fund will be replenished by a yearly fundraising concert on Hot Rod’s birthday, July 8th. Go to: http://www.listenlocalsd.com/HHAAF.html for more information.

All in the Family: When Harry Met Nancy

Jefferson Jay: Making the World a Better Place One Song at a Time