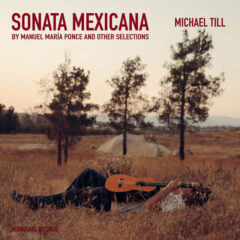 For over ten years Michael Till has made a name for himself in the local music scene. Studying jazz and classical guitar at Grossmont College, then continuing on to earn a bachelor’s degree in jazz studies at UCSD. He has performed with the Mad Hat Hucksters, Lindy and the Hops, the Marcia Forman Band, local guitar hotshot Jon Garner, and other notable musicians. Till plays in a number of popular styles, from Gypsy jazz and old-time swing to straight-ahead jazz; he currently leads his own ensemble.

The San Diego native has just released Sonata Mexicana, a collection of well-known classical guitar compositions and transcriptions. The disk is quite beautiful and enchanting. I enjoyed it from beginning to end.

Till opens the disk with “Austurias.” Isaac Albeniz’s paean to northern Iberia has been a popular piece since its composition in the 1890s. Originally composed for piano, Christopher Parkening skyrocketed the composition to the status of “Stairway to Heaven of the Classical Guitar” with his dynamic and stellar 1970s recording of the piece. Since then, performing this music has become something of a requirement for classical guitarists, with the expectation that they emulate Parkening’s exactitude and drama.

Till escapes this trap and conveys the work’s brilliant subtleties. I have heard this piece so often by so many guitarists that Till’s rendition proved to be an eye opener, allowing me to hear so much more in this classical guitar chestnut.

The prelude to Bach’s Cello Suite No. 1 receives Till’s treatment. This is the one piece of cello music that EVERYBODY knows. Movie makers and television producers rely on this composition when a cello is depicted on screen or on the tube. There are reasons for this. Bach deftly builds to that triumphant and oh, so satisfying G major that caps the composition. Few other pieces of music, particularly short ones, can feel so complete. Also, the composition is geared to the tuning of the cello. A good cellist can make his instrument ring out and sing that final chord. Till comes as close as any guitarist can to conveying the grandeur of this piece of music. And that is no mean feat.

The featured composition of the disk is “Sonata Mexicana” by 20th century composer Manuel Ponce, a delightful piece of music that layers the influence of Impressionism over the Iberian traditions of the guitar. At once dreamy, then lyrical, one hears the influences of Debussy and Ravel in this three-movement composition. Till well manages the contrasting moods of Ponce’s music.

Matt Rakers and Ryan Bradley performed impeccable engineering and mixing, some of the best I’ve heard for classical guitar, at the San Diego Music and Art Company. Other guitar recordings will enhance the sound with echo. This can give the impression of a concert experience, yet the clarity, the ringing quality of the upper register and the overtones of the lower strings, can get muddied. This recording is much more direct, and the timbres of the guitar come through well.

TIM FLANNERY: Waiting on a Miracle