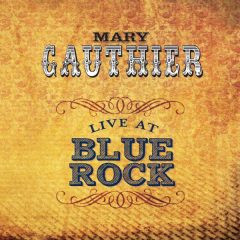 If an artist’s soul can be reflected in their work whatever the medium, the act of songwriting can be a daunting and at times scary, intimate thing. A painter, a poet or a writer can leave such reflections on the canvas or the printed page. However, the songwriter must find her work’s full realization in performance. Once a song is captured in the studio, in the hands of an artist like Mary Gauthier, it continues to grow over the years without force or rearrangement, but more like a living, breathing experience.

After a series of six consistently engaging albums, Mary Gauthier has released her first live album with Live at Blue Rock. The results are electrifying. The songs may be familiar (with the exception of three interpretations of songs by Fred Eaglesmith) to those familiar with her studio recording. If not, this is a very good introduction to the world of Gautier.

It’s a world well-worth returning to time and time again with songs of redemption during the often haunting alienation of life on the outer edges of societies norms. Even the stories and people who inhabit the songs her empathetic shades in the lyrics allow us to identify and feel their sorrow and hope. These are sometimes dark characters lost and alone like on “The Last of the Hobo King.” “Karla Faye Tucker” tells an empathetic but honest story of the first woman to be executed by the state of Texas since the Civil War. The song demonstrates Gauthier’s unique ability to get into the skin of her characters to tell her story, much like a good novelist.

There are also autobiographical songs like “Blood is Blood,” which deals with her feelings about her biological mother, from 2010’s The Foundling. This album was among the most daring work of emotional truth and vulnerability since John Lennon’s Plastic Ono album. “I Drink,” relates to her acceptance of her alcoholism, handed down from her father. “Fish swim,” she sings, “Birds fly. Daddy’s yell/Mama’s cry/Old men sit and think….I drink.”

The performance here recorded at a concert at Blue Rock Artist Ranch and Studio near Austin, Texas, is starkly textured allowing for a pitch perfect fit for the songs to breathe. Each song carries the resonance of the years Gauthier has been performing them. Probably the best evidence of this is on one of her best anthems, “Wheel Inside the Wheel,” which not only allow Gauthier to take on new passion on the vocal, but also gives the opportunity for some fine interplay with fiddle player, Tania Elizabeth, who pulls out the stops and adds new dimension to the already masterful song.

On Live at Blue Rock, Gauthier has proven her skill and artistry in the most dynamic way, live, in an intimate concert setting. Taking her songs on the road and sending them out the she has been doing for the last 15 years has given them a chance to grow in the depth of spirit. It’s allowed Gauthier a chance to hone her stage craft and to form these these songs in a brilliance that would otherwise be elusive in only a studio setting.