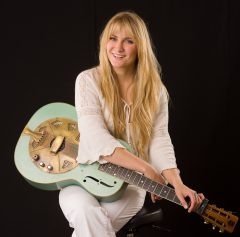 When the San Diego Music Award nominations for 2017 were announced, there were several established local artists on the list of nominees for Best Singer/ Songwriter. Then there was a new name: Lady Rogo. The Boston-area transplant switched coasts in early 2016 and has found the San Diego scene “very supportive and interactive.” Rogo appreciates the recognition from the SDMA and San Diego’s creative environment.

“I’m so honored; I was just as surprised as everybody else. One of my favorite things about living and working here is that I write so many more songs, because I’m such an outdoor ocean person that I just bring my guitar to the beach, and I end up writing a song. So, I’m writing a lot more because I can be outside constantly and the ocean is just a huge source of my inspiration, always has been.”

Rogo’s original music is a unique hybrid that puts a new spin on a traditional style, built upon her expertise as a country-blues guitar picker, often playing National Steel resonator guitars, sometimes with bottleneck slide. She is a student of old-time guitarists from the Delta and combines this skill with songs that resonate with messages about social injustice, personal struggles, and protest, which are sung by her lilting folk songstress-styled vocals that have plenty of range and power to make it all work.

“I started guitar at 14 and have been influenced by my mentor Paul Rishell and Blind Willie Johnson in terms of slide. Guitar is magic to me. Guitar defines infinite possibilities. With my guitar, I’ve always felt as though I can express things I cannot in words. I love the slide guitar in particular, because it is like a human voice. To me, the true feeling is in those ‘In between’ notes–the blues notes.” She also admires the style and techniques of iconic players like Skip James and Blind Lemon Jefferson.

Rogo found inspiration and mentors while a student at Berklee College of Music in Boston while earning a degree there. Rishell, Woody Mann, and Annie Raines were artists who functioned as guest teachers and played prominent roles in her development, playing her the records, showing her the songs, and giving her a chance to tour the South with them in 2014. “They are, to me, absolute pioneers of keeping country blues alive,” she says.

While completing her music degree at Berklee, Rogo also studied Yoga and meditation; she began working and continues to as a Yoga instructor, and sees much in common between blues music and these philosophies.

“To me the blues is so incredibly magical because it’s not dark, and it’s not really sad, but it’s not light and happy–so it’s this kind of in-between; it’s a dance of light and dark together, and I think that is what mindfulness and Zen and meditation is all about. You play the blues in order to transform your suffering, not to wallow in it. It’s kind of the same thing in the philosophies of yoga and meditation, and I just find the parallels so striking.”

As her songwriting developed, her love of country blues permeated the songs, but she also crossed over into other genres. She describes her music to the new listener as American roots and blues with a helping of social change.

“I don’t write to please people, I write for myself and it ends up where there is something for everyone. There are some people who listen to my singer/songwriter stuff and they love it, then they find my country blues stuff and they don’t really know what country blues is. And they go, ‘This is blues?’ And they end up listening to it and they think, ‘This is kinda cool.’”

She started performing at around 16, sometimes solo and sometimes as part of a band. Rogo has very fond memories of the tour of the Deep South by Richell and Raines’ Boston band Mojo Rodeo, through Arkansas, Memphis, Mississippi, and Tennessee.

“We had a great time, there are some great memories–it’s just the pictures that are in my mind of playing these barns that are in the middle of the woods in Arkansas, these little fish fry barns. We sat in the trailers of old and toothless blues players, listening to their stories and dancing to their impromptu music.”

Her songwriting draws from the rich traditions of acoustic blues players, but Rogo also cites an important guiding light as a lyricist.

“Other than country blues, I am highly shaped by Bob Dylan. I have always written songs, but when I listened to Bob Dylan in high school, I decided I wanted to write songs that could change the world. I just love his style and how he just fearlessly made change through music. I’m proud to say that I think every one of my songs stands for something, even if it’s kind of subtle. Some songs are a quiet protest, others are loud and roaring.”

Her debut album, I Will Give, came about after her song “Angels Down,” about the Sandy Hook slaughter In her home town, won a songwriting contest at Berklee. The album’s songs are a delightful mix; many are pure-bred blues arrangements with marvelously adept guitar picking, while others are more folk/pop frameworks for her lyrics.

“I knew going into the project that I wanted simple and stripped down, because that is how I wrote the songs in mind. So, some of the songs are just me and my guitar and some are me and a bass player and a drummer. Others are me on acoustic guitar and Annie Raines on harmonica. We just tried to capture the simplicity of country blues, even though many of the songs don’t sound too country blues, but they are inspired by it. The album is a mix of country blues and singer/songwriter styles.”

The songs are intimate and include the arresting title tune, which is built around haunting slide licks that resonate with harmonics and sound like something played on a creaky wooden porch 90 years ago. Among the other nods to the country blues is a pleasing thumper, “I’ll Make It Worth It,” with saucy lyrics. “I Chose the Light” is more upbeat fare, a catchy folk song that celebrates a positive personal choice. Rogo’s “Yesterdays,” a mildly rocking country shuffle that wraps the set, finds her taking inventory of her faults and worries, and finding a confident persona ready to “fly higher than I ever knew.”

“Songs have a way of healing you from the inside out, they are coping mechanisms. I’m so thankful for songwriting in that way. They just transform anything that needs to make it into a useful thing. In terms of writing, some of my songs are loud, then there are others that are subtle, like the title track of my album, I Will Give. It’s so incredibly simple, but to me I think it’s a social change song in a way. I think all of my songs are subtly social in that way. It basically says, ‘Nothing belongs to me, so I will give it all.’”

Rogo feels that the way a message is delivered can be as important as the message itself. Subtlety is her preferred approach.

“I think that social change and protest doesn’t always have to be screaming at the top of your lungs and I take pride in my subtlety. And that’s why people listen and absorb, because I’m not screaming in their faces and not telling them what is right and what is wrong. I honestly think every one of my songs is a positive take on something.”

After her album’s release, Rogo decided to relocate in early 2016 to the North County Coast. Despite loving the “very old vibe” of the East Coast and the fast pace and energy there, she felt that her approach to music works better in the San Diego scene. Here, she felt the music scene much more supportive and open. People here are friendly and willing to hear somebody new, while on the East Coast new artists have a harder time being heard.

“I always like to think of San Diego’s music scene as more of a web with people helping each other than a triangle and some sort of hierarchy of people you have to know and some ladder you have to climb. I feel like here it is more about enjoyment and fun. I do a lot better for myself out here career wise, so it’s kind of a win/win/win. I love it here.” Since coming out West, she has posted numerous performances on YouTube, and plans are moving forward for a second album.

“I have a lot of songs on YouTube and I am working on putting more up. Especially because the next album won’t be out for a little while because the process takes a long time, but I’ll be recording and have recorded some of my songs that will be on my next album on my YouTube. For the younger crowd, I’m a great Instagrammer too. I like to record my life in that way. The world is changing; the music industry is changing.”

All of the songs for a new disc are written, and she looks forward to fairly stripped-down arrangements, as on her debut, though this one may have a fuller sound. In the meantime, Rogo is expressing thanks to Kenneth Rexrode and Scott Clayton for helping her career momentum up to this point, as well as anyone who has been attending her shows. Her future goals include a California Coast tour to the Santa Cruz and San Francisco area. She also hopes for opportunities to be on bigger international tours, ultimately as an opening act for big-name artists.

Chuck Berry Was the Beginning of It All