February 2023
Vol. 22, No. 5
Chuck Berry Was the Beginning of It All by Ted BurkeApril 2017
Jeff Beck: A Tribute by Ted BurkeApril 2017
Marcus Petronius Bashore: The Best Seat in the House by T.E. MattoxApril 2017
Pacific Wave: A Surfin’ Safari April 2017
The Winter Dance Party 1959: The Night the Music Lived by Terry RolandApril 2017
Back with a Bang! Java Joe's Reunion at San Diego Folk Heritage by J.T. MoringApril 2017
Book Review: The Philosophy of Modern Song by Bob Dylan by Ted BurkeApril 2017
Rick Nash: Bass Man in Demand by Wayne RikerApril 2017
If Music Be the Food of Love, Play On: Dually Noted Pairs Fine Food and Fine Music by Paul HomiczApril 2017
Mod Revivalists the Trebels to Reunite for 40th Anniversary Show by Jim TrageserApril 2017
Advertisements 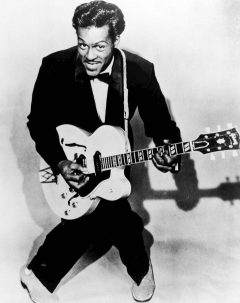 Chuck Berry, who passed away at the age of 90 on March 18, was the Beginning of it all. His is a shadow that falls over those who took up guitar after him. He created the language and vocabulary of rock ‘n’ roll, both as musician and songwriter. His body of work, truly, is the Gold Standard against which all others are judged. The foundation he was the (unintentional) architect of is broad, pervasive, an idiom, at once unique yet familiar, simple yet subtle, a kind of music that could be adapted any number of ways and continue to be renewed with each new visionary we plugged in a guitar and wrote a lyric of joy and confusion. He is, I think, to rock and roll what Harold Bloom claims for Shakespeare, the originating standard of genius by which all other artists in the arena are held to. What we have in Chuck Berry’s body of work is a collection of songs that achieve that elusive blend of styles in precisely the right proportions. His songs sold millions, it spoke to audiences across racial lines, his rock ‘n’ roll changed the way we engaged the world. It rocked.

His work was, essentially, the creation of rock ‘n’ roll as we think of it to this day. A sharp sense of ‘40s swing, the charge of a rhythm and blues beat, a guitar style combining a bittersweet sting of blues and the sprite, twangy clarity of Nashville-style guitar. Berry listened widely, taking in the grit of the blues, the earnest sincerity of country and western storytelling. The swing of R&B, charging it up with country-accented guitar lines, perfecting a limited but resolutely brilliant set of guitar licks that redefined how the instrument came to be played.

It’s been argued that Berry was the most important guitarist rock ‘n’ roll has ever known; one can, in my view, be a jazz guitarist although one might not have bothered to listen to or learn Joe Pass or Charlie Christian licks. If a player decides to forgo Chuck Berry’s sublime and simple genius and focus rather on the kneejerk hi-jinx of shredding, one relinquishes the right to be called a rock ‘n’ roll guitarist. If you can’t play Chuck Berry, you can’t rock. It’s that simple an equation. His solos are the best models of economy, with their double-stopped bends and twangy fills, all made buoyant with a crucial sense of swing. Decades of convoluted solos, once the example of what to do on the frets, have been swept to the curb, ashes of former glory, while Berry’s fret inventions are still with us, a part of the American memory. Knowing Chuck Berry’s sound, feel, and off-hand playfulness is a metaphysical necessity for the rocker; it was less a style to master than life style, a way of honing your wits and working your way through the tragic subject matter life awards us with.

And then there’s his particular genius as a lyricist. He was, as John Lennon proclaimed in the seventies that Berry was the original and the greatest rock ‘n’ roll poet. Not a philosopher, neither gloomy nor introspective, Berry had the genius to appeal to mostly white teenagers growingÂ Â  up in the ’50s, a black man with a talent for telling stories that, while hardly meditating on the Dark Night of the Soul, took on experiences and issues that were critical to young people. Dating, school, part-time jobs, homework, cars, dealing with loneliness, trying to fit into a world they didn’t make, Berry presented a splendidly idealized world of teens trying to make sense of the world as they tried to find their own path through it. What was profound was Berry’s skill, his literal mastery of conveying the scenario’s without prejudice or pretentious language. His diction was flawless, his word choice splendid, preferring ordinary words used in interesting ways, coming up with rhymes and resolutions at once surprising but credible.

You know, my temperature’s risin’
and the jukebox blows a fuse
My heart’s beatin’ rhythm
and my soul keeps on singin’ the blues
Roll over Beethoven and tell Tchaikovsky the news

“Roll Over Beethoven” by Chuck Berry

Berry created the rock ‘n’ roll songwriter as we currently understand it, the participant of events giving hot-take impressions or a narrator framing a story of daily frustrations, habits and quest of young Americans looking for both the meaning of life and fun. His language was colloquial, slangy, full of advertising coinages and mispronounced foreignisms, place names, an American hybrid of words consisting of short syllables drawn from telephone chatter to movie screen patter. His subject matter was the life and times of white teenagers, a simple terrain, but Berry’s treatment was rich, his language was subtle, his rhythmic accents were unexpected and his rhymes were ingenious, surprising, and fresh, commanding our attention to the tale he framed and relayed like the master he was. The language was direct, emphatic, uncluttered and scarce of decorative qualifiers. The words had immediacy and intimacy, and unforced statement of being, and rocked, swerved, and danced on the fast motion rhythm Berry’s fabled guitar chords. He was Whitman with a rhythm section, a cogent Kerouac, he was Eliot with a backbeat. His long string of hits were tight, vibrant, concise masterpieces, ageless innovations that motivated later talents with the Beatles, Rolling Stones, John Fogarty, Dylan. Speaking of Louis Armstrong, Miles Davis remarked, without reservation,”You can’t play anything on modern trumpet that doesn’t come from him, not even modern shit.”

Decades later, John Lennon’s famous line comes to mind, no less on point “If you tried to give rock ‘n’ roll another name, you might call it Chuck Berry.”

Echo Mountain String Band and the Importance of Jamming