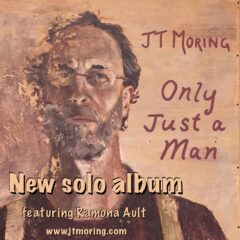 Only Just a Man is the debut solo CD from singer/songwriter and multi-instrumentalist, JT Moring. It’s just what the doctor ordered in today’s complex world, 13 delightful original vocal tracks of entertaining stories and humorous social commentary on the human condition through his life’s diary of experiences and adventures. A marvelous wordsmith, he sings and accompanies himself on a bevy of stringed instruments, including banjo, guitar, autoharp, mandolin, and bass throughout an eclectic array of folk music idioms. Midway through each track enters the mellifluous vocal harmonies of Ramona Ault, establishing a vocal combination reminiscent of the Weavers.
There are six short solo instrumental tracks that are mixed in cleverly as a respite between his story-telling tunes, including the opening track, “Roxy,” a welcoming guitar ditty with echoes of “Alice’s Restaurant,” and the closing track, “Over and Out,” highlighting the dulcet tones of the autoharp. In between is a featured contrapuntal string ensemble on “Kerfuffle Shuffle,” a Pete Seeger-style banjo ditty on “Better Off Dead,” a haunting minor key mandolin melody on “Prelude to a Storm,” and Moring’s channeling on guitar of Mississippi John Hurt on “Higher Ground.”
“Run Baby Run” sets the stage for Moring’s story-telling journal behind a happy and bouncy vibe. I lived on a mountain, I lived by the sea, I wandered through the wilderness, trying to be free, followed by the lighthearted and catchy “Low Tide.”
“Guerrero Negro” is a nifty country waltz about mishaps south of the border: nothing is going according to plan…and I feel like I’m gonna die. A humorous back and forth dialogue between Moring and Ault on “Down on the Farm” is followed by “Harvest Time in Humboldt,” eloquently narrated by Moring in true Woody Guthrie fashion.
“Welcome to the Neighborhood” is a social commentary gem from Moring’s pen, observing a neighborhood’s transition over a few decades: Mark next door had a garden in back…grow lights strung to a wooden shack…he used to bring us brownies with a bandage on his head…he set himself on fire, smoking in bed. A bit more serious tone follows with “Eyes Wide Open,” with the repetitive refrain: keep your feet upon the ground, there’s danger all around, followed by “Forty Acres and a Mule,” lamenting about the post-Civil War broken promises to freed slaves.
The lively minor key sea shanty, “The Devil and the Deep Blue Sea” is followed by the self-explanatory “Six Feet High and Rising: fetched a fiddle and photographs…put them over here on the homemade raft…grabbed the dogs…grabbed some food…go get your grandma down off the roof.
Much of Moring’s aquatic musings continue with “Business as Usual”: it’s a little late, talking about that levee…the time for that was months and months ago. A reflective tone is struck on “Good Old Boy”: that old man was a child once too…he played in the park and swam in the pool, before the optimistic concluding vocal track, “Hole in the Sky,” a fitting ending to a thoroughly entertaining CD. I’ve got a wife and children…and best friends in the land…I don’t care what people say…I’ve been a lucky man.