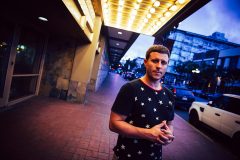 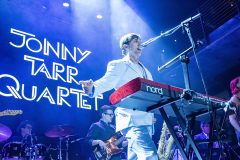 Tarr and his quartet in concert. 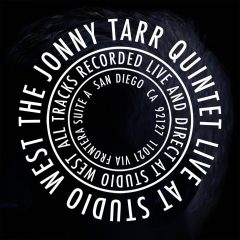 One of San Diego’s favorite soul/jazz performers, keyboardist Jonny Tarr is saying goodbye to California, but luckily for fans, it’s only temporary. Winner of the 2020 San Diego Music Award for “Best Pop Artist,” Tarr is relocating to his native Wales (UK) with his family for a short stay.

Originally from Cardiff, Tarr moved to San Diego in 2011. “I had visited California a few times previously and really fell in love with it,” he recalled. “On one of those visits, I met a girl who kindly took pity on me and asked me to marry her so I could stay in the country,” he said with a smile. “Nine and a half years later, we are still going strong with a four-year-old daughter and we could not be happier. She took a real chance on me. I am extremely lucky. She is an angel.”

While part of the reason for his temporary move back to Wales is financial, “We had always talked about spending a year in Europe at some point and this seemed to be the obvious time to do it, with no solid work commitments keeping us here,” Tarr said. “I would love Ivory, my daughter, to absorb a bit of Welsh culture while she is young and I want my family to have some extended time with her, too. Although, California is my home now and I will DEFINITELY be back.”

How does Tarr feel about his recent San Diego Music Awards win? “To be honest, I am over the moon about my SDMA win,” he said. “It is like a huge relief to have been validated in this way after the many years of grinding away at the coalface of music. The recognition has also opened a few doors that had been closed to me career-wise up until now.” He recognizes that “the award is what you make of it. You can treat it with respect and carry it forward with you to take you on to the next level, or you can settle on it and not make it work for you. I feel extremely lucky and proud of it. As well as very grateful to all the people that took the time to vote for me.” He notes stiff competition this year. “In my category alone there were some amazing artists who I respect a great deal and they were all good enough to have won it. A special shout out to Veronica May on that one. I am a big fan!”

Tarr’s decision to make his most recent album, Live From Studio West, a live affair was pragmatic. “I chose to release a live album because the final submission date for the 2020 SDMAs was pretty quickly approaching. I trust my band’s abilities so much that I knew we could pull off a solid live album before submissions closed. A studio album would have taken so much longer to get right.” He points out that his band—all top-flight players—is honed through rigorous rehearsals and steady road work. “We had been gigging intensively for a year and I knew we could record a faithful representation of a Jonny Tarr Quartet show. Especially as Miles, our drummer, knew Andy Walsh over at Studio West, which is my favorite live room in SD. Huge shoutouts to the best band and best bandmates in the world—Monette Marino (percussion), Ken Dow (bass/BVs), Matt Clowminzer (guitar), Miles Clowminzer (drums/BVs)—all totally class acts who make me proud to be the worst player in my own band.”

Tarr reflects on the differences between recording live and in the studio. “Your band has to be HOT to record live. If you are on a budget—and I was—you have to know your band is gonna smash it. We ended up running our sets three times each and simply took the best take. If you know my live show, you know that we segue three or four tunes together before taking a break. There was hardly any room for error. I knew my guys and girl could not just pull it off but do it true justice. In the studio you can do as many takes as you like and manipulate so much these days. And I love that way of recording too, but I am really glad we went for a live gig approach. It really paid off.”

Although perhaps best known for his keyboards, Tarr is a gifted player on several instruments. “My first, which I studied my music degree on, was saxophone,” he explained. “I was in fact inspired to play that by a childhood friend, Osian Roberts. He was always streets ahead and I learned so much from him, a badass (even now). But these days I consider myself a singer more than anything and that has more to do with wanting to write songs than be a musician/player. You can see above who all my vocal and songwriting influences might be.”

For his part, Tarr’s favorite thing about being a musician is “being my own boss,” he said. “Your level of success is pretty much down to you. You have to work incredibly hard on things that are not music related and you might not always achieve things at the rate you set out to, but there is a freedom to being a musician that I would not swap for anything.”

Next up for Tarr is recording/releasing and promoting an album that he has written during lockdown. “I am going to be working with a record label in the UK called Thump Records to get that out and hopefully we will have it done by the end of the year,” he said. In the meantime he is going to be spending time with family back home “and also gigging and hanging out with my old musical family as much as possible. I will be live streaming weekly as soon as I get myself situated and can’t wait to get that going again.” But he’s happiest that his family will be visiting his homeland. “I want my wife and daughter to deeply experience Wales so that maybe they understand my idiosyncrasies a little bit better,” he said good naturedly.