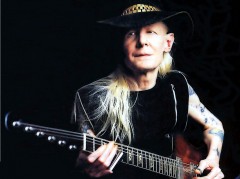 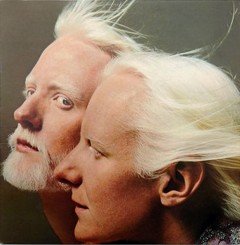 The flowing mane of white hair, the skinny guy with all the tattoos, and the cowboy hat with two rattlesnake skulls on the brim, howling and playing lightning-fast guitar riffs — Johnny Winter was always an iconic figure. His name was so cool, kind of like “Billy Summer,” and being snow-white, it fit him perfectly. The blues-rock guitar virtuoso passed away July 16 at age 70 after a career marked by breakthroughs, comebacks, personal health struggles, and a lot of great music. His clean, quicksilver blues guitar lines — on both regular and slide guitar — and his soulful, growling voice conveyed an old soul who had lived the blues. In his youth he took Texas blues nationwide, becoming an American guitar hero after the British blues boom made players like Eric Clapton and Jimmy Page superstars; later on, he played on and produced excellent blues albums by blues great Muddy Waters, while returning the focus to the blues himself.

Johnny was born February 23, 1944 in Beaumont, Texas, like his younger brother Edgar, an albino, his crossed eyes seeing only 20/400 vision in his better eye. Having to take special education classes in high school, he got into a lot of fights, which he felt led to a sense of alienation. He later attributed this to his kinship with black musicians. “We both had a problem with our skin being the wrong color.” Growing up, he and his brother listened to plenty of ’50s rock ‘n’ roll on the radio-the Big Bopper of “Chantilly Lace” fame was a local disc jockey. Johnny started on clarinet, then ukulele, but gravitated toward guitar. He and Edgar formed a duo based on the Everly Brothers and in 1959 appeared on local TV several times, recorded singles, and went to New York for Ted Mack’s Amateur Hour auditions. Around this time, Johnny was sneaking into black blues clubs to hear Waters, Bobby Blue Bland, and BB King play the blues.

The early and mid-’60s was dues paying time for Johnny, who played in Chicago (where he met Mike Bloomfield, later with the Butterfield Blues Band), and the Southern blues circuit, in bands of his own, and with Edgar. He cut some singles for small labels and barnstormed, settling in Houston in ’68. After the Bay area success of fellow Texan (and friend) Janis Joplin, Steve Miller, and other acts, there was considerable interest in the Texas blues scene. His break came after a Rolling Stone story in 1968 mentioned him, the “130 pound cross-eyed albino with long fleecy hair playing some of the gutsiest fluid blues guitar you ever heard.” Johnny became something of a sensation, with a New York manager and a bidding war to land him a major record deal, signing for a rumored, unheard-of $600,000. It didn’t hurt that Columbia label executives were in attendance in December of ’68 when Bloomfield had him sit in at the Fillmore East for a blazing reading of BB King’s “It’s My Own Fault.” His early album bassist Tommy Shannon recalls his quick rise: “We starved our asses off for a while. One night we were sleeping on floors, and the next night we had a big mansion in New York. It was that quick — seriously.”

In 1969, with a trio that included Shannon, who later would play bass for Stevie Ray Vaughn, he quickly recorded his debut for his new label, Johnny Winter. Second Winter, with his brother joining the band, soon followed, while earlier recordings began to appear on other labels. His best blues playing on record likely appears on these discs, with covers of blues standards like “Mean Mistreater,” and “Be Careful With a Fool,” along with old time rockers like “Miss Ann,” and “Johnny B Goode.” The latter, along with his blistering slide version of Bob Dylan’s “Highway 61 Revisited” from Second Winter, became highlights of his live shows — small wonder, since hearing him tear into “Johnny B” always seemed to sound like he was singing about himself. He played at Woodstock, though he wasn’t included in the film version.

His albums charted but weren’t million sellers, and he tried a more mainstream rock approach in 1970 with a full band, in fact, the McCoys of “Hang on Sloopy” fame. The band and album Johnny Winter And contained some superb tracks, including Rick Derringer’s “Rock and Roll, Hoochie Koo,” and his own “Guess I’ll Go Away.” A critical success, it flopped commercially. Johnny and the band, which also featured Derringer in a dual lead guitar format, made up for it with a live album the next year. Sticking to old-time blues-rockers from his early albums and covers like “Jumpin’ Jack Flash,” this popular album captured lightning in a bottle: Johnny Winter at the peak of his powers —Â  flashy, raw, and overpowering, leading a hot band.

It would also be the last Johnny would be heard from for a while. A heroin habit took him out of commission for most of the next two years as he underwent lengthy hospitalizations in the days before drug rehab. As Dave Marsh put it, “Drugs, yeah, he took drugs, including all the wrong ones. He was a pretty bad mess, with a drug habit he did not discard for a very, very long time. He never tried to hide it much.” Being an important guitarist with a hard drug problem put Johnny into a not-small club that shelved Clapton at the same time, and would also include Bloomfield, Page, Keith Richards, Jerry Garcia, and many others. For the most part, his music didn’t suffer.

The first of his comebacks would be with the release of Still Alive and Well, in March 1973. This disc marked his return to full-time performing and touring and was a triumph, with a hot version of Bill Broonzy’s “Rock Me Baby,” Derringer’s title track, and “Silver Train,” written for Johnny by the Stones’ Mick Jagger and Richards. Johnny was back, and 1974 brought more of the same with Saints and Sinners. John Dawson Winter III, also from ’74, was in the same mold, on his manager’s new Blue Sky label. While his studio albums featured many of his own compositions, 1976’s Johnny Winter Captured Live! was packed with hot guitar and rock ‘n’ roll covers — and only one of his originals; it barely made the charts. He also appeared that year on the excellent Together — Live with brother Edgar, whose career as a keyboard and sax-playing band leader was more commercially successful than Johnny’s, with three top 25 albums.

In 1977 Johnny had an opportunity to fulfill a childhood dream when Chess Records went out of business and he produced and played on an album by Muddy Waters on Blue Sky. Hard Again marked a comeback for both performers. The disc had a gritty, hot-mic sound that earned a Grammy, and Johnny was on board for two more Grammy-winning Waters discs, I’m Ready (1978) and Muddy “Mississippi” Waters — Live (1979). He was back playing the blues, although his guitar contributions on these records were restrained. No surprise, his studio release in ’77 was Nothin’ But the Blues, a collection of Chicago-style tunes using Waters’ band and sounding a lot like the old master. White, Hot, and Blue from ’78 followed suit, though 1980’s Raisin’ Cain was more like his early ’70s work, with rock tunes and a cover of “Like a Rolling Stone” mixed in with the blues tracks.

Four years passed without a record contract, then Johnny recorded Guitar Slinger for Alligator records, the first of three discs for the label that put the spotlight firmly on his blues talents, with tunes like “I Smell Trouble” and “Third Degree.” The more relaxed, unhurried blues on these albums led Allmusic’s William Ruhlmann to comment about his 1985 Serious Business disc, “Maybe Johnny Winter isn’t trying to be a superstar any more, but his striving to be a consummate bluesman is wholly successful.” He was inducted into the Blues Foundation Hall of Fame in 1988.

For the next several years, he continued to release the occasional studio album, including 1991’s Let Me In, and Hey, Where’s Your Brother? from ’92, which included both Johnny and Edgar. Like his Guitar Slinger disc, this one was nominated for a Grammy. Otherwise, he concentrated on live playing for the balance of the ’90s, most notably Live in NYC ’97, which featured him burning through a set of tunes selected by his fan club rather than hits, including Freddie King’s “Hideaway” and Ray Charles’ “Blackjack.” His official live efforts were continually competing with unauthorized releases and bootlegs; one biographer estimated that only about 15% of his commercially available recordings were legitimate. He countered with releases of a Live Bootleg Series, discs of archival footage of his shows produced by him with good sound, numbering 11 CDs to date. Johnny was back in the studio for I’m a Bluesman in 2004. The album was a top 40 seller, gaining him new fans.

He was now a respected journeyman, releasing the occasional album, living quietly with his wife in Connecticut when not playing 100 or more shows a year. His increasingly frail health (he had been playing sitting down most gigs since the ’90s) was apparent at Eric Clapton’s Crossroads festivals, in 2007 and 2010, with clips of the 2010 appearance showing his playing to clearly suffer from his physical condition. A decades-long dependence on methadone, combined with chronic alcohol intake and prescription drugs, had reduced him to a reported 90 pounds. With help from his manager (guitarist/producer Paul Nelson) and his doctors, he was reported by Nelson to be weaned from the drug, quit smoking, and to have gained 40 pounds over the course of a year; by 2012 he was clean and sober and even had lasik surgery to improve his vision. In the meantime, he released Roots, a strong 2011 album with Edgar, Nelson, Derek Trucks, Warren Haynes, and many other guests on hand, but above all demonstrating Johnny to be playing and singing much more the way his fans had grown to expect. It also set the stage for a 2014 follow-up, to be released this month, titled Step Back, which includes appearances by Clapton, Billy Gibbons, Joe Bonamassa, and others. The news about his passing, in a Switzerland hotel room while on tour of as yet undetermined causes, means that this was to be his last trip to the studio.

Johnny Winter will surely be missed. His Gibson Firebird, fringe jackets, and manic energy are ingredients in blues and rock music rarely seen any more. His music laid the groundwork for fellow Texan Stevie Ray Vaughn to take the blues-rock world by storm in the 1980s. Highly regarded by legions of guitarists, especially blues players, his ranking on Rolling Stone’s greatest guitarist list at number 63 is hilariously low, as Dave Marsh writes, “He maybe wasn’t better than 60% of those who ranked higher.” He is likely one of the best and most imitated players of slide guitar ever, and his early albums provided the gateway to the blues for much of a generation of young fans, and helped to provide a link between old school blues and nascent Southern rock, just starting when he came up. His respect for the established blues form resurrected Waters’ career, and led him to call Johnny his “adopted son.” When asked how he’d like to be remembered, the book Raising Cain relates him answering, “As a good blues player.” Amen to that.

Gerry Goffin: Beyond the Brill Building