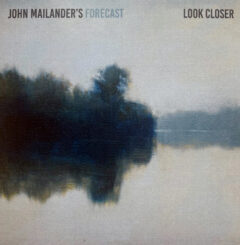 Former San Diegan John Mailander has relocated to Nashville, and since his last solo album in 2019 he has put together a band, John Mailander’s Forecast. Look Closer is the full-length debut by the fiddle specialist and multi-instrumentalist as a bandleader.
The music on the six tracks, four of them Mailander compositions, is drawn from just about every conceivable source and genre, on a disc recorded “Live in one room, masked, socially distanced, and musically close” last summer. It is a showpiece for Mailander and his band members. Besides Mailander (on fiddle, loops, gong, and Wurlitzer organ on one track,) the crew is David Williford (tenor sax and bass clarinet), Jake Stargel (guitar), Mike Roudabaugh (drums), Chris Lippincott (pedal and lap steel guitars, Wurlitzer), and Ethan Jodziewicz (bass), plus there are featured vocalists on two of the tracks.
The album is a triumph of eclecticism, offering songs that mix acoustic and electric instruments and are often launching pads for improvisation by the instrumental aces in the band; there are Americana flavors, raucous and inventive jazz, and interesting covers. Some songs are soft and ethereal mood pieces, while some others offer a sonic time machine trip to the salad days of fusion jazz last century. The material is fully realized, the six tracks fill 37 minutes but are continuously turning over new ground.
The program kicks off with “Returning,” which after floating in with quiet pizzicato statements, takes the listener through several building movements that variously feature two channels of fiddle doing a sonic duel, acoustic then steel guitar appearances, and nice unison follow through by Mailander as it jumps into the fusion pool with both feet.
Fans of Joni Mitchell will recognize the first cover, of her “Borderline.” Mitchell had made her case as an inventive jazz figure by the time of this track from the Turbulent Indigo project, and Kristina Train doesn’t reinvent the wheel on a vocal that echoes the original while it pays homage to Mitchell. “But It Did Happen” starts off with some nearly free-form spacey fiddle and horn jamming by Mailander and Williford that recalls John Coltrane and Don Cherry’s 1966 trail blazer The Avant Garde. The album’s title track has a lot going on as it starts subdued, with some unison jazz hooks that grow in the first movement to sharp sax fills, then resolves from quieter, funky scales into a building dynamic maelstrom of hot fusion guitar playing in Stargel’s big moment on the album.
The instrumentation for “Song for John” is a slow, rolling piece of blues with piano leading the way, joined by fiddle. More pizzicato comes in, then acoustic guitar as it gradually picks up a simmering steam. A solo stretch for Jodziewicz and his bass sets up matters for one of Mailander’s better solos as the band members keep jumping in for individual opportunities to shine. Lucinda Williams’ “Dust” is the closer, and again the lead vocal (by Maya De Vitry) is similar to Williams’ approach, but the band starts quiet and controlled only to back her with an instrumental cascade as she sings almost hypnotically, “Even your thoughts are dust.”
The new one by John Mailander’s Forecast, Look Closer breaks a few new trails while showing a steady grasp on the old ones. A must-have for anyone that enjoys jazz fiddle.