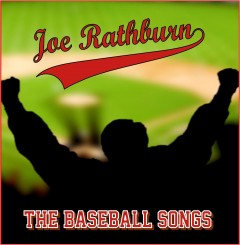 Play Ball! Baseball season is here again, just ask Joe Rathburn. The longtime fixture on the San Diego roots music scene is not only a diehard fan, but has played outdoor gigs at the Tin Fish, half a block from Petco Park before Padre games since the park opened, over 700 games. Entering his 10th year playing in the shadow of the ballpark, Rathburn had an idea: to record a CD of his favorite baseball songs.

The Baseball Songs was “a miracle,” with Rathburn able to raise (via Kickstarter) the funds to produce the disc in an unheard-of 20 days, and then record and produce the disc and the artwork in less than a month. Helping were the efforts of many top local studio cats: “Nucci” Cantrell, Dennis Caplinger, Ben Moore, Jim Reeves, Sharon Whyte, and others, with Jeff Berkley doing the producing, mixing, and recording.

Rathburn’s folksy vocals and deft guitar and mandolin work are the focus of 10 tunes that bring together classic sing-along and story tunes, with an original. All share a good-time, smell-the-grass and popcorn feel that comes only from the ballgame and ballpark.

Of course, “Take Me Out to the Ballgame..and Swing It” gets things started, and swing it does, with Rathburn and Caplinger jumping out of the waltzy sing-along into a mando/fiddle jazz-up with just a touch of Grappelli and Django. “Centerfield” may be the best baseball song written in decades, and the version here does it justice with a vocal that harkens to John Fogerty’s, and a lively Hammond B3 pumping the melody as Caplinger adds tasty dobro slides. Don Schlitz wrote “The Gambler,” and his “The Greatest” tells of the of the whimsy that dwells in the mind of every young kid with a baseball dream.

Rathburn puts the famed poem “The Ballad of Casey at the Bat” to music, and his homey reading makes the hallowed words come to life-right up to when Casey steps up and beloved veteran Padre announcer Jerry Coleman takes over the play by play for the big moment. A smooth cover of “Mrs Robinson” is here; after all, “Where have you gone, Joe DiMaggio?” Well, “Joltin’ Joe” left, and the ultimate baseball antihero came along: “Roger Maris.” The sleeper track of the disc has a somber message not only about Maris’ fascinating life story, but also today’s game: “I just did what God gave me to do/ Without a needle or a pill.”

Calman Hart’s “Bad Day,” from Berkley Hart’s Crow album, is a perfect fit, the tale about losing the big game in the worst way. Sometimes, the ball doesn’t bounce your way, “That’s baseball.” The best baseball book ever written, per Rathburn, is “The Boys of Summer,” and the song of that name is here, with his standout guitar and vocal work. The disc wraps with a moving personal memoir of Rathburn’s Michigan youth, listening to Tiger games, “Extra Innings.” Those who know who Al Kaline, Mickey Lolich, and Willie Horton will get an extra nostalgia payoff as the good old days are celebrated.

The Baseball Songs is the perfect CD to play on the way to the ballpark.

ROB BONDURANT: Through My Hands