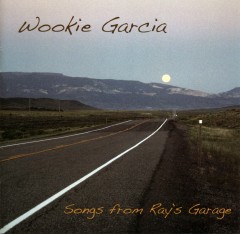 “Eleven songs about life, love and the pursuit of happiness in the modern world…”

That’s a pithy enough description but it doesn’t quite do justice to Chula Vista’s Wookie Garcia regarding their excellent debut (the quote is from their website).

Rising out of the remnants of two other San Diego bands (Hatfield Rain and Usual Suspects) Wookie Garcia is a quartet led by guitarist/vocalist Kyle Ince whose songs dominate the material on Songs from Ray’s Garage. Bassist Mark Tucker and drummer Jason Sumner-LaRussa lay down a solid foundation but what I’m really digging is the sound of lead singer Brian Sharkey’s voice — the guy has really great timbre and knows just where to place himself in the mix (he also contributes a fair amount of songwriting muscle to the proceedings as well). Organist and pianist Robert Fedeli isn’t listed as a member of the group but he really ought to be because his Benmont Tench-like textures really fill out the sound wonderfully.

And Benmont Tench would be an apt reference point because in their finer moments they sound as competent and sonically rich as the Heartbreakers without the nasal trademark of Tom Petty’s vocals.

With guest violinist Jesse Greene at the fore on the album’s opener “Rosabelle Believe,” it is a misleading first impression and atypical of how the band sounds the rest of the time. The two main sonic distinctions are the liberal use of a Hammond B3 organ (which, I’m convinced is impossible to sound bad) and a smattering of Ince’s harmonica, which also sounds great.

If I were the A&R guy for this group I would definitely recommend releasing “Young Again” as the lead single. It has a great hook in the chorus and again, I’m loving Brian Sharkey’s vocals.

It’s tempting to call these guys geezers cause they’re clearly not fresh out of high school. But with the maturity comes adult concerns in the lyrics like how to feed to kids and keep your head above water when faced with the responsibilities of making ends meet. But there’s nothing weary sounding about the songs and they certainly don’t sound frivolous. The songs pack some hard-earned wisdom that usually only comes with having been around the block a few times. Particularly on the song “Fortune Cookie.”

There’s an excellent cover of Stan Ridgway’s “Harry Truman” (originally found on the 1991 LP Partyball and definitely not the Chicago tune of the same name). It’s a bit darker than the originals and the contrast works well.

The cover photo shows the open road stretching out toward a full moon in the distance, and that’s an apt visual metaphor for what lies ahead for this group. Make a wish, fellas, because it sounds like you are in contention for breaking out of the local market and transcending the garage from where these songs came. Wookie Garcia has a warm, life-affirming sound and they appear to have good times ahead. Check ‘em out when you get the chance.