August 2022
Vol. 21, No. 11
Jimmy Woodard: The Swingin’ King From Corpus Christi by Eric LiebermanFebruary, 2022
Tiki Oasis Celebrates 20 Years of Exotica Mayhem and Fun  by Andy RasmussenFebruary, 2022
The Lady Doctors Will See You Now by Laura PrebleFebruary, 2022
Happy Birthday, Jeannie! Jeannie Cheatham Celebrates her 95th Birthday this Month by Jim TrageserFebruary, 2022
Zach Caplinger: A Gifted Musician in his Own Right by Dwight WordenFebruary, 2022
The Return of IPO San Diego: After a Five-Year Local Hiatus, David Bash’s Unique Music Festival Makes a Much-Anticipated Return by Scott SamuelsFebruary, 2022
This Saw Is Not a Tool by Derek ShawFebruary, 2022
Our Redneck Poet, Merle Haggard by Mark PulliamFebruary, 2022
Linda Hoover: I Mean to Shine by Jon KanisFebruary, 2022
Tom Griesgraber: Now a Member of the California Guitar Trio by Paul HomiczFebruary, 2022
Advertisements 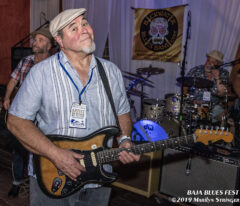 I first met Jimmy somewhere around 1981, by which time we were both living in San Diego. Jimmy moved out here from Corpus Christi, Texas, and yours truly from New Jersey. I was playing in the King Biscuit Blues Band and Jimmy had a Charlie Christian tribute band called Wholly Cats. At the same time there was a singer/harmonica player by the name of Tom Moore, who started a band called the Five Careless Lovers, which both Jimmy and I played in together for a short period of time, before my dear departed friend Scott Corey took my place in that band.
Even though Jimmy was the cat from Texas, I was probably more influenced by the young Texas guitar slingers like Jimmie Vaughan and Anson Funderburgh at that time, while Jimmy was the big band, jump blues/swing guy. And man, he could play that stuff as good as anyone! I was playing the predictable Stratocaster, while Jimmy was playing a big old Guild archtop long before they came into vogue with us young striving blues players. In fact, I recall the great guitar player from the Paladins, Dave Gonzalez, saying that it was seeing Jimmy that inspired him to start playing an archtop. And I don’t know whether it’s mere coincidence or not, but for the next 40 years, Dave’s archtop of choice was also a Guild.

In the interview below, Jimmy talks about one of the highlights of his 50-year musical career—when his band the Swingin’ Kings backed up guitar great Kid Ramos at the Gator by the Bay Festival in San Diego. I distinctly recall Kid telling me afterward how much he wanted to bring the Swingin’ Kings to Europe to play with him over there. And I remember the night I was personally in such awe of Jimmy’s playing that I went up to him and asked, “Man, how do you play swing like that,” to which he replied, “Get yourself a Charlie Christian record!” And you better believe that I was at Tower Records the very next day, doing exactly as Jimmy advised.
Jimmy has been a well-respected fixture on the San Diego music scene for over 40 years, both leading his own great band, the Swingin’ Kings, and as a much sought-after sideman for the likes of the Five Careless Lovers, Jonny Viau’s Blues Allstars, Michele Lundeen, Backwater Blues Band, and intermittently with Sue Palmer’s Motel Swing Orchestra. Jimmy has always had my utmost respect and admiration as both a musician and a person, and it is my honor to be able to interview him for this long overdue—and much-deserved—feature for the San Diego Troubadour.

Eric: Hey Jimmy, let’s go back to the very beginning. Do you recall your earliest musical inspiration?
Jimmy: I grew up in Corpus Christi, Texas. My mom played piano and sang in the church. I got my first guitar, which was a Kay with nylon strings, with S&H green stamps when I was about 10 or 11. A kid who lived down the street had an old Stella with rusty strings, and he showed me how to hold it and make a couple chords. I was left handed, but because I copied him I started playing like a right-handed person.
My sister had some 45 records, like Smokey Robinson and the Miracles and the Everly Brothers. She was ten years older than me, and when she got her driver’s license and would play the car radio I started hearing the Beatles, the Rolling Stones, the Animals, and the Kinks. And it was then that I knew I wanted to rock out! I also thought the song “Classical Gas” was incredible.
I took lessons from a woman who was kind of a folk player, and she had me get a songbook by a group called the Weavers. I found a version of “House of the Rising Sun” in it, which I was already familiar with from hearing the Animals’ version on my sister’s car radio, so I learned it. There was a recital coming up, and I wanted to play “House of the Rising Sun,” but when my mom, the daughter of a strict Baptist preacher, read the words she about had a cow. So, I learned “In the Hall of the Mountain King” and ended up playing that instead.
I was learning songs like “Gloria,” “Wipe Out,” “Satisfaction,” and “Louie Louie,” and I liked “Last Train to Clarksville” by the Monkees. I learned simple versions of these songs pretty quickly. Around this same time, my next door neighbor happened to be a big country music fan, and he had tons of 45s by artists like Buck Owens, George Jones, Patsy Cline, and some Elvis, too.
I talked my Mom into getting me an electric guitar, and she agreed if I could chip in some of my own money, which I somehow managed to save from my job mowing lawns for two dollars a yard. A guy at her work was in a country band; he sold me a Kay electric guitar, and I got a little Kalamazoo amp to play it through.
When I was 14 I started surfing and set the guitar aside for a couple years. But then underground FM radio started happening and I was hearing stuff like Led Zeppelin, Cream, and Hendrix, which inspired me to get back into the guitar. In my junior year of high school I had a friend who knew some older guys that actually played in bands, and they showed me that all my rock guitar heroes got their stuff from blues guys like B.B. King, Freddy King, Albert King, T-Bone Walker, and Otis Rush. I was hooked and started buying blues records. B.B. King’s Live at the Regal was the first, and then I bought every blues record I could find. I spent hours in my room with them, trying to learn how to play, and I would get these older guys to show me stuff, too. They also turned me on to jazz records. My friend Tom Robinson, who was learning to play sax, and I would sit outside the bar where our mentors were playing and listen, because we were too young to get in. We would stay until they finished and then help them load out. And this is how I got to know most the working musicians around town. One of the sax players was Joe Sublett, who currently plays in Taj Mahal’s Phantom Blues Band, and there was a drummer by the name of Chris Layton, who became Stevie Ray Vaughan’s drummer for pretty much the entirety of his career until his tragic and untimely death in 1990.

The Other Favorites: Josh Turner and Carson McKee Stop in San Diego on their U.S. Tour

The Rolling Stones Drop “Brown Sugar” from their Set List