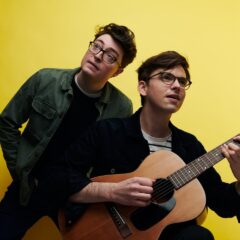 The Other Favorites: Josh Turner and Carson McKee.

“The Other Favorites, yeah that goes back to when we first formed in eight grade.”
“In eight grade you’re not thinking, ‘Okay, this is going to be our band name for the next 15 years; so you better make it good!’”
Carson McKee and Josh Turner are bantering back and forth as can only friends who have known each other for half their lives. Individually, and together as the Other Favorites, they have become YouTube sensations, with some of their videos tallying up millions of views.
The two tap into the rich heritage of American popular music from decades past, with songs as varied as those of Paul Simon or Johnny Cash or standards such as Autumn in New York. They even throw in a tune or two by ABBA or a disco hit. “I grew up with that music,” says McKee. “The stuff that my father played around the house was the stuff that he grew up listening to. So that’s my frame of reference.” And classics from yesteryear were the first tunes his father taught him when he learned how to play guitar.
Turner echoes his music partner, saying that his father was a teen when the Fleetwood Mac mega-hit “Rumors” came out, adding, “My grandfather was a college music professor and my grandmother was a professional accompanist and piano teacher. They had a lot of classical music around their house; so I have more of a bent toward classical guitar.”
They compose and perform original music, with much of it recalling the sounds of the past or containing classical influences. “From a compositional standpoint it’s rare that I’m deliberate enough or clever enough to think that I’m going to take this idea from a composer like https://youtu.be/w5SC1uIxXhkSchumann,” says Turner. “I think that for some artists like Paul Simon, there is always a subconscious influence, even if it’s not something that I’m deliberately thinking that I’m going to write something Paul Simonesque.”
Music videos have been around for a long, long, time. Often featuring the latest pop hits, and more often featuring bikini clad girls, Scopitones combined all the charm of jukeboxes with the excitement of video in hundreds of bars and cafes through Europe and the U.S. during the sixties. MTV launched in 1981, broadcasting highly produced videos with lots of fog, high heels, and slow motion everything.
A little taste of the Other Favorites, performing an original song:

But since the advent of YouTube, along with affordable audio production, a lot of folks have taken to making music videos at home, or at least in more humble surroundings than a Hollywood soundstage. A click around YouTube can bring up any of these performers, from Post Modern Jukebox and Scary Pockets to Casey Abrams, Haley Reinhart, and hundreds more. This new generation of videos can be offer an intimacy to the viewer that was near impossible from the glitzy productions of MTV-type videos.
The duo is setting out for a tour of the U.S. dates include Philadelphia, New Orleans, Dallas, Phoenix, and over a dozen other cities. The tour includes a stop here in San Diego as well. “I think that a lot of people just seeing something that they have only seen on the internet translated into real life is sort of thrilling in its own way, that we can actually play this stuff and didn’t just get one lucky take,” says Turner. YouTube stars Reina del Cid and Toni Lindgren will join the Other Favorites for their San Diego performance.
Both musicians have relocated to Brooklyn in recent years. Turner studied music at Butler University in Indianapolis, remaining there for a year after. “But I knew that if I wanted to do music full-time, I needed to go to a city where that was possible,” he says. “Now I have a lot of friends here who play a lot of different styles of music and play different instruments; so if I need something for a YouTube video or a recording session, it’s great to have this kind of network. I also find it a creatively invigorating place to be.” McKee says, “The sheer number of places to play and the people to collaborate with is a huge plus to being here. The atmosphere of this city and the artistic community that lives here, everybody is really motivated.”
After the tour, Turner anticipates collaborating with others, including fellow YouTube star Allison Young. McKee is contemplating coming out with an EP of his own. They will be joining forces as the Other Favorites come fall for a tour of Europe.
The Other Favorites perform at the Soda Bar on February 23.

Richie Furay: Through It All