February 2023
Vol. 22, No. 5
JIMMIE DALE GILMORE: Hillbilly Zen with a Honkytonk Heart of Gold by Terry RolandApril 2012
Examining Bob Dylan’s Love Sick Blues by Ted BurkeApril 2012
John Densmore: An Invitation to Dance on Fire by Terry RolandApril 2012
A Father’s Day Story: The Courtship of Harry Nilsson’s Son, Zak by Terry Paul RolandApril 2012
Jazz 88 Keeps Pumping Out the Tunes: Station persists despite numerous challenges over the years, including Coronavirus by Michael J. Williams and Jim TrageserApril 2012
Me and Ronnie Earl by Eric LiebermanApril 2012
Lawrence Ferlinghetti: America’s Poet by Ted BurkeApril 2012
Q & A with Gabe Lapano: After the Rain and Beyond by Andy RasmussenApril 2012
Remembering Sam Hinton by Paul HomiczApril 2012
Band of Brothers: The Liggins Brothers by Bart MendozaApril 2012
Advertisements 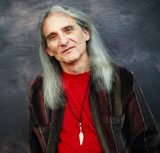 Americana music is about connection. It’s about how the past shapes the present and often gives us gifts along the way that helps with the journey ahead. Jimmie Dale Gilmore is living evidence. Born and raised in the West Texas Panhandle, he absorbed the music of his land and his times from his family, especially his father and his uncle. As the music was born inside of him, he met his friends, Butch Hancock and Joe Ely in Lubbock, Texas. Along the way they would meet a hitchhiking gypsy named Townes Van Zandt who would give them his first solo album he was carrying in his backpack. Their lives would never be the same. It would lead to the formation of the Flatlanders, the 35-year-old reoccurring band.

Each member of the Flatlanders brings something unique to the table. Jimmie Dale Gilmore’s singing could be the quintessential country-folk voice of the land. His quality weaves through the reverb of big Texas electric guitars and could easily join the April west Texas waves of spring winds that gust through the dust, oil, and tumbleweeds of Lubbock. His voice has the kind of space similar to those prairies that reach out and allow you to see for miles. His voice gives vision to even the most ordinary songs and can infuse classics like “I’m So Lonesome I Could Cry,” with a unique soul. His body of work is filled with graceful, gentle country songs, haunting originals, interpretations of classic Hank Williams and Lefty Frizell, and a generous amount of nods to Townes and compadres Joe and Butch. After all, he was named after the legendary Singing Breakman of the ’30s: Jimmie Rodgers.

In the interview that follows Jimmie Dale tells the stories of his relationship with Hardly Strictly Bluegrass founder, the late-great Warren Hellman. He also talks about the magic connection of musical instruments as they are handed down through his family. It’s a perfect illustration of how music shapes our lives when we’re intuitive enough to notice. Whether it’s from his long nights hearing the native songs of the Panhandle or his deep study of eastern philosophy, Jimmie Dale Gilmore continues to offer these gifts through his life and his music. It’s often said of those with long careers to the point of clichÃ©, but with Jimmie Dale, it’s the absolute truth — he is an American treasure.

SD Troubadour: First let’s talk about your relationship with Warren Hellman and the Wronglers.

Jimmie Dale Gilmore: Warren became a friend when I first appeared at Hardly Strictly Bluegrass. I didn’t realize at first who he was. When I first met him I didn’t realize he was the benefactor of the entire festival and it was a gift to the city of San Francisco and to musicians. Dawn Holiday produces and organizes the festival every year and made a special point of introducing us the second year. She had this idea we’d hit it off because of the music. And we did! I’d only see him once or twice a year.

SDT: How did things develop into the Wronglers?

JDG: I knew he was taking banjo lessons. He learned through his teacher that in order to get better he’d need to start playing with other people. Colleen was Warren’s business associate. She had been a bass player in punk bands. Then, they got Heidi who is a real pro. She’s a fiddle player. She became Warren’s coach for the music. They became a real band then. They put out a record of old timey music.

SDT: So, that’s where you came in.

JDG: Yeah. It’s a part of my musical make-up. They were here in Austin a couple of times and I went to hear them. I came up with the idea of joining them on a whim. Warren loved it. He said, “Let’s do it!” That was two years ago. We figured out songs we wanted to cover over the next year. Then, we did Heirloom. I was always regarded as a guest of the band.

SDT: What about Warren’s cancer?

JDG: Warren knew before the Wronglers [did]. They thought it was a mild form of Leukemia. He put off treatment to do the Wronglers tour. He really wanted to tour. “I’m gonna do this treatment, but we do the tour first,” he said. He didn’t want anything to interfere with it and after he started treatment, he wouldn’t be able to travel. They said he died of complications from the chemo. It wasn’t the cancer that killed him. But, it was really in character for him to do things this way. He had always driven himself all of his life to achieve. It’s like his drive from his entire life had weakened his body.

SDT: What was your overall impression of your friendship with Warren?

JDG: It was really a pleasure getting to know him and to be close. He obviously was a good businessman. He was powerful, but only when he did what he did. He was also so gentle, especially when it came to his life in the music.

SDT: Let’s talk about your musical connections to the past. You released an album in 2004 of songs dedicated to your dad. From your story, I know he was a great influence on you.

JDG: My dad played guitar. He was a better guitar player than me. He played electric, which was unusual for that part of the country. We always shared the music. That was one place we all came together. Even if we had differences or dysfunctions through the years, we always had the music.

SDT: Can you tell me about your first guitar?

JDG: Yes. There are a few stories there. My uncle, my dad’s youngest brother, his name was Darrah, had something to do with it. When I was very small my mom and I lived with my grandparents. My dad was in the army. He was in India at the time. Uncle Darrah was living with us at the time. Dad used to play guitar for him when he was a kid. My first guitar was his. He loaned it to me. It became a lifelong loan. That was long before I started playing. I was five or six at the time.

SDT: Your bio on your website says your dad had the only electric guitar in the area… a blue guitar?

JDG: My dad did have the only electric guitar around the Panhandle, but it wasn’t blue. I think that was mixed up with my first electric guitar, which was a blue Washburn. Around 1950 my uncle had a Fender Telecaster. My Dad was in love with that guitar. It was when my Dad and I were living on a berry farm in Tulia. My uncle was living with us at the time. When he left, he took my dad’s electric guitar and left the Fender Tele. My Dad’s guitar was a Fender No caster. Fender was originally going to call that guitar a Broadcaster, but Gretch drums already had that name. So, there was this period where Fender put out their guitars with no name on them… They just said, “Fender.” After that the Telecaster came out. My dad had one of what became later known as the “No-caster.” My dad said he bought it in Vernon around 1949 or ’50. Later in his life he researched it and actually ended up communicating with one of the original Fender people from the era. These guitars were built by hand. When he and Dad talked about it they figured out that it was very possible that he may have been the one who built that guitar.

SDT: That’s quite a story.

JDG: There’s more. Flash forward to years later at Kerrville Folk Festival. One night they had a raffle for a guitar at the close of the festival. That year my mom and dad were there. They became regulars to the festival. My uncles and their families came too. Uncle Darrah was there. He bought a ticket for the raffle and handed it to my dad. Well, he won the raffle! There was an announcement from the stage for him to pick up a J-200 Gibson! Then, you know, he gave the guitar to me! So, there was this exchange of guitars that went on for over 50 years between my uncle, my dad, and me.

SDT: You and your mates, Butch and Joe, are unique in being from West Texas but bringing in the influence of Eastern religion and spirituality to your music in a subtle, non-preachy way. How do you go from being a Baptist to a Buddhist from the West Texas Panhandle?

JDG: In my case it’s abhorrent. My parents were not really religious. My dad was a Primitive Baptist and mom was a Methodist, but both had rejected the church. I didn’t go to any church during my childhood. But, of course, being where we were, I was surrounded by it.

SDT: How did you find your way to eastern philosophy?

JDG: The main thing for me is that I was always a reader. I read everything I could find so I was exposed to so many different ideas. I studied philosophy which led to the Orient.

SDT: Which books or writers influenced you?

JDG: Alan Watts and the Beats were influences. Once I played a benefit for Tibet House that was organized by Robert Thurman. Alan Ginsburg was there as well. We became friends. He really loved the song, “My Mind’s Got a Mind of Its Own” by Butch [Hancock]. The other Beat poet who is an influence is Gary Snyder. His poetry really influenced me. I think we still feel the influence of all of the Beats. They really shifted our culture in a good way.

SDT: Is there any one book that you can point to?

JDG: I’d have to say The Razor’s Edge by Somerset Maugham because I read it when I was young and it pointed me to the direction of eastern spirituality.

SDT: So, what led to playing San Diego at the AMSD series?

JDG: It was kind of spur of the moment. I’m doing the train tour that begins in L.A. I’m playing a gig with Tom Russell, Ramblin’ Jack Elliot, and some others at McCabe’s before the tour begins. I looked over the list of people who had played the series and I was impressed with the quantity and quality of people who had played there. So, I thought it would be good. Funny thing is that my first paying job was in 1965 in San Diego at the Heritage (a popular coffeehouse in Mission Beach during the late 1960s and 1970s).

SDT: Well, thank you Jimmie for your time. I look forward to seeing you.

Gram Parsons: The Man and the Mystique