September 2022
Vol. 21, No. 12
Jean Ritchie: Damsel with a Dulcimer by Ross AltmanJune, 2011
Examining Bob Dylan’s Love Sick Blues by Ted BurkeJune, 2011
John Densmore: An Invitation to Dance on Fire by Terry RolandJune, 2011
A Father’s Day Story: The Courtship of Harry Nilsson’s Son, Zak by Terry Paul RolandJune, 2011
Jazz 88 Keeps Pumping Out the Tunes: Station persists despite numerous challenges over the years, including Coronavirus by Michael J. Williams and Jim TrageserJune, 2011
Me and Ronnie Earl by Eric LiebermanJune, 2011
Lawrence Ferlinghetti: America’s Poet by Ted BurkeJune, 2011
Q & A with Gabe Lapano: After the Rain and Beyond by Andy RasmussenJune, 2011
Remembering Sam Hinton by Paul HomiczJune, 2011
Band of Brothers: The Liggins Brothers by Bart MendozaJune, 2011
Advertisements 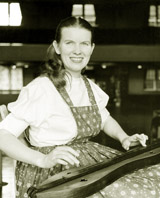 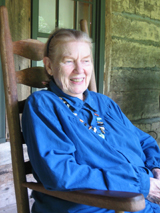 Her Kentucky mountain ballad voice stilled by a major stroke last December, Jean Ritchie is no longer able to communicate. But her inestimable recorded legacy of traditional and original songs will continue to sing and speak for her for as long as time will allow.

When the soundtrack album for the filmÂ O Brother, Where Art Thou? became a hit, the movie’s music producer T. Bone Burnett seized the moment to record a follow-up studio album with the same musicians. It was titledÂ Down from the Mountain and became a hit as well. But despite Ralph Stanley’s welcome presence I kept looking at its roster of contemporary musical talent, and despite their earnest efforts to sound traditional, I kept asking myself the same question: Where is Jean Ritchie?

She didn’t have to make an effort to sound traditional; she was to the cabin born, in 1922, in Viper, Kentucky, and had just turned 87 when she suffered the stroke. She was hospitalized in St. Francis Hospital near her home in Port Washington, New York, where she had moved in 1946 to pursue a living in music.

Not to put too fine a point on it, Jean Ritchie was first down the mountain. The youngest of 14 children, she became the standard bearer of her entire family’s amazing repertoire of Appalachian ballads, many inherited from England in just the way that Cecil Sharp described, an ideal living embodiment of a folklorist’s dream-songs passed on through oral tradition and aural memory.

She learned to play the mountain dulcimer by imitating her father, who forbade her and everyone else in the family from playing it. She was allowed to sing, however, and by the age of five was already able to sing songs she had picked up from her mother. It was at that tender age that her rebellious streak first manifested itself; she disobeyed her father’s orders and started accompanying herself on the lap dulcimer, first singing ‘Go Tell Aunt Rhody.’

When she moved to New York she met her future husband, photographer George Pickow, and he recognized the full significance of what she was doing, the only folk singer in New York’s then-burgeoning folk renaissance to play the dulcimer. They set up shop beneath a bridge and started their own workshop, handcrafting dulcimers for the growing numbers of her fans who wished to learn to play for themselves. They sold over 300 dulcimers in their first year of operation, and a dulcimer revival was born.

In 1952 Jean recorded her first album for Elektra Records, quickly followed by two others, which laid the groundwork for her rock solid folk music heritage. To take but one example of what makes her traditional song-bag both definitive and revelatory, consider the classic lyric ballad, ‘Black Is the Color.’

You may have heard the popular version of the song, as performed by Joan Baez on her second album in 1963. It is credited to John Jacob Niles, the great ballad singer and dulcimer player who, like Jean Ritchie, came from Kentucky. It starts with the haunting and distinctive repetition that ascends up the scale, ‘Black, black, black is the color of my true love’s hair.’ Did John Jacob Niles write this song, as Joan Baez songbook indicates?

Well, yes and no.

If you spend some time researching this you will discover the original sheet music for his version, published by Schirmer’s Music around 1912-1915. Niles’ name is on it, all right, but he is credited as the arranger, for a piano accompaniment and melody, not the author of the song.

Then if you go to Niles’ web site you will discover his own notes to the song, as well as his own recordings of it. He didn’t like the traditional melody, he said, perhaps influenced by his own father, from whom he learned it. It needed something, more grandeur, to fit Niles’ quite dramatic way of singing and presenting these songs. His original melody provides exactly that, and Joan Baez’s version is evidence enough that a great soprano could do justice to the way he had re-imagined the song.

But what about the traditional version, the one that you will find in Alan Lomax’sÂ Folk Songs of the United States? To hear that version you will need to go back to the source, and that would be Jean Ritchie’s recording,Â Songs of the Kentucky Mountains. While her version lacks the grandeur of John Jacob Niles and Joan Baez, it more than makes up for it in her simple honesty of telling the story.

That simple honesty is the hallmark of Jean Ritchie’s singing and performing style, through more than 50 years of recording and live concerts. One of the most charming stories I have heard from her demonstrates this core quality to perfection. Twenty-five years ago Elaine and Clark Weissman’s California Traditional Music Society presented Jean Ritchie with a lifetime achievement award, presented at what was then called simply the Summer Solstice Dulcimer Festival. It was their first lifetime achievement award, and they wanted to acknowledge Jean’s pioneering role in creating an audience for this instrument across the country, even to the point of naming their festival after it.

During her concert performance at the festival Jean Ritchie told the story of the time she asked guitar virtuoso Doc Watson to accompany her at the Newport Folk Festival, hoping to impress the audience with some fancy picking that went beyond what she could do by herself. Doc took on the assignment all right, but then proceeded to vastly disappoint Jean by toning down his guitar playing so that it fit her style, rather than displaying what he could do on top of it.

When Jean Ritchie complained to Doc about not having taken any breaks, or indulged in any fancy guitar work, Doc replied, ‘But Jean, I did just what the song called for.’ In that one brief anecdote, told at her own expense, Jean Ritchie taught me what guitar accompaniment is all about, and why her style of performance has endured through so many changes of musical fashion, and even folk music instrumental mastery.

In her work, whether a traditional song like ‘Black Is the Color,’ or one of her own great protest songs about strip mining like ‘Black Waters’ or ‘The L. and N. Don’t Stop Here Anymore,’ the song is always front and center. Her role as a great folk artist is to serve the song, both vocally and instrumentally, not to impress the audience.

But in so doing, Jean Ritchie has continued to set the standard for traditional music performance, and to carry on her mountain legacy of songs inherited from the Ritchie Family and collected at home and abroad for over half a century.

Because of Jean Ritchie there are now dulcimer festivals all over the country, and the Summer Solstice Festival of Traditional Music, Dance and Storytelling, inspired by one Kentucky ballad singer’s childhood disobedience to her overbearing father, continues to flourish.

Kubla Khan, Coleridge’s unfinished masterpiece about a lost paradise, ends on this unforgettable image: In a vision once I saw a damsel with a dulcimer…

I too saw a damsel with a dulcimer, and happily I wasn’t dreaming. It was Jean Ritchie.

REPRINTED FROM FOLKWORKS WITH PERMISSION (www.folkworks.org)
Ross Altman has a Ph.D. in English. Before becoming a full-time folk singer he taught college English and Speech. He now sings around California for libraries, unions, schools, political groups and folk festivals. You can reach him atGreygoosemusic@aol.com

Dave Humphries & Jim Hinton: Dialogue from Across the Pond