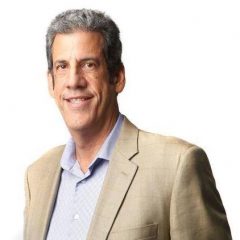 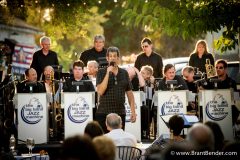 Liss and his big band have been making music since 1979. And ever since its inception, the Ira B. Liss Big Band Jazz Machine has kept big band music thriving in Southern California and has been recognized by established publications such as Jazz Journal and Jazz Weekly for great arrangements, lively performances, and stellar jazz soloists.

For Liss there is no cutting corners. He makes big band music the way God intended, with a full 18-piece ensemble. Nowadays, most times when folks see an ensemble billed as a big band, they will find 14 or 15 musicians on the bandstand, sometimes as few as 11 or 12. “I always have a full 18 pieces,” says Liss. “Fewer musicians in a band is a disservice to the art form. When it comes to this music, I’m a purist.”

If you attend a performance of the Ira B. Liss Big Band, you’re not going to hear the warhorses of big bands heyday. You won’t hear “String of Pearls” or “In the Mood.” Liss believes in keeping the music of big band alive and current. “There is nothing wrong with the traditional big band. But you can’t just stay in the ’30s and ’40s,” he says. “We want to move the medium forward.” Now, don’t get scared off. The Jazz Machine does not venture into the avant-garde territory of the Art Ensemble of Chicago or the omniverse of Sun Ra. What you will hear are well-executed colorful harmonies and intricate rhythms.

This desire to keep things current and keep things interesting comes from the bandleader himself. Liss says, “I’ve played big band my whole life, and more and more I wanted to play things that were more challenging, and I wanted to play in bands that challenged me.” Liss has worked with modern arrangers such as Mike Crotty, who arranged for Airmen of Note, the premier big band of the United States Air Force.

Over the years, Liss has amassed a collection of over 20,000 big band arrangements. Laid end to end, the sheet music of the collection would stretch from San Diego to well past Yuma, Arizona. If performed, one after another, 24/7, the concert would last eight weeks. “I’m told that it’s a larger collection than what music departments in universities have,” Liss says.
The band performs at a variety of venues, such as dances and concerts. They have performed annually at the Bernardo Winery. The ensemble has five CDs to their credit, including the most recent release, Tasty Tunes (reviewed in last month’s Troubadour).

Before we go much further, let’s have a word about big bands. Big bands date back to the 1930s. Folks enjoyed the swing music that had been developing over the previous decade or so. They also wanted to dance. This was decades before the Woodstock Generation, with their Paul Bunyan sized PA systems and tinnitus inducing Marshall amplifiers. So the easiest way to fill a dance hall with music at that time was to hire more musicians to make more sound. The result was the big band.

Besides giving the Greatest Generation a good backbeat to lindy hop to, the increased size of the bands gave bandleaders and arrangers the opportunity to expand on the jazz harmonies and themes of the swing era. These became the hallmarks of Duke Ellington, Fletcher Henderson, Chick Webb, Jimmy and Tommy Dorsey, Glenn Miller and Benny Goodman. If you want a good example of some of the wonderful creativity of big band at this time, try a YouTube of the Duke Ellington band playing “Mood Indigo.” As you listen, remember, this was the 1930s.

By the late 1940s, bebop elbowed big band out of the spotlight for jazz lovers. People danced to rock ‘n’ roll. And the economics favored the smaller ensembles.

Okay, big band had passed its heyday, but it lived on. Stan Kenton kept invigorating the art form with his experiments in coloration and rhythm. And baby boomers, whether they knew it or not, enjoyed big band music when they watched The Tonight Show. While Johnny Carson hosted the show, music was provided by a 17-piece big band. Stray Cat guitarist Brian Setzer still performs and records with a big band.

When Ira Liss was in third grade, he took up the saxophone, an alto. Henceforward, music dominated his life. The native San Diegan was the drum major while he attended Patrick Henry High School, all six feet eight inches of him. Liss laughs as he recalls marching in front of his high school band. “You’ve got this kid who’s 6′ 8″, and then you stick this hat on top of him that’s three feet tall!”

High school marked a turning point for Liss. “In high school I was lucky to have had two wonderful instructors, David Amos and Arne Christiansen. Both men were strong and inspiring, and knowledgeable. They set a great example for a lot of young men. I’m still friends with both of them. And I was turned on to big band my sophomore year of high school. That’s when I heard Don Ellis and what he was doing with his band.” Don Ellis was a pioneering jazz trumpeter and bandleader known for his penchant for experimentation. Back in the late sixties and early seventies the big band leader was so hip that he was invited to perform at the haven of the Jefferson Airplane and Grateful Dead: the Fillmore.

Don Ellis led Liss to explore Stan Kenton, the man who, in the fifties, coined the term “progressive jazz.” Learning about Kenton led Liss to Maynard Ferguson. The stratospheric trumpeter and Kenton alum fronted a band in the seventies that was unafraid to incorporate rock rhythms, perform arrangements of current performers, such as Elton John, and even bring in an electric guitar with (gasp!) Jimi Hendrix-esque distortion.

In the summer of his sophomore year of college Liss attended the Stan Kenton Clinic in Sacramento “It changed my life,” he says. “While I was there, Stan Kenton told me, ‘Ira, it’s going to take guys like you to keep this all going when I’m long gone.’” Liss started San Diego State as a music major and studied with Charles D. Yates, but switched his major to cultural geography with the idea of becoming a teacher. After graduation he worked in real estate, but music remained the passion of his life.

As a jazz performer and educator, Liss realizes that he often has an uphill battle ahead of him. “Unfortunately, today, jazz is less than one percent of what people listen to. I think it’s the same figure for classical music, too. In the United States, I’d like to see things better received. Our music is better received overseas. We have more sales of our CDs overseas. The music is more respected there.”

The Ira B. Liss Big Band Jazz Machine has evolved over the years. It started out as a student band. There weren’t any jazz ensembles in the high schools around Escondido at the time, and Liss decided that he’d help fill the gap by doing a youth band project. “I had a good rapport with the band directors in the area at the time. We wound up doing a lot of our work with the kids during the summer,” he says.

Pretty soon older people who had saxophones and trumpets hanging around in their closets voiced their desire to join in the fun. “Then there were musicians who said that they were wanting to do more professional things. By 1985 we’d moved into being a more professional band.” 1995 marked the year of the big band’s first recording. The recording featured Tom Blair, yes that Tom Blair, the columnist of the Union Tribune and editor of San Diego Magazine, on vocals. “This is not L.A., not New York City, Nashville, San Francisco, the traditional places that have drawn musical talent, not a major center. For years San Diego was looked down upon as a poor stepchild of Los Angeles. It was said for years, ‘Don’t go to San Diego for music.’ But more and more San Diego has been attracting a lot of great musicians. There is a good talent pool here now.”

There are eight full-time music educators in Liss’ big band, and education is a key element of the band and the work that it does. “We think of it as paying it forward. There were so many good educators who helped us all as we were growing and learning,” Liss says.

Liss says that being at the helm of a big band has taught him a lot about working with people. He goes on to say that to make a really great big band, it takes more than just assembling good musicians and great soloists. “Everybody has to be dedicated. It’s fine if somebody is a great soloist, but not if they aren’t a team player. We can’t have any head trippers in the band. I’ve always said that it takes a village to do this. Every player is important.”

Liss is currently working on mixing a CD of live performances culled from eight years of performances at the Bernardo Winery. The compilation includes a number of guest artists. There is no set release date, but Liss promises that it will be sometime soon. “I will be recording for as long as I can,” he says. “We have to keep our fans happy!”

A Passing Phaze with Scott Samuels: The Story of the Teen Rockers’ 1976 Single