January 2023
Vol. 22, No. 4
The Center for World Music Presents Songs and Stories: Refugee Artists in San Diego by J.T. MoringOctober 2018
Back with a Bang! Java Joe's Reunion at San Diego Folk Heritage by J.T. MoringOctober 2018
Book Review: The Philosophy of Modern Song by Bob Dylan by Ted BurkeOctober 2018
Rick Nash: Bass Man in Demand by Wayne RikerOctober 2018
Mod Revivalists the Trebels to Reunite for 40th Anniversary Show by Jim TrageserOctober 2018
If Music Be the Food of Love, Play On: Dually Noted Pairs Fine Food and Fine Music by Paul HomiczOctober 2018
Harold in the Land of Jazz by Bart MendozaOctober 2018
Sephardic Dance and Music by Yale StromOctober 2018
Loretta Lynn: A Special Tribute to the Queen of Honky Tonk by Terry Paul RolandOctober 2018
Ben Grace Gilmore: It's All About Building Community by Sandé LollisOctober 2018
Advertisements 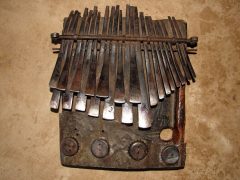 Example of an mbira 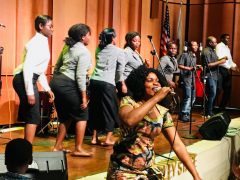 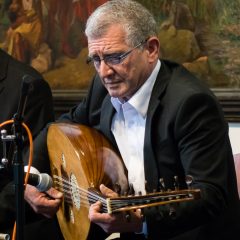 The roots of American folk music stretch deep and wide, and indisputably tap into a myriad of worldwide cultures: bluegrass’ roots in Irish dance tunes, gospel’s in African call-and-response, TejaÃ±o’s in German polkas, and on and on. The Center for World Music (CenterForWorldMusic.org, CWM) promotes performing arts from around the world, expanding intercultural awareness and offering insights into our home-grown musical traditions.

The newest initiative at CWM is their Songs and Stories: Refugee Artists in San Diego concert series, whose inaugural season kicked off last June. Each of the three themed shows included multiple performers followed by a discussion. The first show highlighted African performers; the second featured Middle Eastern stringed instruments; the third focused on songs, stories, and drumming from Middle Eastern women.

These shows gave the performers an opportunity to recreate and reconnect with the culture of the homelands they left behind. They offered local audiences a unique chance to experience unfamiliar music, created organically on the spot by regular folks. The interpersonal bonds forged through those shows have helped weave the immigrant community into the fabric of San Diego life.

Monica Emery (CWM Executive Director) and James Gutierrez (CWM board member and UCSD Ph.D. candidate) are the driving force behind this series. Monica became CWM director four years ago and was able to “connect with San Diego in a way I never had been able to before. Music is such an emotional thing.” Her multicultural upbringing, childhood musical training, advanced degree in international education, passion for traditional Philippine dance, and irrepressible energy positioned her perfectly for this role. From CWM President Tim Rice’s initial suggestion to further “engage with our community” to the series’ first show was a year and a half.

To achieve these unique events, the Center established contacts in the refugee community via the San Diego Refugee Forum and the International Rescue Committee and teamed with the San Diego City Library for performance venues. California Humanities, City of San Diego Commission for the Arts and Culture, and the Peacemakers Fund contributed funding to the project.
The refugee concert series is only one of several programs the Center for World Music has developed in its 55 years. Perhaps most visible is their ongoing concert series, presenting local and national artists. The 2018 concerts included mariachi, mbira (thumb piano), Zulu, Irani, Finnish, raga, and Irish shows. Stacey Barnett (SDSU graduate and Eastern European vocal music phenomenon) is the CWM community engagement coordinator, organizing similar performances at local senior homes and other venues.

Jonathan Parker (noted local bagpiper and fiddler) leads the CWM schools program, which provides hands-on weekly classes from master musicians from around the world. CWM reached over 6,000 San Diego students in the past year, with artist residencies and assemblies at 15 schools, and 17 artists from around the globe teaching hands-on traditional instrumental music, singing, and dance from Brazil, Indonesia, South Africa, India, Iran, Mexico, Ireland, Kentucky, Zimbabwe, and the Caribbean.
The momentum generated by the refugee artist series did not fade with the summer. Two of the featured African bands are putting on a joint show (see sidebar). The Blindspot Collective produced a show Qulili in September examining the refugee experience and featuring the music of Fouad Sawa (see sidebar). Monica Emery is already sorting out ideas for the following 2019 series and looking at possible synergy with other groups such as the San Diego Symphony and San Diego Folk Heritage. Whatever those next steps may be, it’s a sure bet they will meet the Center for World Music’s objective of “giving voice to those not often heard,” and in doing so enrich our appreciation of other cultures and the musical bonds we share.

Matrida David (Ngyuku Taledshiwe in her native Congo) heads the Matrida Umojo Band, which was featured in the CWM concert Voices of Hope from Africa at the San Diego Central Library. She tells us, “The word Umoja is a Swahili word that means unity in English. The band is comprised of people from different parts of Africa; that is the reason we wanted to use the word unity because it unites all of us from different backgrounds together to share one thing in common (spreading the gospel). I sing religious music… Performing at the Center for World Music was one of the most breathtaking experiences I have ever had since I put my feet in the U.S.”

At 17, Matrida made the most of her time at the Nyarugusu Refugee Camp in Tanzania, leading a 100-voice choir. After moving to the U.S. in 2016, she not only continues that work with her local band, but also collaborates via internet with her family and friends who are still in Tanzania.
Matrida still finds it hard to write lyrics in English and to communicate one-on-one with people she meets in this country. Fortunately, her music expresses her joy and passion without the need for a translator. See her with the Revelation Band, also featured in the CWM concert series, this month.
(Thanks for Swahili translations by Emmanuel Adamson Ngelelo.)

Fundraiser for Congolese refugees in San Diego and in the Nyarugusu Camp in Tanzania. www.matridaumoja.com

Fouad Sawa, a professional oud player from Iraq, via Jordan, performed at a concert called Musicians of the Middle East at the Logan Heights Branch Library. He notes that traditional Arabic music “doesn’t exist” in San Diego and the CWM concert was “the best so far” he’s experienced here since arriving in 2009. Fouad relates that Arabic music is based on quartertones, notes that fall between the 12 notes of the Western scale. The result is 150 “branch” scales that must be mastered by an accomplished musician.
Fouad runs Music House, teaching western as well as authentic Arabic music, at 528 E Main St, Suite C, in
El Cajon (619-655-2542).
(Thanks for Arabic translations by Mohammad Alhasan.)

Checking in with Navajo Live