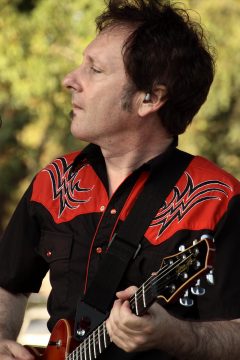 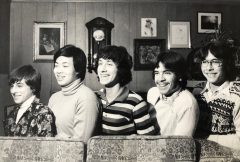 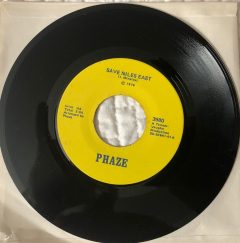 Circa 2018, Scott Samuels is a mainstay of San Diego’s music community, with combos such as Vinyl Pirates, Roxy Monoxide and Solitary Diamonds to his credit. But his entry into music came decades earlier, in his hometown of Skokie, Illinois. In 1976 Samuels and his teen rock ‘n’ roll band Phaze released what would be their only single: “Save Niles East”/“It’s Only Me.” It’s a story that unfolds not unlike a John Hughes-type, 1980’s teen movie, complete with a great soundtrack.

“I’m originally from the northern suburbs of Chicago. I grew up in Skokie, and went to high school at Niles East,” Samuels said. Making the teen movie comparison even more fitting, the school was seen in several major motion pictures, including Risky Business, and several John Hughes films, including Sixteen Candles and Weird Science. “There was a decision made to close the school in 1980 and so it was used as a film set for quite a bit of time after that.” The announcement that the school would close was made with several years notice, so it was that in 1976, Samuel’s senior year, his group, Phaze, came up with a plan they thought might help preserve their alma mater and, at the same time, get their music out on a single. “The band I had in high school, Phaze, hatched a plot to write a song, ‘Save Niles East,’ about saving the school,” Samuels explained. The band of course had more than altruistic motives. “We thought if we could write a song about the school closing, we could get the Student Council to pay for the records, and put the song we really wanted to record on the flip side. Then we would have a 45 RPM recording of the song to sell to students.”

Samuels notes things moved quickly. “I can’t recall much about rehearsing ‘Save Niles East,’ he said. “It seems to me we came up with the lyrics at lunch in the cafeteria and once set to music, we brought it to the student council.”

Phaze consisted of Samuels on vocals and guitar, alongside his cousin, Chuck Heftman on drums; Jerry Minetos on guitar/vocals; Ed Yep on bass; and Carl Taibl on keys. “The band lasted from 1972 to 1976, when I went away to college,” Samuels commented. As for the band’s name? “Phaze was just one of those goofy non-descript band names that a bunch of high school kids would come up with,” Samuels said. “We were never the ‘cool band’ at school,” he continued. “There were two other rock bands at our school, Apocalypse, who were the hot shot classic rock guys, older students,” and Nobody, guys who always seemed to have better equipment, played a lot of cool stuff [Bowie, T Rex, etc.], but were very aloof. I made friends with their bass player when we were in a high school musical orchestra together. Today he’s one of the foremost players of the Chapman Stick.”

Armed with a rough home recording of the song “Save Niles East,” written by guitarist Minetos and arranged by the band, Phaze approached the student council, who ultimately agreed to fund the recording and pressing of the song and its B-side, “It’s Only Me.”

“The student council was a pretty easy sell on the idea,” Samuels said. “Our drummer was on the council, and we had a close friend of the band who was also involved, I think he may have been vice-president,” he remarked good naturedly. The choice of B-side song was pragmatic. “We devoted a practice or two to get ready for the recording. We knew that we wanted ‘Its Only Me’ at the time, as it was one of only a very few originals in our catalog,” Samuels said.

“We recorded the single at WNTH Radio Studios, the high school radio station of New Trier West High School, in neighboring Winnetka, Illinois, where [the film] The Breakfast Club [1985] was shot.” The station, which first went on the air on December 10, 1960, is still going strong as of 2018.

As listed on the record’s label, the recordings were done by Tanner-Vaughn Productions. “They were the two New Trier students who recorded it,” said Samuels. “Those were their DJ names, Mike Vaughn and Randy Tanner. Their real names were Mike Englehaupt and Randy Klinenberg. Randy arranged the session.”

Once in the studio, things did not run smoothly. “We had a lot of technical issues recording the tune, and the two girls who volunteered to sing backup vocals, Nancy McAtee and Bonnie Tunick–we christened them the Phazettes–were having to retake their lines many times. They are still slightly off key on the final recording,” Samuel said. Then disaster nearly struck in a way that could only happen to a truly young band. “Both the backing singers and our bass player ran out of time and had to leave, because their parents were picking them up. We wound up recording the second side, ‘It’s Only Me,’ the one we really wanted to get on vinyl, in under an hour, with me playing bass on the cut.”

500 copies of the single were pressed, but there was no picture sleeve. While there is also no label named on the record, the catalog number 3980 “represented the years the school was in existence, 1939-1980,” Samuels said. “We never really thought about a label name, and the place that pressed the records, in an old elevator building on Michigan Avenue in Chicago [the kind were a guy in a funny cap sits in the elevator, opens the old-fashioned criss-cross gated door, and then operates the elevator] completely did the label “graphics.” We just specified that they be in the school’s gold and blue color.” Despite or perhaps because of its primitive recording creation the resulting record is 3:05 minutes of fun sixties-influenced pop rock, complete with Farfisa organ, touches of early Beach Boys in the vocal arrangements and the Animals in the closing. Those backing vocals? Definitely part of the song’s charm.

Despite high hopes and some local press coverage not much came of the single. “We got some press from the local papers (“students record song to try to save Niles East”) and an appointment with a DJ at WLS radio in Chicago, who was interested in the record, but no airplay.”

Its premiere at Niles East High School for the students was also less than auspicious. According to Samuels “reaction in the high school was really bad.” The single was played over the schools public address system. “They had this horrible PA system with speakers in every room and played it during homeroom through the school PA, which couldn’t handle the bass frequencies in the recording.” He notes the song was not exactly a major studio production. “[Keep in mind that] the guys who recorded it were DJs. They knew very little about EQ for vinyl and this was the mid-1970s, so the concept of mastering, and the tools for mastering, weren’t well-known. It sounded so bad through the school PA that I recall all of us keeping our heads down and not looking around until it was over.” Sales of the record by the student council, who financed the whole thing, were very slow. “Eventually [when they didn’t sell through the school], they gave us the box of singles, and we’d sell them at shows.”
The release of “Save Niles East” was acknowledged at the time however. “It was put into a few of those time capsules that were popular back in the day,” Samuels said. “The one at the school was supposed to have been dug up by now, but I don’t know that it ever was, since the school closed, and the land was repurposed.

With Samuels off to college the band broke up in 1976. “We played a bicentennial celebration on the football field at Niles West, our sister high school,” Samuels recalled. “When I went away to college, I used to take the Greyhound back to Chicago to play a few gigs, but that became too time consuming, so we broke up. When we finished, there were about 60 records left, and we divided them up between us. I still have about seven or eight, and whenever I play a show in Chicago, I’ll do some Niles East trivia and give one away as a prize.”

Though the single didn’t garner much attention at the time, it has since become collectable, with copies selling for $25—$50, depending on the condition. For Samuels it holds a lot of fond memories. “Looking back on the record, I’m pretty proud of it. It’s a definite garage band kind of pop song, and there’s some out-of-tune female vocals at the end. Ultra-corny, but whenever anyone talks about Niles East on Facebook for class reunions and such, someone will inevitably reference the song in a positive way, or ask if anyone has a copy of the song they can post. And then there are the copies that pop up on eBay for $25—$50…that blows my mind.

Phaze nearly released a follow up single. “We used to play a few other originals, and recorded a song called ‘Summer Girl’ as a follow up to ‘Save Niles East,’ but never got past doing a test pressing of it.” As for a typical Phaze set list, according to Samuels, “the cover songs spanned from the ’50s to ’70s. Stones, Beatles, Monkees, some of the usual high school cover band stuff from the era, such as ‘We’re an American Band,’ ‘Smoke on the Water,’ ‘Blue Suede Shoes,’ ‘The Hustle,’ ‘Peaceful Easy Feeling,’ and a bunch of stuff that I liked because of my affinity for British glam, including ‘Fox on the Run,’ ‘Rock ‘n’ Roll Part 2,’ ‘Take Me Back ‘Ome,’ ‘Saturday Night.’ Once we were hired for a ’50s sock hop at a junior high, but no one told us the theme, and I was in the thick of my love affair with British glam rock, so most of our set was the glam stuff…it was pretty funny.”

A Phaze reunion is still possible if not likely. “I still keep in touch with most of the band,” Samuels said. “In fact, my cousin, Chuck Heftman, played drums with me for the first time in over 30 years at the CD release party we had [on May 11 this year for the album Completely Amazing Day at Iron Fist Brewery in Vista a few months ago.” Meanwhile, “Carl, the keyboard player, lives in the Bay Area and is a CPA. Jerry’s a CPA who’s done a lot of work for the Greek Orthodox Church. The one I’ve lost touch with is Ed Yep, the bassist who, last I talked with him, was a policeman in Highland Park, Ilinois.” There was even talk of a Phaze reunion for the 75 year anniversary of Niles East. “But the school district and the alumni association had some kind of disagreement, and the whole thing was replaced by putting a commemorative display in the school district headquarters, with Niles East memorabilia. I’m told there’s a copy of the record in that display.” Despite some new-found acclaim for the single, the song’s underdog status continues for Samuels to this day. “I tried to see it in the display last time I was in Chicago,” Samuels said. “But the offices were closed.”

Lester Bangs’ 70th Birthday Bash: Whatever happened to “Don’t trust anyone over 30?”