October 2022
Vol. 21, No. 13
LOULAPALOOZA! Honoring the Legacy of Lou Curtiss by Yale Strom & Elizabeth SchwartzMay, 2022
Hemisphere: Positively Energized and Ready to Rock by Laura PrebleMay, 2022
Albert Cummings Is Good with his Hands by T.E. MattoxMay, 2022
Book Review: Mandolin Man, the Life of Roland White by John HighkinMay, 2022
Farm Truck: Coming to a Venue Near You by Wayne RikerMay, 2022
Songbirds Take Flight by Charlene PulsonettiMay, 2022
Performers and Artists Contribute to the Audubon Society’s Birdsong Project by Paul HomiczMay, 2022
Finding the Balance Between Science and Music: An Interview with Dr. Hima Joshi by Catherine BarnesMay, 2022
Jazz 88's Joe Kocherhans Bids Farewell to a Long and Illustrious Career by Wayne RikerMay, 2022
Tiki Oasis Celebrates 20 Years of Exotica Mayhem and Fun  by Andy RasmussenMay, 2022
Advertisements 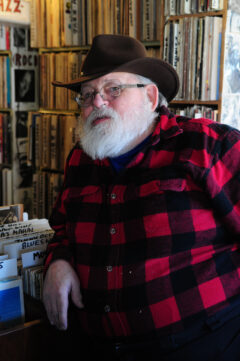 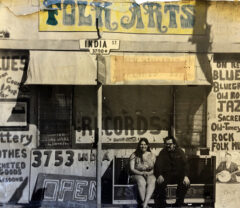 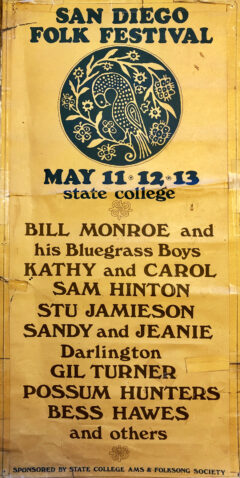 Poster for one of the early Folk Festivals. 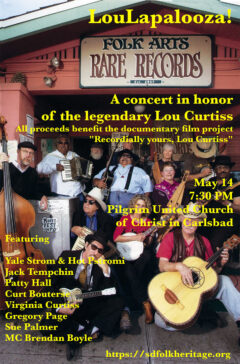 Poster for the May concert. 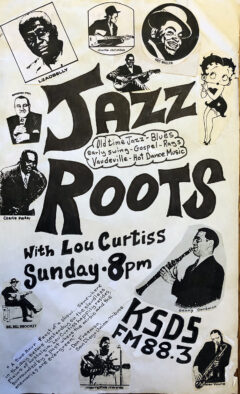 On May 14th, the San Diego Folk Heritage is hosting a benefit concert featuring some of the giants of the San Diego music scene in honor of our own Lou Curtiss. In addition to Yale Strom & Hot Pstromi, the lineup for the evening includes Jack Tempchin, Gregory Page, Sue Palmer, Patty Hall, Curt Bouterse, Virginia Curtiss, Walt Richards… and a few surprises. We’d like to let you know why the late Lou Curtiss is worthy of this event but more, the documentary film, Recordially Yours, Lou Curtiss.
Troubadour readers know Lou Curtiss from his monthly Recordially Yours column, which has been published posthumously since July of 2018, when he passed. But there was so much more to him. Lou Curtiss was the creator of the San Diego Folk Festival and the Adams Avenue Roots Festival, an audiophile, folklorist, author, raconteur, radio host, and proprietor of Folk Arts Rare Records. His shop was a mecca for some of the most celebrated American roots musicians in America, such as Jack Tempchin, Tom Brousseau, A.J. Croce, Mojo Nixon, George Winston, Sue Palmer, Alison Brown, Tomcat Courtney, Tom Waits, Gregory Page, Mike Seeger, Sam Hinton, Sam Chatmon, Rose Maddox, and many others who were profoundly influenced in their careers and lives by Lou.
His influence on the extraordinary musicians who flocked to his shop extends far beyond this corner of the world (today the shop is located at 3610 University Ave. San Diego, CA 92104 under the visionary leadership of Lou’s protege, Brendan Boyle). There were countless others, some of whom came to Lou directly from the airport, who eagerly traveled to San Diego to soak up his knowledge, stories, and advice, and sift through the thousands of vintage and rare vinyl albums they could only find in one place. The knowledge he imparted to these practitioners has been shared all over the world.

What Don Freeman of the San Diego Union-Tribune had to say about Lou’s radio show:

A two-hour fest of a show… somewhere in the day before yesterday on the cloudless plains of nostalgia, Lou Curtiss happily resides, surrounded by a past where the music and the memories are evergreen.

Lou’s story is also the story of the folk music scene in San Diego, beginning in the 1960s. Folk music in America bourgeoned during this period as a cultural outgrowth of the progressive political movement, particularly its coalescing around the Civil Rights movement and opposition to the Vietnam war. As a child, Lou was introduced to both folk music and labor-oriented politics by his father, who was a member of the IWW (International Workers of the World) union and rode the rails during the Great Depression. Lou’s own experiences included registering African-American voters in the deep South and being threatened by the KKK. His social sensibilities, activism, and love of roots music from the South (blues, Cajun, bluegrass, etc.) shaped his lifelong dedication to collecting and disseminating American roots music, mirroring the efforts of Jon Cohen and Alan Lomax.
With like-minded colleagues, Lou shepherded the folk music scene in San Diego in places like the Heritage, (where Tom Waits worked as doorman and was encouraged and fostered by Lou to play and sing), The End, The Alley, Orango’s, Old Time Café, and Drowsy Maggie’s. In 1967, Lou created the San Diego Folk Festival, the progenitor of the Adams Avenue Roots Festival, on the campus of San Diego State. It was the largest folk festival west of the Mississippi until it ended in 1987.
When we began working on a documentary about Lou, titled Recordially Yours, Lou Curtiss, we already knew a lot about him and, needless to say, were fortunate to know him personally. But through our extensive and lengthy interviews—most especially with Lou himself—Strom and Schwartz discovered even more extraordinary details about his life. Lou wasn’t just registering voters during the Civil Rights Movement, he was jailed in 1964 along with dozens of others, including Dr. Martin Luther King, Junior (whose life and work we commemorate on January 17th). Not only did Lou’s father ride the rails during the Great Depression, he taught Lou to do it himself. In fact, he hopped a freight from San Diego up to the El Monte stadium in Los Angeles to catch a Johnny Otis (“Hound Dog”) show.
This portrait of a legend in the folk music world is made with the loving and gracious support of Lou’s family, community, and the internationally renowned artists who carry his indelible lessons with them wherever they go. San Diegans are rightly proud that the epicenter of so much in the music world is here, in the story of the singularly fascinating, brilliant, and idiosyncratic Lou Curtiss.
The San Diego public will be able to see the film this year. The pandemic hasn’t prevented us from transcribing, researching, and editing, and we are in post-production. In addition to interviews and footage of many renowned artists, music and cultural historians, friends and family, the film includes archival film and sound recordings.
Gregory Page made a lovely little film honoring Lou Curtiss. Click here: https://www.gregorypage.com/lou-curtiss-film
We invite you to be part of the final process. Thanks to San Diego Folk Heritage Society, we are performing a fundraiser concert with Yale Strom & Hot Pstromi—with a sneak peek of the film—on Saturday May 14th, 7:30pm, at Pilgrim United Church of Christ, 2020 Chestnut Avenue in Carlsbad. We’ll also have some very special guests with us: Jack Tempchin, Curt Bouterse, Sue Palmer, Patty Hall, Walt Richards, Virginia Curtiss, and other surprise guests. Let’s welcome the New Year by coming together to honor Lou and his legacy for us and the community.  Lou Curtiss Film Benefit | San Diego Folk Heritage (sdfolkheritage.org)
Note: Please check out a rerun of Lou’s Recordially Yours column, where he talks about his friendship with Tom Waits. (https://sandiegotroubadour.com/?p=19610)

Farewell to the Pannikin and Coffee Culture as We Knew It