October 2022
Vol. 21, No. 13
Farewell to the Pannikin and Coffee Culture as We Knew It by John RippoMay, 2022
Hemisphere: Positively Energized and Ready to Rock by Laura PrebleMay, 2022
Albert Cummings Is Good with his Hands by T.E. MattoxMay, 2022
Book Review: Mandolin Man, the Life of Roland White by John HighkinMay, 2022
Farm Truck: Coming to a Venue Near You by Wayne RikerMay, 2022
Songbirds Take Flight by Charlene PulsonettiMay, 2022
Performers and Artists Contribute to the Audubon Society’s Birdsong Project by Paul HomiczMay, 2022
Finding the Balance Between Science and Music: An Interview with Dr. Hima Joshi by Catherine BarnesMay, 2022
Jazz 88's Joe Kocherhans Bids Farewell to a Long and Illustrious Career by Wayne RikerMay, 2022
Tiki Oasis Celebrates 20 Years of Exotica Mayhem and Fun  by Andy RasmussenMay, 2022
Advertisements

Your local coffeehouses need local music—and to be told that, loud and clear, and often!
This was written following the news that the La Jolla Pannikin, a local mainstay of coffee culture, would close permanently at the end of April. While the coffeehouse now seems to have a reprieve, Pannikin’s era echoes decades when art, lit, life, and music rang in coffeehouses—way different from the electronically induced silence in coffee shops now. 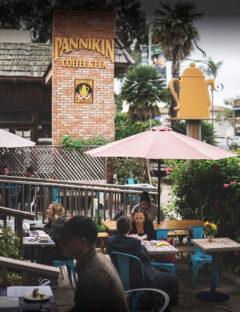 The Pannikin in La Jolla.

PANNIKIN ENDS TOMORROW. After 54 years, one of the flagship coffeehouses of San Diego will be gone. This is more than the closure of another small business, another cafe ending its run. In some ways, the end of the Pannikin is an end of a very long line of how cafe culture expressed and knew itself for centuries in Europe, the Middle East, the Americas, and here.
That’s because the coffeehouse, no matter where, has ever been a focal point for locals seeking company between safe walls, and there building a level of community on a human scale that suited their various needs. Out of those communities, communication, business, political, and other organizations have risen: Lloyd’s of London and the New York Stock Exchange are two that come to mind, and the American, French, Russian, and Velvet Revolutions were birthed in coffeehouses or had their central correspondence organizations housed in them. The number of artists, musicians, writers, and creatives that founded their careers or enhanced their fortunes in them are too many to count, and even the creation of an element that helped fuel the twisting of cafe culture was named after the coffeehouse its originators met in. The coffeehouse has been a seed bed for ideas, acts, politics, and business, a place where thoughts and rhetoric go to have sex. They’ve often been singled out for special condemnation for those habits. That happened throughout San Diego’s history, too, and local publication The ESPRESSO damaged several attempts at that damage inflicted by City, but I’m getting ahead of myself. 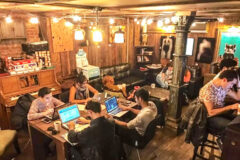 Laptops and cell phones have changed the vibe of today’s coffee culture.

Since the rise of the Internet, the coffeehouse has gone from a face-to-face meeting place of active people to a quiet study hall filled with computerized campers, where once conversation rang into the caffeinated nights,  it has been replaced by work space-like environments sequester lone souls locked onto their screens. The last time I entered the now defunct Young Hickory in North Park, I saw a row of two-seat tables along one wall, where at every other one was inhabited by a young man with either phone or laptop in front of him; every man faced the same way and most wore earphones. The cartoon that suggested itself to me would have carried a single thought bubble over all of them with a caption reading, “Damn, I’m lonely…” and would have been apt. Young Hickory is gone now. The two items are directly related. 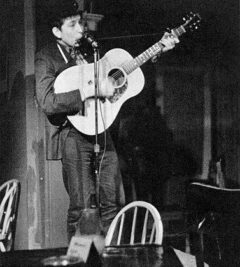 For a coffeehouse—not a coffee shop or coffee stand or coffee bar—to succeed, it has to not only sell plenty of coffee and food but it has to make enough people fall in love with it and make it part of their lives, enough for them to choose the coffeehouse over other likely places where they could be social. Customers adopt a coffeehouse the way pub crawlers favor their local bar, or the way travelers favor a preferred hotel. The place agrees with its public; it resonates and makes them feel comfortable, and this is why the coffeehouse is referred to as the Third Place, after home and work. But the modern, connected (and disconnected) age we live in is simply death to the coffeehouse concept. Connectivity is no substitute for conversation with friends or intriguing strangers across the table; worlds of music and art halfway around the world are different from the band or rising singer not ten feet away on a small stage from your table. Unfortunately, the coffee trade itself has not failed to drive nails into the coffeehouse’s coffin, this in the form of endless praise of corporate coffee, Starbucks the prime example among them.
Chain coffee outlets like The Mighty Mermaid are fine examples of the kind of economic colonialism America excels at. They’re there to sell the product—on their terms—to a public quickly addicted to their language, menu options, and practices at high prices. Except for the coin in the worker’s pockets—and not much of that—the profits flee the locality to the corporate HQ, management, and shareholders. Unlike small businesses that flow their money in the localities they operate in, chain caffeine is a net economic loss to the places in which they operate, and as if that weren’t enough, none of the chains assist the growth of local culture. Don’t place your new magazine, flyer, or poster advertising your band, service, business or organization in a Starbucks, Peet’s, Coffee Bean and Tea Leaf, or the rest of them; they’re not welcome except under suffocating limits, and even then, most are tossed as soon as one’s back is turned. And forget about readings, music, lit gatherings, neighborhood or other meetings there, too. Time limits exist for table occupancy in the chains, and getting 86’d for upsetting corporate policy becomes easier all the time. 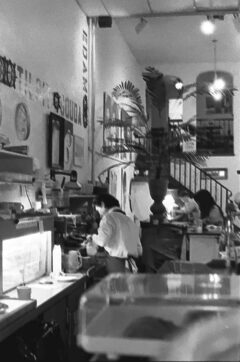 Quel Fromage in Hillcrest was a wonderful hang back in the 1970s and 1980s.

Coffee trade media strangely celebrates chain success and models them to independents as the only way to go if they want to make it in the retail coffee trade. It’s as if that media has no understanding of what made coffeehouses successful forever long before Howard Schulz invented Starbucks. The result has been years of cookie-cutter coffee shops that prize their coffees, yet too often fail to familiarize their clientele with the uniqueness of the product and the house it comes in, and worse, refuse to assist the growth of local culture from the ground up. No music, no art, no nothing. This is a direct pathway to failure, since all too soon, a coffee shop that doesn’t make itself special to enough people is a victim-in-waiting to the next coffee shop or chain location that moves in across the street or at the corner. That’s what happened to Young Hickory. Since Covid, this lack of community has proved fatal to many coffee businesses, especially in East and North County. Though some savvy operators have picked up places for cheap since ’20, and do well, their model depends on more tables rather than tables full all the time. Headaches times two with overhead to match is a risky way to go, but one that the coffee trade media celebrates. Maybe they’re right, maybe the times have changed from face-to-face community to virtual ones, permanently. 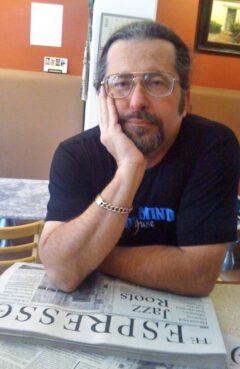 Writer John Rippo, editor and publisher of The ESPRESSO.

I hope that at least a few brave souls out there will take some initiative and boldly go up to intriguing strangers in cafes and say something like, “You look interesting; do you have two or three minutes for a chat?” And maybe see where that goes, often. The older crowd of the coffeehouse kind could tell you many fine stories about where such opening lines have led to in their lives. It’s what the coffeehouse—and community of real people—are made for. Turn off your phone, leave that laptop at home, spruce yourself up, and remember to smile and strive to exercise your wits and grace. You never know—you might find the love of your life, a friend or collaborator, a business partner, or valuable contact that way; it’s been done before. And you might save a noble institution from going the way of lonely, sterile, disconnected anomie; this modern age is taking it. Maybe you’ll even help spark a resurgence of local caffeine culture and listen to more new music from the next Jewel, Jim Morrison, Tom Waits, Blink 182, Mamas and the Papas, and too many others to name, and help make the SDPD, local politicians, and other fat cats worry about what the mere people are up to in the coffeehouses again, like they did in ’60s when they shut down the places near SDSU, La Jolla, Pacific Beach, downtown, and everywhere else because those antiwar hippies were too good at organizing against the flawed status quo.
Good luck. See you in the coffeehouse. Don’t forget to say hello.

Bohemia After Dark: Claudia Russell and the Intimacy of Radio