January 2023
Vol. 22, No. 4
KGB and the Golden Age of Radio by Steve TaigApril 2022
Back with a Bang! Java Joe's Reunion at San Diego Folk Heritage by J.T. MoringApril 2022
Book Review: The Philosophy of Modern Song by Bob Dylan by Ted BurkeApril 2022
Rick Nash: Bass Man in Demand by Wayne RikerApril 2022
If Music Be the Food of Love, Play On: Dually Noted Pairs Fine Food and Fine Music by Paul HomiczApril 2022
Mod Revivalists the Trebels to Reunite for 40th Anniversary Show by Jim TrageserApril 2022
Harold in the Land of Jazz by Bart MendozaApril 2022
Sephardic Dance and Music by Yale StromApril 2022
Loretta Lynn: A Special Tribute to the Queen of Honky Tonk by Terry Paul RolandApril 2022
Ben Grace Gilmore: It's All About Building Community by Sandé LollisApril 2022
Advertisements 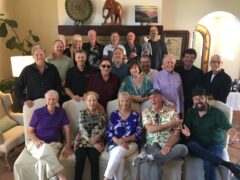 “The death of radio.” You’ve doubtless heard that term at some point or another. They bring it out every time some new-fangled doodad comes along that’s supposed to be so much better, it renders the need for terrestrial airwave information and entertainment transmission obsolete. Every time some corporate media conglomeration rolls into town, buying up things for no other purpose than to feed its insatiable need for consumption. Every time it wields its unfeeling axe toward long standing, hard- working, much-loved employees and personalities to commit firing bloodbaths in the name of the unholy bottom line, the narrative is that this is truly the end. Every time you even attempt to give it a listen and can’t shake the feeling that every time you get just a little bit less programming and just a little bit more advertising and think to yourself, “I’ve got so many more viable options, why would I want to listen to this drivel?” the cold specter of death nods with you in agreeance and urges, compels, points with its emaciated finger the way toward other avenues of distraction such that you become lost in digital mundi, so that it may have finally all to itself the waning flesh of what was once the coolest medium on the planet, now reduced to a withering husk being dragged to untold hells of darkness below.
And yet, after the bells have tolled many times, it is still here with us. It’s different to be sure. It has evolved to be sure. Is it better? Well, the long answer is—it’s complicated. The short answer is—no, it’s not. To know why, one only has to contrast and compare the quality of the programming today with the programming of what is considered to be the heyday of radio, considered by many experts much smarter than I to be the early 1970s up to around 1996, give or take a few years for the sake of argument. So, the question being asked is not necessarily “Why does modern radio programming suck so bad these days?” as it is “What was so great about this supposed Golden Age of Radio?” 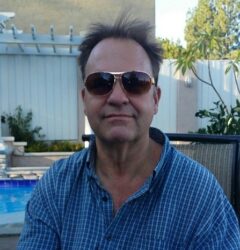 The new documentary, KGB and the FM Radio Revolution, is the answer to this latter question. It is the latest brainchild from film producer Raul Sandelin, charter member of a gang of motley delinquent longhairs who in the 1970s called themselves the East County Rock Kids. Sandelin was privy to a unique moment in time and place—El Cajon—which cultivated a scene that would produce such legends such as Iron Butterfly, Glory, and the great Lester Bangs. It was a furious fusion of influences that could be had from old country and blues to the rock ‘n’ roll of the ’60s, which was giving way to the harder, grittier rock for which KGB would become known. He is now a teacher of English and writing composition at Grossmont College, also a contributor to the San Diego Troubadour and a UCSD alum.
Around the turn of the century, Raul got interested in filmmaking and, after producing some short films and experimental flicks, released his first full-length documentary in 2013—A Box Full of Rocks: The El Cajon Years of Lester Bangs—and also established the Lester Bangs archive at Grossmont College.
While working on A Box Full of Rocks, Sandelin linked up with partner-in-crime Tony Butler, videographer and editor, musician, jack of all trades, also from El Cajon, and a converted real estate salesman, Butler moved over to video editing back in the dinosaur days of VHS. The partnership worked out so well they’ve been together ever since, including the collaboration on KGB. If you’re from waaay back you might remember him as co-owner of Jim’s House of Guitars. 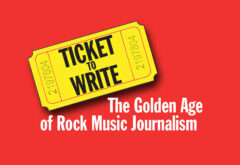 Ticket to Write: The Golden Age of Rock Music Journalism (2016), Sandelin’s second documentary, expands on the world traversed by Bangs and interviews a whole slew of well-known music writers such as Robert Christgau, Ben Fong-Torres, and Richard Meltzer.
Throttle The Sun (2017), his next release, is an examination into the phenomenon of the rock star in its natural environment: a puddle of puke on the bathroom floor of a hotel in Anytown USA, trapped in a world teeming with drugs, sex, and the highest levels of stunts and debauchery that all the money in the world can buy. Those poor, depraved golden gods, what a wretched existence it must be when they only have giant stacks of thousand-dollar bills with which to dry the tears being cried from within their souls.
With KGB and the FM Radio Revolution, Sandelin hits the nostalgia button pretty hard. KGB was the soundtrack to his childhood and probably more important, his coming-of-age years coincide perfectly with the apex of success the station had in this particular era. Most of the songs they still play to this very day they were playing back then as well—of course they were all brand new back then; and KGB was notorious for wacky stunts and promotions like the Homegrown albums and KGB Skyshow; it is also the birthplace of the original KGB Chicken.
He interviews a whole host of alumni DJs, like Jim McIness, Gabriel Wisdom, Burger and Prescott, Cookie “Chainsaw” Randolph, Chris Boyer, Coe Lewis, OB Jetty, and “Shotgun Tom” Kelly, among many others. There are also some clips and stories from former Rolling Stone kid journalist turned successful Hollywood movie director Cameron Crowe, who got his start writing liner notes for the Homegrown albums.

The documentary comes in five episodes, each about 45 minutes long. It glosses over the ancient history and origins of the station in the 1920s, when it was run on a 10-watt transmitter from the Normal Heights residence of W.K Azbill, operating under the call letters KFBC. It became a true commercial station when it was, after being sold numerous times, moved to a new facility on Ash and Seventh in Downtown in 1928. One of the first moves by new station manager “G”eorge “B”owles was to request new call letters with his initials in them. Coupled with a “K,” the government assigned call letter to identify the commercial stations on the West Coast, you get “KGB.” If you were ever wondering how the station got its name, that’s really all there is to it, so all you patriots out there can relax. KGB has as much to do with the Cold War-era Soviet secret service agency as KLSD has to do with the rabid snakes that are crawling around on my ceiling right now. 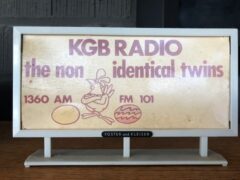 Originally an AM station, it changed hands many times over the early to mid-20th century, with programming consisting mainly of news, talk shows, and theater, what was then known as MOR (middle of the road). Sandelin picks up in the ’60s when it became Boss Radio KGB and started playing rock ‘n’ roll music. In 1972, they switched over to the more experimental FM band and found their home at the 101.5 frequency it has been broadcasting on for 50 years. He checks out with the signing of the Telecommunications Act of 1996, which changed the way the entire industry operates, and many would argue not for the better. More on that later. This ending also coincides with the sale of the station by the Brown family to the rising corporate behemoth Clear Channel.
Topics covered are the life of the FM DJ, the morning shows and news teams, and backstage rock star stories from the folks who dealt with them on the regular. The station is also noted for putting on three of the top 10 radio promotions of all time.
That the documentary, Sandelin and others refer to this Golden Age of Radio in the same manner discussed in Ticket to Write, which speaks to the Golden Age of Music Journalism as happening simultaneously and also in the same years that many argue was the Golden Age of Rock ‘n’ Roll can hardly be coincidental. Speculative? Of course. Open for heated debate among the Knights of the Music Nerd Round Table? Pff. Obviously, noob.
The 101.5 was a product of its time. It was also the result of the work of Boss Radio DJ Ron Jacobs, who in 1972 was brought in by the Brown family (Willet and his son Mike) to retool the station, turning it into what we know it as today. Jacobs combined the best of Boss Radio and the AM slickness with the free-form FM KPRI’s hippie jokes and counterculture humor. Something you can’t even begin to appreciate is the novelty it all. This type of format you take for granted today was brand new in ’72. The record industry was enormous, the Boomers were booming, some of the greatest rock music ever produced was coming out right at this time. The word “freedom” comes up a lot. There wasn’t much in the way of a chain of command that people had to answer to, no focus groups or marketing mooks stepping all up in yer biznak. There were a lot more opportunities to do something daring or play something off the wall just because. When nobody is sure what’s going to work, it’s a great time to try any damn thing that comes along.
FM radio was the wild, wild west, with nobody having a set idea about what to do with it, so it was all experimental. You also had a much wider variety of formats because of the diversity in ownership. Stations weren’t owned by corporations; they were owned by people—sometimes just one person.
All of this was the perfect mix of events that gave the radio business its heralded heyday. KGB and the FM Radio Revolution is a great primer if you’re interested in understanding why this era was the best that terrestrial radio has ever been.
What’s gonna happen to the future of radio? Click here: https://sandiegotroubadour.com/radio-days-yesterday-today-and-tomorrow/
Note: KGB and the FM Radio Revolution will be showing on Thursday, May 5, 5-7pm at the La Paloma Theatre, 471 S. Coast Hwy. 101 Encinitas.