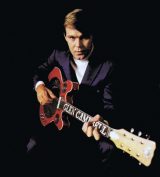 He and the King of Western Swing searched for the “rose of San Antone.” He and Wanda Jackson raised the roof at a television party. As a session man with a group of legendary LA-based musicians, he was on enough gold records to fill several city blocks. Brian Wilson and Frank Sinatra sought his services. Providing the voice to numerous Jimmy Webb songs, this collaboration of a singer and songwriter was only rivaled by the pairing of Dionne Warwick with Burt Bacharach.

If you answered “Glen Campbell,” move to the ahead of the class, and if you only know him as the clean-cut singer of numerous television appearances, there is much more to his story.

Campbell’s life has been one of personal triumphs and demons, perhaps no more so than in the time frame of the last nine years. In November 2003, he was found guilty in Phoenix of driving under the influence and leaving the scene of accident. After achieving sobriety, Campbell released in 2008 an ambitious and critically acclaimed album, Meet Glen Campbell. The title was opened to interpretation: was it a chance to start anew after a difficult time? Or was it Campbell’s way of reaching his audience and saying, “You may think you may know me, but…” Whatever the reason for the title, the music on the album resonated with the critics and introduced Campbell to a younger audience, with song selections ranging from past bohemians (the Velvet Underground) to current ones (Green Day).

The accolades and applause for his comeback — both professionally and personally — left his legion of followers unprepared for the bad news last summer. After speculation, Campbell revealed publicly he was suffering from Alzheimer’s disease. Taking Dylan Thomas’ famous poem to heart, Campbell is not going gently into that good night. He has indicated that the current international tour will be his farewell to performing. What’s more, he has a new album, Ghost on the Canvas, to promote while out on the road. The new CD may be as good — if not better — than its predecessor. Its haunting title track was penned by Ex-Replacements front man Paul Westerberg, and the promotional music video features a canvas that comes to life, showing Campbell with his musical compatriots, many who are now deceased: Elvis, Johnny Cash, Buck Owens, Dean Martin. On another track, “A Better Place,” Campbell addresses his mortality:

Sometimes I’m so confused, Lord/ My past gets in the way/ I need the ones I love, Lord/ More and more each day/One thing I know, the world’s been good to me/A better place awaits, you’ll see.

2012 marks over 60 years in Campbell’s time line as a professional musician. It was a story that began in Depression-Era Arkansas. Campbell was one of 12 children born into a poor sharecropping family that survived on minuscule creature comforts. Music provided a relief from the hard life; from all accounts, this particular Campbell Scottish clan were remarkable country pickers. Two relatives were quick to identify Glen as a child prodigy. Uncle Boo provided Campbell with rudimentary guitar instruction. At 16, Glen went to live with another musical uncle, Dick Bills. Dick Bills and the Sandia Mountain Boys were popular on the ballroom and honkytonk circuit in Albuquerque, and Campbell appeared on his uncle’s radio show. Campbell was a valued commodity: a guitarist blessed with a strong singing voice. As his reputation grew, so did his confidence, and he eventually formed his own group, the Western Wranglers.

The late ’50s showed the transition of the American recording industry moving from the Great White Way in New York City to Los Angeles. There was work for a guitarist of Campbell’s caliber, and by 1958 he had relocated to the West Coast. One of his early crossovers from country to rock and roll came in 1959 when he was asked to join the Champs, who a year earlier scored big on the charts with one of the classics of instrumental rock, “Tequila.” Campbell wasn’t the only famous name to come out of the Champs; other alumni included (Jim) Seals and (Dash) Crofts.

For decades, music fans have been entertained by the stories of destiny, incidents that grow more remarkable over time. Consider Elvis’ appearance in a Lubbock, Texas livestock hall during his rise. In a famous 1955 photograph shot for the event, Presley has the audience worked up into a fury. Out in the crowd–and in the same photo–a tall, thin Texan named Buddy Holly stares mesmerized. Holly would later say, “Without Elvis none of us would have made it.” A lesser known moment of musical destiny was shared by composer Jimmy Webb when he interviewed for the San Diego Troubadour prior to his February 2008 AMSD concert in Normal Heights. Webb, raised in a strict Baptist household in Oklahoma, was given money by his minister father to buy a secular pop recording by Glen Campbell. The year was 1961, and Campbell had modest sales with the ballad, “Turn Around, Look at Me.” (A few years later, the Vogues would cover the song and do quite well). “What drew me to the record,” said Webb, “was the voice.” In the late ’60s, Webb and that voice would bring beauty and sophistication to top 40 radio.

The promotion of Glen Campbell as a teen idol might have only been a marginally successful campaign in 1961, but the offers of studio session work kept pouring in. He was a member of the Wrecking Crew, an exceptionally gifted group of Los Angeles-based musicians responsible for the majority of successful singles and albums coming out of Southern California in the ’60s. Other famous members of the Wrecking Crew included guitarists Barney Kessel (who was profiled in the November 2011 issue of the Troubadour), Tommy Tedesco, Billy Strange, Howard Roberts, and James Burton; keyboardists Leon Russell, Mac “Dr. John” Rebennack, Don Randi, and Larry Knechtel (later in the pop group Bread); saxophonists Steve Douglas, Jim Horn, and Nino Tempo; trumpeter Roy Caton; trombonist Lou Blackburn; bassists Carol Kaye, and Joe Osborn; Ray Pohlman; percussionist Julius Wechter; and conductor/arranger Jack Nitzsche.

On any given day, Campbell could be in the studio backing a fedora-wearing Frank Sinatra; on another, it could be Sinatra’s comic foil, Dean Martin. After years of clocked-in studio time, Campbell probably participated on somewhere between 500 and 600 recordings. One of his most memorable friendships was with Beach Boy Brian Wilson. In 1964, the pressure to tour, write, and produce took its tow on Wilson. He announced to his brothers Dennis and Carl, cousin Mike Love, and friend Al Jardine that he would no longer be part of the touring Beach Boys group. Campbell was selected to replace Wilson, and the head Beach Boy was impressed by Campbell’s musical gifts. He had Campbell record one of his songs (co-written by Russ Titelman) called “Guess I Dumb.” Although the single sold poorly upon its release, it has become a coveted single among Beach Boy collectors, a prime example of Wilson’s ambitious artistic vison once he was no longer confined to concert dates. Campbell also participated in the Beach Boys’ greatest album, Pet Sounds, and the single that followed, “Good Vibrations.” West Coast psychedelic pop was now in full bloom. Campbell was the uncredited lead vocal on a dream-inducing single called “My World Fell Down,” the creation of a group called Sagittarius. The masterminds behind the group (which only existed in the studio) were Brian Wilson collaborator Gary Usher and famed producer (The Association) Curt Boettcher.

It seemed Campbell was never far away from a recording studio or a television camera during the ’60s. That’s Glen playing guitar while rockabilly legend Wanda Jackson belts out her trademark banshee wails on “Let’s Have a Party” during a TV appearance on the program, Star Route. Campbell also sang lead on “San Antonio Rose” along side western swing icon Bob Wills on a 1963 Star Route show. Shindig, the popular TV rock show on ABC (1964-66) featured Campbell on a couple of segments, still making his pitch to the teenage crowd.

In 1967, Campbell recorded a song that personified the sweeping changes in country music. John Hartford’s “Gentle on my Mind” is a “ramblin’” song, belonging more to the school of Woody Guthrie and a young Bob Dylan than Porter Wagoner. Along with the Byrds cutting their hair and performing at the Grand Old Opry and Johnny Cash wowing a “captive” audience at San Quentin, “Gentle on my Mind” shook up the predictable format of Nashville’s Music Row. Campbell followed his chart-topper with a sizable hit “I Wanna Live,” and lip-synched the single when he traveled South in 1968 to appear on a San Diego broadcasting pioneer’s variety program, The Bob Dale Show. Dale’s show featured a studio audience and was shot at KFMB-TV’s old studio at Fifth and Ash in downtown.

By the late ’60s, Jimmy Webb, the former 14-year-old Oklahoman, was firmly entrenched in Los Angeles’ songwriting community. He later told the AMSD concert audience during a 2008 concert that he learned more from Campbell “about the music industry than anyone else. I’ll never forget the quotation he told me — he said, ‘Success is when preparation meets opportunity.’ Glen was right, and I always come to the studio prepared.” Webb and Campbell are best known for a remarkable pop music trilogy: “By the Time I Get to Phoenix,” “Wichita Lineman,” and “Galveston.” Phoenix is a classic breakup song; “Wichita” features the tap-tap-tap of a wire code; and “Galveston” — to the surprise of many of its fans — is really about Vietnam; I will clean my gun/And dream of Galveston. While Webb’s songs would be recorded by Sinatra, Richard Harris, Art Garfunkel, and Judy Collins, Webb and Campbell would reunite over the years. The appropriately named album Glen Campbell Reunion: The Songs of Jimmy Webb (1974) earned enthusiastic reviews but only found marginal interest during a year when glam rock was peaking and disco was around the corner.

“Rhinestone Cowboy,” Campbell’s all-time best-selling single, has become such a large part of popular culture that to debate its strengths or weaknesses at this juncture seems a moot point. Baby boomers are more likely to remember Johnny Carson’s hilarious parody of the song on The Tonight Show than the video Campbell made for the tune. The prolific New Orleans songwriter Allen Toussaint (“Java,” “Mother-in-Law,” “Working in a Coal Mine”), gave Campbell his follow-up-to-”Rhinestone” hit, “Southern Nights.”

Campbell’s record sales allowed him the opportunity to appear on the big screen. He held his own in the original True Grit (1969) along side John Wayne and appeared with his True Grit co-star Kim Darby in Norwood (1970). But it was unquestionably television where his talents were best utilized. He was the summer replacement host for Tom and Dick Smothers on the Smothers BrothersÂ  Summer Comedy Hour (1968), which later became a full-fledged variety show called the Glen Campbell Goodtime Hour. The series’ main focus wasn’t on the topical political humor of the Smothers but on music. Now available on DVD, this series — like The Johnny Cash Show, brought the top country, folk, and rock acts into living rooms each week.

The highlight of the recent CMA Music Awards was the tribute to Glen Campbell. When the lights came up, Webb and Campbell walked on stage. If Campbell’s show in San Diego this month contains the same emotional outpouring of affection from the audience, the evening will be a memorable one.

Gram Parsons: The Man and the Mystique

Gary Puckett: From the Quad Room to Stardom