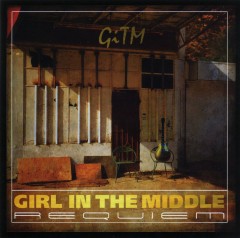 Girl in the Middle has released a debut CD, Requiem, and the alternative-rock disc shows a band that seems to be in a state of flux. The 8-track disc features core members Carol Rider, who plays lead guitar, sings, writes the melodies and shares in the lyric writing with drummer Gregg Henning, and Dany Musser, who adds bass and vocals. For this project, Dave Guevara also contributed guitar and vocals — while the gigging band now includes Tim Edwards (Taylor Harvey Band). Throw into the mix five guest vocals by three singers on the new album, and the focus shifts somewhat from individual performances to the songs, and these are fine.

The disc opens with a power-rocker that is full of hooks called “Witness.” Rider’s searing vocal makes one wonder why the band chose to feature two other female guest singers, and the grinding guitars are spot-on; it’s a radio-ready sounding standout track. The title tune follows, and Sarah Harmel (who fronts the local rockers Runhoney) does a fine job on it, singing “I have a thing for wounded birds/ I have this thing inside,” expressing doubts about a new relationship having the potential for disaster. The arrangement is strong, with driving harmonies on the choruses.

Orange County alt-country songstress Dayna Lane takes the mic for “Back in Love” and gives the song an injection of country sass as she trades lines with Rider, who then adds some raunchy lead guitar licks for good measure. It is another strong cut, and Lane adds another contribution with the restrained “Together.” On “Truth Lies” the band cuts loose, with Harmel out front, using a power-chord hook and a surging chorus to indict an untrue lover, “Why don’t you just tell me what’s really on your mind/ Or is it that I’d walk away and leave you far behind?” The regular line-up is on hand for “Fix It,” a well-arranged mid-tempo rocker with the spotlight on Rider, whose Melissa Etheridge-style vocal matches up well to her dirty blues guitar fade-out.

“U.S.A.” is one track that doesn’t measure up with the other material here. Though well sung by local blues singer/ harp player Lance Diekmann, with plenty of his harp and a brief taste of blues lead from Rider, it is a style mismatch that sounds like someone else’s music, and is the closest thing to filler on an 8-track disc. The original band is able to change pace within the boundaries of its own sound, though, and does well on “Ghost”; a finger-picked ballad that Rider infuses with an emotional connection. She closes out the disc with good imagery about a haunted relationship, “You had the car/ And I had the keys”.

Requiem is interesting music that should both introduce Girl in the Middle to new local audiences and create some buzz about their future endeavors.

MICHAEL J. DWYER: As Real as It Gets