August 2022
Vol. 21, No. 11
Folk Arts Rare Records: Is There a DJ in the House? by Raul SandelinAugust, 2021
The Lady Doctors Will See You Now by Laura PrebleAugust, 2021
Tiki Oasis Celebrates 20 Years of Exotica Mayhem and Fun  by Andy RasmussenAugust, 2021
Happy Birthday, Jeannie! Jeannie Cheatham Celebrates her 95th Birthday this Month by Jim TrageserAugust, 2021
Zach Caplinger: A Gifted Musician in his Own Right by Dwight WordenAugust, 2021
The Return of IPO San Diego: After a Five-Year Local Hiatus, David Bash’s Unique Music Festival Makes a Much-Anticipated Return by Scott SamuelsAugust, 2021
This Saw Is Not a Tool by Derek ShawAugust, 2021
Our Redneck Poet, Merle Haggard by Mark PulliamAugust, 2021
Linda Hoover: I Mean to Shine by Jon KanisAugust, 2021
Tom Griesgraber: Now a Member of the California Guitar Trio by Paul HomiczAugust, 2021
Advertisements

Folk Arts Rare Records is more than a San Diego institution. It’s been part of the heartbeat of the San Diego music scene for more than 50 years. When the late Lou Curtiss opened his shop in 1967, it quickly became a hangout for both the local vinyl collectors and the many, straggly folk musicians, who were coming of age and following Bob Dylan down Highway 61.
Soon the store quickly became a showcase for local performers. Lou and his wife, Virginia, started the San Diego Folk Festival the same year the store opened. And, overnight, San Diego had a real music scene. A sleepy Navy town it was no more! 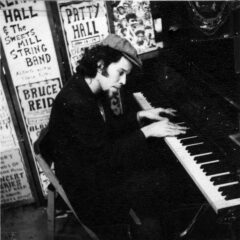 Within a few years, future legends such as Tom Waits and Jack Tempchin would perform regularly at Folk Arts. There’s a well-known bootleg of one Waits/Tempchin show that’s been floating around the San Diego music community for years. In fact, Lou kept a voice message on his answering machine. Lou would press “play” and out jumped Waits’s gravely voice: “Lou, pick up the phone!”
Folk Arts served as Lou’s home base as he pursued other projects. He became a musicologist and archivist for the Smithsonian Institute and Library of Congress. He hosted a radio show for years on City College’s Jazz88, where he would dust off and spin his old 78s and reel-to-reels of original folk, country, blues, and Americana. Folk Arts moved several times under Lou Curtiss’ ownership, the last location being on Adams Avenue in Normal Heights.
When Lou Curtiss passed away in 2018, his obituary in the San Diego Union-Tribune listed Joan Baez, Robert Crumb, RuPaul, A.J. Croce, Horace Silver, Orville Redenbacher, and a host of  others as his former customers. 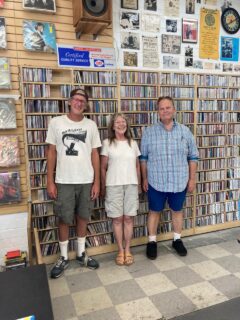 Fortunately, there was someone waiting in the wings to carry on what Lou Curtiss started. Brendan Boyle bought the store in 2014 when Lou realized it was time to retire. However, Lou and Virginia continued to be involved in the various Folk Arts events that Brendan began producing. Lou and Virginia actually performed at some events. And Lou was in charge of selecting the music at Folk Arts’ 50th anniversary party in 2017.
But, running a record store is tough in a world of Amazon and digital downloads. And landlords don’t care if you’re a community “treasure.” So, Brendan had to move a couple of times, first from Adams to El Cajon Blvd, and then to the current location on University Ave. He quickly adds that he is very happy with the landlord where he is now.
Now, less than a mile east of the 805 on University Ave., Brendan is on the outskirts of North Park’s gentrification. The crowd that comes into Folk Arts these days consists of Boomers, who have inhabited record stores for five decades, the Gen Zers, who are discovering vinyl for the first time. The vinyl renaissance that started in the early 2000s is still churning. Perhaps it is the necessary counterpoint to a world increasingly lost in cyberspace.
When Brendan took over Folk Arts, he began hosting a steady flow of live performances, much like Lou had done in the earlier days. Brendan welcomed an eclectic mix of modern and traditional music, including blues, soul, Chicano, and Vietnamese.
Reflecting the fact that “the times they are a-changing,” Brendan has built a DJ booth and encourages guest DJ signups throughout the day and evening when ordinary people off the street can get up—open mic style—and spin records for an hour or two. Never DJ’d before? No problem! Brendan and his staff are on hand to show you how to operate the dual turntables so that you have one record waiting for the needle to drop right as the current song is fading out. 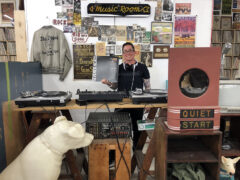 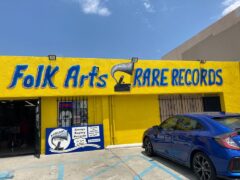 SDSU professor Yetta Howard is one of the people who took a turn at guest DJing recently. “One of the stores I made sure to hit on the mid-June Record Store Day drop was Folk Arts Rare Records, since it’s one of the most dependable spots for my weirdo-dark music taste. It was my first time at the new location in City Heights, which is at least four times the size of the old place. I was thrilled to discover that there were guest DJs spinning.
“I returned a week later. I hadn’t DJ’d for two decades since college but I came prepared with a loose sense of a setlist: Chrome’s “Animal,” Xymox’s “Obsession,” Boy Harsher’s “Motion,” Severed Heads’ “Twenty Deadly Diseases,” Falle Nioke & Ghost Culture’s “Barke,” Dirty Beaches’ “Nightwalk,” Coil’s “Teenage Lightning,” The KVB’s “Into Life,” and Chris & Cosey’s “Exotika” along with some postpunk, dark synth, experimental electronic, raw punk revival and noise-rock, such as Male Gaze’s “Smog Dawn” and Lyonnais’ “Pan Am Sun Isles.” The store was not particularly crowded, but someone came up to me and complimented my set mid-way through (he had also recently spun) and I noticed that a baby in a stroller seemed to nod along to my set!”
Local musician Andy Rasmussen split a two-hour set with his friend Jeff Lynn. Lynn played a mix of everything. But Andy chose to focus on classic San Diego musicians and bands: the Beat Farmers, the Cascades, Sandi & the Accents, the O.D. Coral, Iron Butterfly, and Esse & the Showmen amongst others. “It was an honor to bring the community together like that,” says Andy, who many may know as the producer of LOOKOUT!, a compilation of San Diego rock ‘n’ roll and popular music from 1958 to 1973. (Andy and his band, Action Andy & the Hi-Tones, will be playing the Adams Avenue Street Fair on Sept 19.)
“People like to come up and talk,” says Andy. One of Andy’s deep cuts was “Tobacco Road” by 1970s San Diego metal band Jamul. “People still recognize these songs” and want to stay after the set and reminisce. “People are bringing their kids. I saw a dad showing his 10-year-old daughter how to put a record on a turntable for the first time.”

Post-COVID, Brendan Boyle has some new long-range plans. He’s been working with San Diego’s KNSJ, a community radio station and a throwback in spirit to the free-form radio co-ops and “pirate radio” stations of the 1960s. The SJ stands for “social justice” and the current programming focuses on “talk during the day and music at night,” according to Brendan. Eventually, the idea is to build a broadcast studio inside Folk Arts Rare Records so that KNSJ can broadcast their shows live. Currently, the KNSD programmers, DJs, and show hosts are spread out over several home studios.
While Brendan plots his “future endeavors,” he’s content to relax and enjoy the day-to-day pleasure of running a record store. With all of the stresses of the past 15 months and the intermittent lockdowns, Brendan is ready to just hang out and talk music and vinyl with his customers. He’s also quick to give credit to his whole team: Scott Johnston, Harry Miller, and Stefanie Perricone. Together, they brought Folk Arts Rare Records into the 21st century while carrying on a tradition that would make Lou Curtiss proud. Brendan has even preserved Lou’s old telephone number. After pulling some strings with his phone provider, Brendan made it his cell phone number. So, in a way, he’s carrying Lou with him wherever he goes.
Folk Arts Rare Records
3610 University Ave. San Diego, CA 92104
Open 7 Days a Week 10am-6pm (and we often stay open till 7)
(619) 282-7833
brendanlboyle@gmail.com
https://www.folkartsrarerecords.com

This Music is for Dancing: A History of the NOLA Brass Bands