August 2022
Vol. 21, No. 11
Richard Larson: Rhythm, Beats, and Grooves by Bart MendozaAugust, 2021
Tiki Oasis Celebrates 20 Years of Exotica Mayhem and Fun  by Andy RasmussenAugust, 2021
The Lady Doctors Will See You Now by Laura PrebleAugust, 2021
Happy Birthday, Jeannie! Jeannie Cheatham Celebrates her 95th Birthday this Month by Jim TrageserAugust, 2021
Zach Caplinger: A Gifted Musician in his Own Right by Dwight WordenAugust, 2021
The Return of IPO San Diego: After a Five-Year Local Hiatus, David Bash’s Unique Music Festival Makes a Much-Anticipated Return by Scott SamuelsAugust, 2021
This Saw Is Not a Tool by Derek ShawAugust, 2021
Our Redneck Poet, Merle Haggard by Mark PulliamAugust, 2021
Linda Hoover: I Mean to Shine by Jon KanisAugust, 2021
Tom Griesgraber: Now a Member of the California Guitar Trio by Paul HomiczAugust, 2021
Advertisements 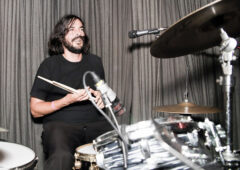 If you’ve attended many shows in San Diego over the past decade, it would be impossible not to have encountered drummer Richard “T-Bone” Larson. It’s been said that a band is only as good as its drummer, and Larson is as good as it gets—rock solid with just the right amount of attitude and his own brand of flair. An integral part of some of the most popular bands in town, it’s clear from the first beat that Larson loves what he does.
EARLY DAYS
Richard Larson is a rare native San Diegan. “My grandpa and mom were born here too,” he said. “For the most part I lived within a mile radius my whole life, in North Park. I finally got out about five years ago and moved all the way to South Park,” he joked.
Although Larson doesn’t come from a musical family, it was their input that placed him on the path to becoming a musician. “I grew up in a pretty chaotic home environment as an only child,” he recalled. “So, before MTV the only music I was exposed to were some old copied tapes my mom had that my friends and I would listen to: the Doors, Led Zeppelin, Eric Burdon, and so on.” Interestingly, the drums were not his first choice. “The drums didn’t actually jump out at me at first; we were just completely fascinated by the music and knew we had to learn to play something,” Larson said. “I was originally gonna learn guitar and my grandma even bought me one, but I had no teacher and couldn’t figure it out on my own. I did, however, have an idea what was going on with the drums just by ear and once I saw all the rockers on MTV having so much fun on the kit, I knew that was what I wanted to do. Steven Adler from Guns ‘n’ Roses was definitely my favorite. I was able to revisit Led Zeppelin from a drum-centric perspective and John Bonham quickly became my hero. I was also really into the lighter hitting guys to like John Densmore and Nick Mason. I played on cardboard boxes until I sold my Nintendo and comics and was able to buy a real drum set.”
Larson attended San Diego High School and notes that the experience played a major role in his musical development. “High school was really incredible,” he said. “The school band, even though it was woefully underfunded, taught me so much about music outside of rock ‘n’ roll. Orville Brown taught band and rondalla [Mexican guitar music] and I learned so much from him; he was a very important role model for me and someone I will always look up to.”
Larson was still in his teens, circa 1990, when he gave his first public performance. “I was probably 15 and we opened for the Downs Family at the Universalist Unitarian church in Mission Hills,” he recalled. “There wasn’t really anybody except the bass players parents when we played, so it wasn’t received all that well. It did lead to a lifelong friendship with the family Downs, though.”
Music is now his full-time focus. “Outside of my family, yes it is. I have a five-year-old and a beautiful wife, so they deserve a lot of my attention,” Larson said. “I just can’t find the passion or motivation to focus on anything more than music as far as a “real job” goes. Music just makes so much sense to me and is so rewarding. Luckily, I am also passionate about beer, wine, and libations, so that has led to 20-plus years of bartending as my day job.”
WHAT’S IN A NAME?
Liner notes and paychecks refer to Larson by his given name, but most of the scene knows him as “T-Bone.” How did Larson acquire the nickname? “Over the years I’ve tried to come up with silly stories like that I had tuberculosis (TB) as a kid, which I did, or that I survived a t-bone car crash. But the boring truth is that I worked at Corvette Diner and all the servers had nicknames. I was a busser at the time and the servers would put our tips in an envelope and there was another busser named Richard with the same last initial, so our tips would always get mixed up. I decided I would come up with a nickname that least represented my personality and T-Bone was born.”
As for gear, Larson has two drum kits: a 1965 Ludwig set (“which I use most of the time”) and a more modern turquoise sparkle Gretsch Catalina Bop Kit. “It’s an inexpensive set, but I think it sounds great,” he said.

Shawn Rohlf and the Buskers at Java Joe’s.

Lady Dottie and the Diamonds. 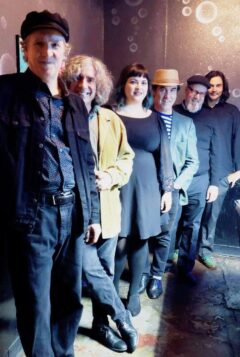 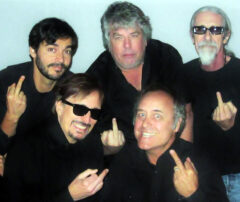 Folk Arts Rare Records: Is There a DJ in the House?