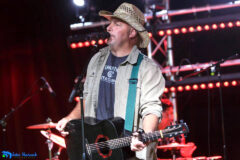 Meet Farm Truck, a Ramona, California-based country-rock outfit that is drawing much attention around San Diego County and beyond. The band has gone through a number of iterations since forming in 2015, but by 2019 Farm Truck’s personnel has been locked in, featuring the band’s founder, Craig Fischer, guitar/lead vocals; Tim Edwards, lead guitar/vocals; Mike Ashley, lead guitar; Wade Maurer, bass; and Dan Renwick, drums, in addition to recently adding fiddle/violinist, Patric Petrie.

Fischer, who manages an Olive Farm called ToothAcre Ranch when he’s not under the bright lights of the stage, recounts how the band came together to cement its current lineup.

“Tim Edwards was at the top of my list for a lead guitarist, so I was fortunate enough to ask him around the time the band he was in was breaking up in 2015,” Fischer recalled.

Edwards gladly accepted the invitation. “I played for many years in bar bands playing cover tunes and hence developed some chops trying to duplicate what the original artists were doing,” Edwards said. “I’ve been very fortunate to have the opportunity to work with a few bands playing original music, so it’s wonderful to have the opportunity with Farm Truck to use what I’ve learned to help songwriters develop their songs by adding color and texture,” he continued. “Craig is an outstanding songwriter; I’ve loved working with him over the past few years. The creative process between us is very natural and almost effortless and my guitar style seems to fit quite nicely with the style of songs he writes.” 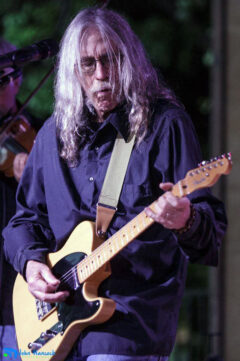 In 2018, they wanted to add a permanent second lead guitarist. A fill-in drummer they were using one night suggested they should audition a lead guitarist named Mike Ashley. “We did and he was the perfect complement to Tim’s playing,” Fischer exclaimed.

Edwards had no problem with the strategy. “Working with Mike as my counterpart on electric guitar has been an absolute joy since the moment he joined the band.” Edwards stated. “We appreciate and respect each other as each of us brings a unique approach to the stage stylistically, having a knack for working together without getting in each other’s way… it all comes together beautifully as we seem to have a very intuitive relationship.” In addition, on the advice of singer/songwriter Sara Petite, they brought in her former bass player, Wade Maurer.

In 2019 they found drummer Dan Renwick via a music advertisement and hence hired him as their permanent drummer. “I have so much fun playing drums with these guys,” exclaimed Renwick. “When I was first approached by Craig, I was a little hesitant. I’d been playing mainly rock and blues for a long time but I was not too familiar with alternative country. Upon listening to their original songs and the few off-the-beaten-track covers they were doing, I was totally sold,” continued Renwick. “Just a great group of intelligent guys with a sense of humor—not a bunch of egos—all dedicated to serving the music. Craig is such a gifted songwriter and that twin guitar attack along with Craig and Tim’s vocals make up Farm Truck’s signature sound. Our bassist, Wade, is rock solid and one of my absolute favorite human beings…he makes it so easy to lock down the bottom end.”

As far as hiring Petrie, it was a no-brainer as Fischer reflected back on that decision. “I had seen her play with the bands Skelpin and Calamity and thought she would be a great fit,” he stated. “She had been on my radar for quite a while…she is an incredible fiddler and brings so much to the band in the way of sound and stage presence.” Renwick was quick to second that emotion: “Our recent addition of the amazingly talented Patric on fiddle is the red-headed icing on the cake.” In response, Petrie detailed the process: “Originally they were looking for a hot chick with some cool fiddle licks, but she didn’t answer her phone, so they got me, instead,” she quipped. “Well, I hope I bring a little of sexy bad-ass fiddle to the mix, for one thing!” 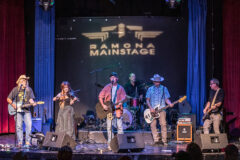 Farm Truck, the band, along with Patric Petrie on violin. Photo by John Hancock.

Fischer handles the booking for most of the Farm Truck gigs. “Living in Ramona you might assume we play a lot of shows there, but that’s not the case,” he stated, “although Ramona has become a well-kept secret with over a dozen live music venues…locally, we probably only play a half a dozen times a year.” Over the past year Fischer has expanded by booking gigs in San Diego’s North County, Temecula, Santa Barbara, and in Arizona.“When I started this band, it was to showcase my songwriting,” Fischer explained, “with my main goal of establishing ourselves as an original band. Tim, Mike, and I felt we had strong enough songs to pull that off, and so far that has been the case.

Depending on the venue, we can do full sets of originals or a 50-50 mix of covers and originals,” he said. “We decided that our cover songs weren’t going to be the most popular songs that a lot of other country bands play. If you come to a Farm Truck show, in addition to our originals, you will hear songs by Whiskeytown, Waylon Jennings, the Replacements, the Hangdogs, Jason Isbell, Tom Petty, Neil Young, and Wilco.”

“As a songwriter, my biggest influences would have to be Steve Earle, Tom Petty, Ryan Adams, and Gram Parsons,” Fischer points out. “As a band, we fall more in line with a lot of the Texas-Oklahoma Red Dirt bands such as Cross Canadian Ragweed, Reckless Kelly, Micky and the Motorcars…we have been described as putting Steve Earle, Tom Petty, and Crazy Horse in a blender, then throwing in a couple heaping spoonfuls of Dwight Yoakum.” 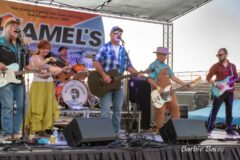 On Friday, October 14, Farm Truck will release their debut album, Sadie (reviewed in this issue), with a CD release show at the Ramona Mainstage. “We will be playing songs from the album, which we began recording at Langdon Studios during the Covid shutdown with our dear friend Steve Langdon recording, mixing, and mastering it,” Fischer exclaimed. “Steve, Mike Ashley, and I co-produced the album. It’s a bit different than what you would hear at a Farm Truck live show as we threw the book out for this recording by including dobro, pedal steel, 12-string guitars, B3 Hammond organ, piano, and horns,” he concluded. The album consists of nine originals and one cover and will include guest lead vocalist Sara Petite on that lone cover tune, “Baby Ride Easy.” Ashley E. Norton and Petite add background vocals on two other tracks in addition to Cheyenne Benton adding French dialogue on another track.

There’s nothing like a band that feels like family by way of their creative process and live performances, which Edwards succinctly summed up their hospitable band vibe: “There is a mutual respect and love for all the band members in Farm Truck. We love what we do and the people we’re doing it with,” with Resnick doubling down on that theme: “This ain’t just another dusty country band,” he emphasized, “these folks seriously rock and I’m proud to be a part of it!”