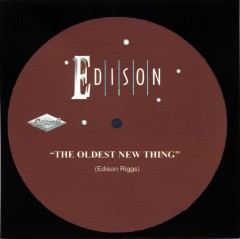 On his CD, The Oldest New Thing, East County singer/songwriter Edison Riggs plays and sings both secular and spiritual music pulled from several genres. The eclectic result avoids a musical rut, but at the same time, his 14-track disc becomes a scramble of secular, Christian, country rock, keyboard pop, and jazz music that never seems to adopt a distinct musical identity. There are some memorable tunes, though.

Recorded in La Mesa with studio help from Sammy Carini on acoustic guitar, Roger Baquial on keys, and Steve Reed on sax, among others, Riggs plays harp and a lot of the guitars himself, and his vocals dial in a good mixture of gospel power and hoarse country earnestness.

“What Is” opens with a sharp Latin-inspired guitar/keyboard riff that gives harmonized vocals by Riggs a groove while asking probing questions about what is real, what isn’t, and about God, and how to see Him. It is a good song; “Love Giving, Life Living” follows and is a plodding, meandering secular country-rock ballad that goes nowhere. These illustrate the disc as a whole: a strong first half, then faltering.

Riggs changes gears for “Love of a Woman,” a quiet piano ballad, with nice background vocals, and the song works as his vocal hits just the right emotional buttons. “Song Writer’s Tale” is autobiographical, and a lively, toe-tapping country romp as Riggs tells us of his God-given gift and the joy he has crafting tunes. A secular highlight on the disc is “Live and Learn,” with wicked country-rock guitar licks and big choruses: “Well my daddy always told me son/ Live and learn the hard way or don’t live at all.” Riggs hits the mark again with “Good-Bye Eyes” and manages to pull together a comfortable country-folk breakup ballad, telling her to just tell him to hit the road, and not give him those “whispers and sighs.”

“If You’re Gonna Get to Heaven” is one of a string of four songs with contemporary Christian themes late in the disc, and it is a stirring piece of rock gospel, blending a blow off the church roof sing-along with pulpit lyrics: “You won’t make it to God’s kingdom/ Just because you’ve read his works.” Riggs follows with “King of Kings,” with sincere lyrics of admiration for the Lord, he is trying to get a gospel feel going again, but with a blues piano and his crooning, it is a poor lyrical and arrangement mismatch. “You Got to Be Real” gets the full buildup, but sounds cluttered despite a nice guitar solo by Riggs.
Good thing it’s not a sin to put filler cuts on CDs. This is one of those 14-track, 47 minute discs that would have been better with 11 songs. One worth keeping is a disc-closing instrumental of “What Is,” with some nice, jazzy excursions by Reed, Riggs, and Baquial.

While The Oldest New Thing is something of a hodgepodge, Edison Riggs shows strong pipes and some songwriting chops in a variety of genres.

FREEBO: Something to Believe