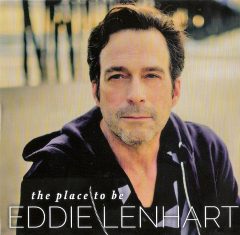 Eddie Lenhart’s first album was back in 2008; Levittown found the local Americana singer/songwriter singing country-pop influenced songs, many of them introspective. He followed up with 2011’s Darkness, similar with more stripped-down arrangements. Both times, Lenhart wrote the music and surrounded himself with top-notch San Diego musicians.

Lenhart is back with the place to be, a disc that falls midway between EP and CD at eight tracks and 29 minutes, but in many other ways revisits the territory staked out on his previous endeavors. The backing band includes his lead vocals and guitar, with three members of the Eve Selis band: Marc Intravaia on guitar, Rick Nash on bass, Sharon Whyte on keys, and includes Bob Sale on drums. This time, Lenhart puts his voice out there in the pocket on every tune, without harmonies or backing vocals. Good thing, then, that he shows more power and range than in previous efforts. The songwriting, however, does follow certain patterns: pleasant, innocuous mid-tempo rockers with similar feel and range, with choruses that repeat over and over being a Lenhart trademark.

“She’s Gonna Make It” kicks things off; Lenhart sings of a woman who is on the move, going out West for her shot at success. Lenhart’s lyrics have not been a strength on earlier recordings, and here, the phrase “she’s gonna make it” gets 18 repetitions. On “I Wait Here for Your Smile,” the ballad spells out Lenhart’s stance in a troubled relationship and a nifty Intravaia guitar break gives the tune a boost. The next tune is “I Can’t,” with much the same pace and feel as “I Wait Here;” Lenhart’s lover has another man, and he finally is breaking it off. On this tune, Lenhart’s vocal is probably the best on the disc, he pushes his instrument hard and carries it off.

The title tune expresses Lenhart’s ardor for LA, “All the boulevards and all the cars, and what the sunsets do for you and me/ And I realize I have to smile ‘cause LA is the place to be.” Maybe not a universal sentiment, but Lenhart is from Levittown, Pennsylvania and “LA is the place I found.” He affirms the vibe with lots of “hey hey”s and “ya ya”s, and of course many repeats of “the place to be.” He tries for some bluesy vocal inflections on “Another Tear,” like “cry-y another te-ear” with mixed results, sounding forced. “I Love You” escapes the sameness across many of the other tracks by working another good vocal effort by Lenhart with a guitar chord riff to good effect. The final track is a minor tour de force, “Six String Man,” with Lenhart turning the band loose and singing about how the guitarist is “playing where he can…back on the road.” This highlight is heavier than the other tracks, matching another good Lenhart vocal and Intravaia’s stellar guitar outro.

the place to be shows Eddie Lenhart in good voice on a mixed bag of new original songs.