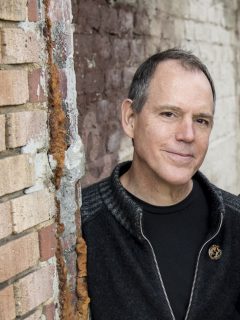 As singer-songwriter David Wilcox’s most recent album, Blaze, opens with the song, “Oil Talkin’ to Ya” something real and magical happens. It’s as if an invisible hand reaches out to the listener through the haze and fog of today’s crazy media dependency and says, “Come on out and play!” In the song, “Oil” represents the exhaustion of all that stuff that makes the modern world go into an overdriven distraction, but too often leads us away from the real life just outside our door. When all of those distractions are exhausted and evaporate, we have only each other to look to for love, community and joy.

So, “Oil” leads us on into another opus in the legacy of David Wilcox’s continuous cycle of songs that line our life’s highway like a gentle friend. When he sings the closing lines of that first song on this stunning, latest album by an artist who always continues to challenge and change with each new release, there is a sense of adventure that leads to what follows in the magic of words and music.

As Wilcox says about the new album on his website:

“It’s about feeling very much alive. It’s about the memories of leaving town on an ordinary work day, past the usual sights that don’t look so usual anymore because you have made your break with it. It’s about the point where the prairie suddenly changes, and the road drops down as the land goes from endless flat to carved out canyon-lands. In other words, life gets deep and complex and interesting.”

Blaze adds new dimension to Wilcox’s canon of material with an electric rock and blues sound that underpins many of the songs. The reason may be the addition of the former guitarist from the Americana band, Over the Rhine, Ric Hordinski who records at his own studio, Monastery Recording Studio, a former church in the suburbs of Ohio. According to Wilcox, who is collaborating with Hordinksi for the first time, “It was like hiking a new trail and seeing the vista for the first time, which was a surprise because the song changes in the middle of the take and suddenly I understand what the song means and I just go with it.”

Wilcox is widely known as the songwriter’s songwriter. He has a career that spans decades and a catalogue of songs that are not as much about making a commercial impact as they are about chronicling his personal observations of the life that surrounds him. He accomplishes this in ways that engage and inspire. Wilcox is the modern Thoreau seeking out the voice of “quiet desperation” in a weary world and bringing assurance that life is about so much more than silent survival. His observations on this album provide a sense of insight, curiosity and compassionate conclusions.

True to its title in multilevel ways, Blaze allows Wilcox to depart, on some tracks, from his folk-jazz acoustic textures to some harder-edged rock sounds that range from folk-rock love songs like “Ocean Soul,” which has a beautifully romantic mystical trance-like flavor to it, to the Led Zeppelin flavored blues-riff that opens “Guilty by Degree,” as he turns his thoughts to the abuse of the environment. The chilling “The Sacrifice” paints a cinematic narrative of the impressions of a police officer as he experiences the aftermath of the murder of a child. The narrator’s soliloquy-styled lyrics burn as we experience with him the discovery of the child on a rainy night, through the immediate investigation to informing the child’s family. It is a shining example of the songwriter’s empathetic portrait under the hardest of life’s situations. The album leaves us with a ray of bittersweet hope as Wilcox turns his writer’s perspective to a prayer directed to Martin Luther King. After Wilcox has walked us through the saddest of stories, he leaves us with the hope and the truth that the single candle we once called Dr. King still burns among us. His words reflect this:

A match will burn for long enough to light a single candle
A candle only burns until the conversation’s done
One bright conversation shines a light across a lifetime
Your quick life had time enough to shine like the sun.

The rock-based departure may be a bit of a jolt for those familiar with Wilcox’s work, but his trademark majestic New-Folk style shines through, emerging throughout the album. It’s a mix that, at times, may seem like a struggle between producer and artist, but the creative tension allows for Wilcox to open new doors into song-styles that break new ground. While the move may dishearten some fans, the end results are ultimately satisfying. All the while, the lyrical essence of the artist drives the sessions along, guiding us through the song-vision on the continuous journey of David Wilcox.

The range of his songs has always driven his appeal as an artist. He takes on almost any topic in song as long as it is a first-hand and original impression. It’s an approach that he learned early on when he first heard a friend playing guitar in a stairwell.

Today, he is known for a full, rich sound that translates dynamically from the studio to a live venue where, through skillful guitar playing, a rich baritone voice, and creative open tunings, he has developed a devout following over 20-plus years of performing and touring.

Through label changes and all of the technological breakthroughs and changes in the music industry that have caused many artists to fall into obscurity, Wilcox has kept his following and his recording career going strong, based on expert recording, intricately beautiful acoustic-based guitar work surrounded by jazz and rock textures, and songwriting that is sharp and acutely insightful when he speaks to both intimate and universal life-experience.

“Music still stretches out before me like the head-lights of a car into the night. It’s way beyond where I am, but it shows where I’m going. I used to think that my goal was to catch up, but now I’m grateful that the music is always going to be way out in front to inspire me.”

This Is the Day: Breaking Out of Obscurity with the Inmates

WAYNE RIKER: A Life in Music