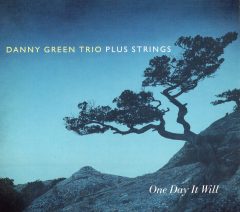 With their new CD, One Day It Will, the Danny Green Trio give us a musical tour de force with ten compositions that combine Green’s stellar jazz trio with a quartet of some of the top local string performers. The music is, at times, engaging, thrilling, and sublime.

The genesis of this project goes back to the previous release from the trio, Altered Narratives, which contained three compositions that incorporated a string quartet. This effort received a great reception, inspiring Green to try the formula for an entire disk. Many of the compositions are introduced as variations on short phrases or motifs, which is drawing more from classical traditions than that of jazz, which usually relies on the framework of a song form.

Jazz is all about spontaneity and the interplay of the performers, often at the expense of refinement, while refinement is the bedrock of the classical world. Usually in the marriage between the two there is something sacrificed. Performances of Gershwin’s “Rhapsody In Blue” will have plenty of refinement and little spontaneity. On the other hand, when Charlie Parker recorded with strings, the orchestra served primarily as background for the improvisational god.

The compositions of One Day It Will are a complete incorporation of jazz and classical, refinement and spontaneous performances. The theme or motif is developed and improvised on between the two musical units on an equal footing. Particularly on the title tune, it is delightful to hear this musical back and forth between the improvising trio and the lush orchestrations of the quartet.

There is a strong influence of Romantic composers for all of the selections. I hear Debussy and Mahler. As well, the recording, listened to as a whole, gives the impression of a tone poem, such as what Liszt and Richard Strauss produced. My personal favorite, the last tune on the disk, is “Down and Out,” a bluesy number with a great groove.

Green’s performance is inventive and fresh. I was reminded of Chick Corea’s period between Circle and Return to Forever. The rhythm section of Justin Grinnell and Julien Cantelm is solid. From my understanding, the string players are not a long-standing musical unit or a regularly performing quartet, yet their performance here does not reveal that. Recorded at both Tritone Recoding studio in Glendale and Peter Sprague’s SpragueLand in Encinitas, the production–all the engineering, microphone placement, mastering, etc.–is tops. The disk is beautifully packaged, with a cover photograph that conveys the mood of the music on the disk. One Day It Will receives six bonus points for having over an hour of music.

As I said before, folks have been putting together classical and jazz for generations, but the efforts here of Green, the trio, and the quartet are unique and exciting. I’ve really not heard anything quite like this and all involved deserve a great deal of credit for creating something groundbreaking. Tell your friends about this recording, request it on your local radio station, write your Congressional representative! Anything. Get the word out. The world needs to hear this music.