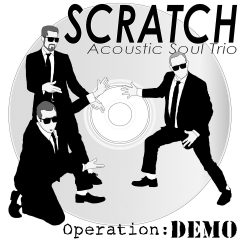 Scratch Acoustic Soul Trio has been playing locally for years, doing covers of popular songs; the members include Simeon Flick, Eric Oberschmidt, and Michael Strawbridge. All sing and play guitar, and they play an eclectic song list featuring tunes by just about everybody in multiple styles. No surprise, then, that their EP Operation Demo is both an enjoyable trip back to ’70s classic rock and sort of a five-track, unplugged guilty pleasure.

The set includes the Stones’ “Miss You” and, yes, it can be done with acoustics–in fact, these guys turn it into a tour de force, with both Flick and Oberschmidt firing off impressive solos while the group’s strength singing rich harmonies lift this and the other songs. The Doobie Brothers’ “Black Water” was played to death on FM radio, but Pat Simmons’ tune is a minor classic. Here they pull it off without fiddle, and with a near-tribute band lead vocal. Too bad the decision to put jungle bird call noises on the track to spoof it up adds nothing.

The best songs here are two marvelous covers of Van Morrison standards. “Crazy Love” is amped up with drums but still retains the charm of Van’s infectiously catchy original. The highlight of the set comes with “Into the Mystic,” which starts with a verse that almost perfectly copies the Moondance album original, then stacks beautiful harmonies upon one another as it plays out. They don’t make music like this anymore. Scratch Acoustic Soul Trio has found a musical identity and made Operation Demo is a fun listen.

DANNY GREEN TRIO PLUS STRINGS: One Day It Will