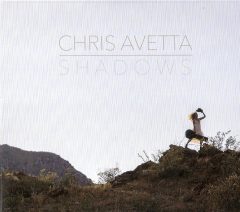 Chris Avetta is a local pop singer/songwriter whose debut album is Shadows. The independent release refers to her sound as indie-folk and forest-pop, and the slickly produced disc boasts eight LA-area studio musicians adding layer upon layer to those provided by the five string and keyboard instruments played by Avetta, who also sings her own backing vocals.

The set features ten originals, and the star of the show is Avetta’s high, breathy vocals. She generally makes the most of her range, though on a few tunes she seems to be pushing its limits, and the best moments often feature her making sweet harmonies that soar above the instrumental lattice work.
Not everything works equally well. “Dirty Lies” opens, one of those relationship testimonials about emotional abuse by an uncaring former lover. It never takes off and can’t transcend the heap of not dissimilar tunes in the Taylor Swift tradition; her vocal is at near-yell level, hitting the peak volume of the final choruses, then ends abruptly. Slowing things down and pulling them together works better, as “You Should Know” is a straight-up ballad that Avetta sounds in command of, as she tells a lover “Tell me that I’m losing my mind, I want to leave you/ Say you’ll be with me every night I need a love, a foolish kind.”

“Sway” generates atmosphere, as harmonies boost a foreboding vibe, about swaying in the breeze, with haunting echoes and a wall of keyboard effects. The masterful arrangement helps make it a highlight. The magnus opus of the disc could have been “Lyrebird;” it packs in all of the drama of a collapsed relationship, with a great harmony-based hook, building up to a climax that unfortunately never happens–because the song just cuts off to dead silence as Avetta is wailing at the top of her lungs.

By the time “Lions” hits the program, Avetta’s range is familiar, and this time, the ballad is built on a spare piano/violin framework that enhances her voice’s intonation wonderfully. She isn’t having to stretch to power this one through, as she stays high and sings “Is this my real life/ Or am I slowly losing my mind/ Darlin I never meant to do you harm/ Lately it seems that’s all I was good for.” The tune takes its five-and-half-minute time and is better for it. It is a stark and different highlight.
Banjo ushers in some unusual melody directions on “Coffee Stains” and (as with several of the best songs here) backing “ooohhhs” float down to join violin, the vocal, and the echoes of keys-with the banjo peeking out in the empty spots, as Avetta sings about uncertainty, time, and love. A more stripped-down arrangement of a zippier pop tune, “Seasons” works just as well, as bass and drums lead the way and her vocals still resonate and lift the song. This kind of thing is Avetta’s bread and butter, rather than anguished relationship ballads.

BLUE LARGO: Before the Devil Steals Your Soul