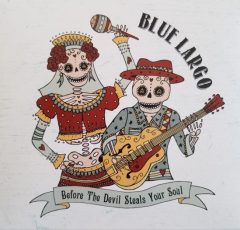 It’s been three years since we’ve heard new music from Blue Largo. The wait ended this month with the release of Before the Devil Steals Your Soul. Eric Lieberman and Alicia Aragon have assembled a talent-rich rhythm section from the wealth of Southern Californian artistry and the outcome is stellar. Of the 15 tracks, there are ten new Lieberman compositions and four cover songs. And almost all of them are designed to get you up on your feet. A special acoustic blues bonus track written and performed by Lieberman and album producer, Nathan James, closes out the project.

But make no mistake; this is a full-tilt big band with a solid blues core surrounded by brass, keys, and even a gospel chorale. They transition easily from swing blues to jump, jive, and jazz. Depending on the lineup, they are just as electric ripping up ’50s rock ‘n’ roll as they are putting their stamp on R&B classics and Motown soul. From start to finish this collaboration exemplifies the bands depth and diversity.

But it wouldn’t be a true Blue Largo project if it didn’t include at least a few songs of enlightenment and acceptance. Lieberman says, “The two that are most relevant to what is going on in our country today are ‘Wash Away’ and ‘Same Race’ and in my heart, these two songs are the crux of the record.” Both tunes serve up a gospel-tinged appeal for a world filled with more tolerance and less hate. Even the CD’s title track has a full chorus singing praises of hope… “Before the Devil Steals Your Soul.”
The band pays homage to Jimmy Ruffin with their version of “What Becomes of the Broken Hearted.” It fits nicely with the theme of “finding some kind of peace of mind” in today’s chaotic world. The same can be said for Blue Largo’s redux of Nina Simone’s “Feeling Good.” Lieberman says that song has a direct correlation to the song “Same Race” simply because of the way the outspoken Simone “used her music as a platform to speak to civil rights issues.”

Great traveling tunes, “If I Can Make It to Augusta” and “Monrovia,” keep your toes tapping and the Latin-tinged “Bodas De Oro” adds an International flavor. The Electo Rosell-penned instrumental highlights the musical interaction between Lieberman’s guitar, pianist Taryn Donath, and percussionist Mike Tempo. You realize a project is based in love and friendship when it’s dedicated to the memory of no less than six friends. That includes the track “The Long Goodbye,” which touches on the devastation of Alzheimer’s and how difficult it is losing a friend while they are still alive. My bet is the CD won’t leave your player.