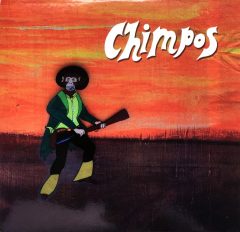 As the old expression goes, “We’re getting the band back together.” Chimpos did it for real, infusing a sort of zany OB vibe in the process on their disc Flung Like a Horse. The band is built around a nucleus of former Pt. Loma and Ocean Beach high school garage band mates (and lifelong friends) that took a 30-year break, then got together to put together an album.

The musicians involved include Thomas Yearsley (who plays bass and percussion, co-produced, and was recording engineer), Steven Sundell (vocalist, guitar, and co-producer), David Friendly (on drums, backing vocals, and co-producer), and other musicians who include Glen “Fish” Fisher, Jason Scheff (bass/vocal for Chicago for years), Eddy Allen, Matt Clowminzer, Laura Willcock, and several others. It takes a village–and in this project, Greg Hildebrandt is the “musical brainchild” of the band, who wrote all of the music and lyrics.

The sound certainly identifies with OB, and sounds like it was recorded during a party in the studio. The percussion and bass (none of the vocals or instrumentation is attributed in the sparse artwork) launch the tracks, as on the opener, “Ask Your Dealer,” and backing vocals chip in while guitars funk things up. Overlaid over the first five tracks is the lead vocal voiceover, talking to the listener from both channels while answering the backing groove. The next track is much the same, “Exquisite Naked Corpse,” as the bass/drum hook is solid as bedrock, and electronic squiggles sneak in as the voiceover is singing more than talking-it is a propulsive highlight, and turns seamlessly into “Drink Some of This” as the songs become a sort of suite, which leads into the quirkiest track of the set, “Cabbage Abstinence.”

All of this is played tight but has a loose party vibe, with clever lyrics that are recited and sung almost in almost offhand manner; the Chimpos are not trying to impress the world with artistic finesse but beneath the surface there are serious beats and riffs happening. The second half of the album continues to push quirk buttons; “Monkey in a Space Suit” is sung in a mock English accent, and “Memphis, Home of Elvis” is a live in the studio, knobs-up rocker that uses Chuck B’s old classic as the chassis for a tune about a fantasy reunion with a revived Big E.

For those that might have given “Monkey in a Space Suit” a pass as a goof number, here comes “Killer Tsunami Wave.” Over a surf drum/guitar lick, the vocal is using a lifeguard bullhorn to warn everyone to get out of the water, and “If you live in the valley, this is your time to enjoy your backyard swimming pool. No, this is not a big swell. This is a killer Tsunami wave.”

The fun isn’t over, “Play With Me” wraps with an almost straightforward song (probably the closest thing to it on this disc), with a guitar solo bridge, and plays out with a litany of send-outs to many of the businesses and hangouts there-easy to see why the Chimpos call it home.