February 2023
Vol. 22, No. 5
Bastard Sons of Johnny Cash Headline the Julian Dance and Back Country BBQ by Bic MontblancJune 2016
Jeff Beck: A Tribute by Ted BurkeJune 2016
Marcus Petronius Bashore: The Best Seat in the House by T.E. MattoxJune 2016
Pacific Wave: A Surfin’ Safari June 2016
The Winter Dance Party 1959: The Night the Music Lived by Terry RolandJune 2016
Back with a Bang! Java Joe's Reunion at San Diego Folk Heritage by J.T. MoringJune 2016
Book Review: The Philosophy of Modern Song by Bob Dylan by Ted BurkeJune 2016
Rick Nash: Bass Man in Demand by Wayne RikerJune 2016
Mod Revivalists the Trebels to Reunite for 40th Anniversary Show by Jim TrageserJune 2016
If Music Be the Food of Love, Play On: Dually Noted Pairs Fine Food and Fine Music by Paul HomiczJune 2016
Advertisements 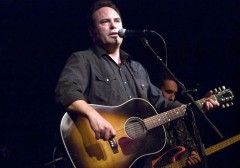 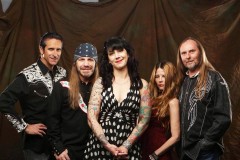 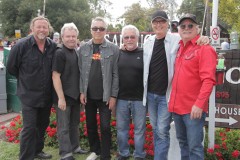 Julian is the jewel of San Diego’s back country and Menghini Winery is the site of the tenth annual Julian Dance and Back Country BBQ on Saturday, June 11th. This outdoor event features the best in country music, a huge dance floor with a tree in the middle, and the ambiance of a small town. Throw in the fabulous Santa Maria-style barbeque beef and chicken slow roasted over oak coals, a vegetarian option, craft beer, wine, soft drinks, and a separate entertainment area for the kids and you get a throwback event that is unparalleled anywhere.

The Julian Dance is the brain child of the Sons of the American Legion to help raise funds for Veterans and worthy charitable causes in their community. What started out as a small community happening has grown to one of Julian’s biggest events.

For the second year in a row the show is headlined by the Bastard Sons of Johnny Cash, coming in from Austin, Texas. San Diego native Mark Stuart was so impressed by the hospitality of Julian and the charitable mission of the Sons last year that he said he’d be honored to come back for another show. He is back with a great band, playing original country music. Make no mistake, the BSoJC are not a tribute band but a well known entity on the country charts. The great thing about the show is that you’re not saddled to your seat. There’s a huge dance floor where you can two-step, swing, or just get up and move under the twinkly lights that are reminiscent of a long-ago time in the country. The BSoJC take the stage at about 8pm.

At about 5:30pm Swingshift out of Orange County takes the stage. They’re previous dance headliners that wanted to be part of the tenth annual. Ed Reiner brings his crew featuring Paul McIntire on fiddle, Smilin’ Art Holland on lead guitar, Ed Rys on drums, and Mike Barry on bass. If you like classic country music this high-demand band is not to be missed.

The gates open at two but don’t be late because Julian and San Diego favorite Three Chord Justice opens the show at 2:30pm. Liz Grace fronts this popular group on vocals and guitar. Liz is an eclectic performer and sings everything from “Honky Tonk” to “Big Band” tunes in a jazz group. For this event though it’s going to be Country. Jeff Houck was a cofounder of the group and plays lead and Dave Preston on bass played with the Working Cowboys at the first Dance. Mark Markowitz is on percussion and for a special treat Randy Hess will join the group on pedal steel. The sound that fills this large outdoor venue and stage lighting is provided by Sonic Mountain Sound.

Tickets for the event are $25 at the gate, or online up to the night before the event at juliandance.org for $20.00. Kids 16 and under are just $5. Active duty service men and women get admitted free. Furry or feathered friends are not permitted except for service animals. Food and drink are available at a separate cost. Don’t forget to bring your ID.
The kids area is open until about 7pm, with plenty of activities including bouncy rooms, face painting, and a giant water balloon fight. There will be an ATM at the event and parking is free. Mountain nights can be cool, so bring appropriate clothing.

If you would like to be a sponsor of the event or would like to have a reserved table, honor a loved, past or present service member on the Wall of Honor, go to juliandance.org for information.

If you didn’t grow up in the country in a simpler, earlier time, the Julian Dance and Back Country BBQ will be an eye opener. For those of you who remember the Grange Dances of yesteryear, you’ll be thrilled with this throwback event, featuring friendly people, warm evening bonfires, great food and music, and the knowledge that your hard-earned money will go to worthwhile charitable causes.