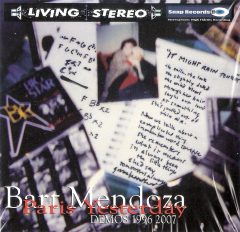 A true San Diego original, Bart Mendoza has been a linchpin in the local roots music scene for what seems like forever, as a journalist–for the Troubadour and multiple other local as well as international publications–and as a songwriter and musician with contributions to over 30 recordings in a 30-plus year career. San Diego’s resident Mod has cut many albums and EPs with the bands Manual Scan and the Shambles, plus many others and is a member of the San Diego Music Awards Academy.

Mendoza’s latest is Paris Yesterday Acoustic Demos 1996-2007. They offer a glimpse into the creative process, the 14 songs in varying levels of polish recorded in different places and times over that span. The songs aren’t all acoustic, and though there is a bit of help on a few tracks, mostly on percussion, this is Mendoza, front to back, playing what he calls “song sketches for guitar and voice.” He wrote or co-wrote all of the material.

Most of the sketches last two minutes, some shorter, but Mendoza’s influences from the British invasion crop up frequently. On “Rain or Shine” and a couple of other songs, the listener immediately wonders why the song wasn’t made into a finished, Beatlesque minor triumph with maybe keyboards or a bit more gloss. Mendoza’s double-tracked vocals are right out of the Badfinger/ Searchers/early Who and Kinks toolbox, the arrangements on such songs as “Patron Saints” give the feeling that they could work as harder and more electrified rockers–but they also seem to work as slower ballads. “Taking Jaded” has simple keyboards along with the wooden guitars, and drums–it is a clever, crisp rocker with no wasted energy.

“It Might Rain Tonight” is a highlight, plugged in with Mendoza not holding back, and it bores straight through its Who-power chord intro verse into unexpected changes of pace, as it climbs bridges of minor and seventh chords. Another song that steps a bit outside of the pop box is “The Last Time Life Was Perfect,” under a minute and a half, Mendoza is playing ear-catching minor chords on the guitar and his echo-drenched vocal laments the loss of a lover. A more complete arrangement might turn this one is into a stronger, powerful ballad.

An unusual track, “Bleeding” is all acoustic guitar and Mendoza, working a melody and lyric about his dedication to a lover: “Can’t start over, that’s for sure/ We’re not welcome anymore/ We’re all the things that we ignore/ As we lay bleeding.” The tune has an “up” vibe and a “down” lyric that make it work. “This Wish” has a melody and arrangement with a drop baseline guitar riff and chord structure that recalls early Who-and works really well as a result. The CD closes with “Paris, Yesterday” and Mendoza, with a whole band of instruments, makes his point: he doesn’t need to live forever anymore, and “Paul Weller trashed his hotel room in Paris yesterday.”

Bart Mendoza’s new CD has some fascinating moments and revealing looks at music being formed.