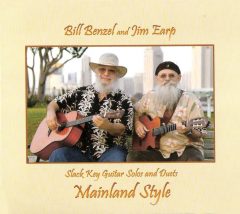 Instrumental guitar fans will be glad to hear that noted Hawaiian slack-key guitarist Jim Earp has teamed up with Bill Benzel for an album of slack-key duets, Mainland Style. The dozen tunes feature Earp on electric nylon-string guitar and Benzel on either baritone or steel-string acoustic. The mixture of originals by the two and familiar standards are all played in slack-key tunings. The selections cover a pleasing palette of styles, some touching on Hawaiian traditions, others hitting jazzy rags, folk rock, and the Beatles, all immaculately recorded. A lot of choice fingerpicking is combined with a calm, dignified respect for the technique.

Scott Joplin’s “The Entertainer” kicks things off, featuring both guitarists. The arrangement enables them to fill out the sound, giving bottom to the bass end, while decorating as well as spelling out the melodies, and giving a hint of Hawaiian accents here and there–in these ways, it sets the tone for most of what is to follow. On Earp’s “Dinuba Morning” Benzel plays a familiar alternate tuning used often on the album–open G–but Earp is playing in standard tuning, with a capo way up on fret seven. The effect is a mix of high and low accents and ethereal harmonics added by Earp.

Just about everybody knows “Mr Bojangles,” but Earp and Benzel’s reading uses baritone guitar and some tasty Earp picking to give it a new injection of vitality, as once again the arrangement finds little spots to fill with filigree statements that make it more interesting. “Moe’uhane Hula” is a solo piece by Earp, with breezy slack-key phrasing that the listener doesn’t have to think too hard to visualize as a dance theme. It’s unhurried, smooth and a disc highlight. “You’ve got to Hide Your Love Away” tries to capture a folk-rock Beatle song and almost does, but the song has so many moving parts that it seems to get away from the guitarists before they realize it. Earp is back solo for “Kili,” which is another winner that benefits from simplicity.

The two team up on “Sugar Cane Train,” using the same guitar setup that worked on “Dinuba,” and it clicks again as this adaptation of “Freight Train” seems to chug along just fine with Benzel holding down the bottom and Earp the top. “Running with Grunion” will interest guitarists as a song with five of the strings tuned to C# and F#; the Benzel solo tune has a rag feel and even throws in a few bars of bluegrass-style picking as he lets go with some out-of-the box flash. “Hotel California” is almost made for slack-key guitar, and these players don’t miss their chance. The song has the perfect beat for the “one, two” beat of slack key, and they include all the fills; the vocal harmonies are played as guitar harmonies. The finale has the unison picking that marks the Eagles tune, gone are the guitar solos that most listeners are tired of anyway.

Mainland Style is acoustic guitar at its finest from Bill Benzel and Jim Earp.