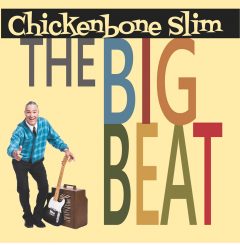 Chickenbone Slim is the alter ego of long time San Diego bluesman Larry Teves, bassist, vocalist, and songwriter who many remember as the leader of the popular area blues band the Boogiemen. The Boogiemen were a crackerjack jump blues band in the style of Little Charlie and the Nightcats and, a bristling, swaggering bunch of dedicated blues hounds filling taverns throughout the county with their combustible, guitar and harmonica-driven approach to hard blues swing. The Boogiemen are no more, alas, but Teves is on the scene again in the guise of Chickenbone Slim, with a new disc, The Big Beat, which continues the blues orientation. As expected, there is a difference in this recent incarnation, which is that Chickenbone is more than the brawny bluster of riffing over the changes and singing about drinking, smoking, and driving around looking for kicks; the blues are here–the backbone of the Teves-penned songs–but there has been growth. Life has happened, experiences have changed tone, and responses and reactions cut a bit deeper. These are songs from one who’s been through a few situations, has fought his way out of some tight spots, problematic circumstances where it’s something different each time that rocks this blues man’s world. Following suit, the bluesman Chickenbone goes for a broader musical palette, beginning with the swerving, off-kilter strut of the title song “The Big Beat.” A seasoned narrator finding similarities in following the drummer’s accents and the flow of one’s bliss, a message underscored and firmly moved forward with the brash harmonica punctuation from multi instrumentalist Jon Atkinson. The mood becomes more laconic with the strutting and stirring ‘Long Way Down,” a rueful recollection of paying the cost to be the boss, the popping rhythms nicely framing the spare, stinging, and appealingly gruff guitar work from Scot Smart. “Hemi Dodge” goes the other way stylistically, a country jaunt, a road song braced on lonesome harmonica moans and Chickenbone’s sly, galloping guitar. Chickenbone intones the song in a comically talk-sung manner, a dead pan that very much made me think of a man sharing the wisdom of his experience mere minutes after his most recent disaster. Folk, funk, swing blues, and the swampier varieties of soul and funk inform this refreshing variety of styles. Chickenbone Slim, nee Larry Teves, brings us the blues from neighborhoods where most of us actually live. He plays a rangy kind of music, writes songs with the terse and sharp wit of someone who knows the meaning of living paycheck-to-paycheck. It’s punchy; it’s full of inescapable hooks, cutting guitar and gold-toned harmonica wailing. The Big Beat makes you glad you got out of bed and poured that first cup of coffee.