February 2023
Vol. 22, No. 5
Back in Action with M. E. Law by Frank KocherJuly 2016
Jeff Beck: A Tribute by Ted BurkeJuly 2016
Marcus Petronius Bashore: The Best Seat in the House by T.E. MattoxJuly 2016
Pacific Wave: A Surfin’ Safari July 2016
The Winter Dance Party 1959: The Night the Music Lived by Terry RolandJuly 2016
Back with a Bang! Java Joe's Reunion at San Diego Folk Heritage by J.T. MoringJuly 2016
Book Review: The Philosophy of Modern Song by Bob Dylan by Ted BurkeJuly 2016
Rick Nash: Bass Man in Demand by Wayne RikerJuly 2016
Mod Revivalists the Trebels to Reunite for 40th Anniversary Show by Jim TrageserJuly 2016
If Music Be the Food of Love, Play On: Dually Noted Pairs Fine Food and Fine Music by Paul HomiczJuly 2016
Advertisements 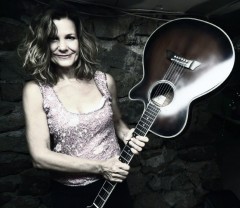 She’s a veteran performer, a singer/songwriter who has performed extensively in Canada, the Far East, and, more recently, Baja, California. HerÂ  music is at the same time soft and ethereal and wickedly satirical and clever–with lyrics that have to be listened to. Her melodies may be Bossa Novas or floating folk themes and can change in the next moment into a quirky observational blues or jazz statement about our ever-more puzzling world. M E Law has a uniquely Canadian view on life and music. Her career has included some valuable and unique experiences, including paying her dues in clubs with Sumo wrestlers and witnessing fights between sabers and chain saws.

She started young. “My family was extremely musical. We had every instrument available. Banjos, guitars, piano, old violins, drums–my dad was an amateur musician. My whole family likse to sing; at our family gatherings there was never a stereo on, it was always just us, my uncles playing instruments and everybody singing.” Her father had a collection of old 78 RPM records, including “Deep Purple,” the Tin Pan Alley song, not the hair band.

“I loved pop music. Being Canadian I loved folk music like Gordon Lightfoot and Joni Mitchell. I had two older brothers whose tastes were very different. One was folky the other was funky, so I got to hear everything from Lightfoot, Mitchell, and Neil Young to James Brown and Elvis, a major cross-section. There aren’t many styles I don’t appreciate. I just love it all, and that has been a blessing and a curse as far as my career goes. I’ve never been able to be pigeon-holed. Now, I think I have worked it all into a cohesive style that blends together.”

As for favorites and influences, they are also all over the map. “Jazz is kind of what I listen to; there’s Sarah Vaughn, Anita O’Day. John Prine, and Shel Silverstein, definitely big influences, because I always loved funny lyrics. And Shel was amazing because he could go from funny to poignant. And Chet Baker, Oscar Peterson, StÃ©phane Grappelli, and instrumental stuff.”

After early training on piano, she picked up guitar at age 14 and set forth from her hometown in Ingersoll, Ontario to play in Toronto, and later, Vancouver. She toured extensively, playing as a solo or part of several bands and duos. In the late ’80s, another career and geographic move beckoned… to Japan. There, she experienced playing as the house singer at a piano bar in Nagoya. These days as a working musician led to some great anecdotes.

“Touring Northern British Columbia, they would send me up to these little mining towns. Sometimes I would be the first woman these guys would see for months at a time. One day, it was during the day, I was coming down the stairs to go for lunch in the restaurant when I hear this blood-curdling scream; I see this native guy with long braids running out of the bar, and behind him is a Sikh guy with a gigantic knife–it was like a machete–I don’t know how he got it in there. I guess they were playing pool and got into a dispute over cheating. He ran outdoors–this is in the middle of winter and it’s 40 below zero, but the native guy ran to his truck and grabbed a chain saw. I don’t think they killed each other, but that was the kind of place that I’d get sent to. That was up in Smithers, British Columbia. It was a 21-hour bus ride.”

In Japan, another experience found her playing in a club, with a horrible pianist, and ready to go home. “It’s quarter to one in the morning. I want to get out of thereÂ  when I see these two huge Sumo wrestlers come lumbering in. They sat down and suddenly within seconds there were platters of sushi coming out and the finest whiskeys, because these guys don’t pay for anything; these guys are big stars. Next thing you know, I am being called over, getting pictures taken with them. Within 20 minutes they had polished off all the sushi. As part of their entourage, there was a guy who was making obscene faces at me as I was singing. He had the crew cut, the gold jewelry, and was missing three fingers on his right hand.” He was Yakuza, and ignoring him didn’t work.

“So, I finish and I say goodnight and I go to the elevator, and I hear the two Sumo wrestlers who are they’re headed for this tiny elevator. I think, ‘Oh my God, are we going to hold?’ Next thing you know, they get in, and the Yakuza, the little pervert guy gets in, gets behind me, and reaches up and grabs me most inappropriately. I turned around and I smacked his head. It was a reflex, it was just automatic; I have that in me.”

Undeterred, the guy grabbed her again, and got bitten on a finger for his trouble; by the time he tried retaliating with a punch to the arm after the elevator opened, Law’s answer was a roundhouse punch that landed him spinning on his butt. The gangster/offender ran off, to the laughter of observers. The episode ended with the biggest Sumo holding petite Law’s arm aloft like a champion, saying “Good action, rady.” Law promises to make this encounter part of an upcoming one-woman show.

Returning to Canada, Law became involved with more projects, and recorded a ballad, “Valentine in May,” in 1995. She later studied jazz piano and recorded a CD, The Cheerful Cynic, before moving to San Diego in 2003.

Playing music is not her only talent. She helped produce an award-winning documentary film, Wiener Takes All, with her husband, Shane MacDougall. Law wrote the score for the movie about Dachshund racing, which took several years of time and effort. The rare documentary, to recoup its investment, enjoyed a theatrical release and appeared in over 40 festivals.

Law had a medical hiatus due to “massive health issues,” a cervical spine fusion with nerve damage that put her playing and performing on hold for six years following the 2007 release of the film. During this time, her songwriting didn’t take a break, and she began painting–a talent she continues.

“I wrote a ton of songs; I never stopped writing but getting out and playing wasn’t really doable for me. Two of the people who helped me get back were my husband and creative partner, Shane MacDougall, and my Canadian publicist and old friend Linda Turner. So I started going back up to Canada to work again in 2014, and in Baja starting again in 2014, returning to my paid work.”

Two important contacts she made were local musicians Charlie Imes and Christopher Dale. After meeting them at the Meeting of the Mindless festivals in Baja, Law has been asked to sit in with them when they play locally.

“I do love to play harmonica with other people, so I do that with Charlie, and Christopher lets me get up at his shows and do some sets. They are so generous. Also Donna Larsen, who in the past year has invited me to do some showcases; so everything I do here is like rehearsal, it’s unpaid showcasing. It’s been about 10 months since I started playing out–it’s been about connecting with musicians and getting my chops back. It’s been wonderful. Also, Java Joe gave me some showcases, with some great people who have been around for a long time–on the same stage with Lisa Sanders, Gregory Page, and Jeff Berkley. And Robin Henkel has been helping me learn slide guitar.”

She recorded a full-length CD in 2013, Peace, Love, Death, and Chocolate, which is an excellent primer on Law’s uniquely slanted view of the world. Some of the song titles are metaphysical, with floating melodies and Law’s high, almost angelic voice. Listen to the words, and the other side of her persona comes through–the funny, irreverent “Part Time Angel” who writes an entire love song to chocolate, and another telling an errant suitor that “Your Mouth Is Bigger Than Your Brain.” Listen carefully or you might miss a zinger or two.

“I do like to juxtapose it with the pretty melody and I have a pretty voice, so that is part of it too. My whole life I’ve been judged on how I look and how I sound, and, in fact, my brain, the driving force behind the lyrics is going, ‘Uh… no.’ I like to keep people guessing. I think I’ve always had that inclination to make fun of things. I’m Canadian and that’s what we do; we make fun of stuff, especially ourselves.”

2015 saw the release of a comedy EP, Laughing My A.O., more songs laced with satire, including “12 Stepping Out,” and the clever “Validation Junkie.”

“Actually, that song is going to be the opener of a one-woman show that I am writing, called Where Ego, I Go. When I play that out, people start with a just a shy grin, then by the end, they’re smiling and nodding and going, ‘Oh, yeah, that’s me.’”

She has been recording recently, too. A new CD, with five new songs and two older bonus track,s is nearly ready for release. As on her last two, the producer is Nick Blagona. A long time engineer for artists like Deep Purple and Cat Stevens, he has been Law’s studio partner for two decades.

“I’ve known him and his wife, M J Russell, who sings with me when I’m in Canada. She’s my backup singer and percussionist. They are like family to me. He likes a very simple, real natural sound. There will even be a few little clunkers, and he’ll say, ‘No, keep that for authenticity.’”

For now, Law is dividing time between her work in Baja, where she has appeared the last three years at Melodie Honey’s festival in San Felipe with artists like Imes, Dale, and Law’s friend and Grammy winner Natasha James, and the early July Canterbury Festival in her hometown of Ingersoll.

“It’s been going for 15 years, and three years ago I thought I would throw my hat in the ring and see if they would take me, and they did. Now, I am going for my third year. I got to meet one of my idols when I was up there a couple of years ago: Murray Mc Lauchlan and he was super nice. With Canadian celebrities, it’s a different vibe, it’s very low-key. Last year was Garth Hudson of the Band; he was the feature and I got to meet him. This year it’s David Clayton Thomas, from Blood, Sweat, and Tears. They usually bring back these older icons as the feature, so it’s a nice mix of lesser-knowns and really iconic people.”

As far as her adopted hometown, Law says, “I’m here in San Diego and having so much fun, just playing for people in any capacity. And meeting all these folks associated with music and other musicians, it’s been very joyous for me.”

This Is Andra Day