February 2023
Vol. 22, No. 5
SABA: Music from Life’s Lessons by Lucia VitiAugust 2016
Jeff Beck: A Tribute by Ted BurkeAugust 2016
Marcus Petronius Bashore: The Best Seat in the House by T.E. MattoxAugust 2016
Pacific Wave: A Surfin’ Safari August 2016
The Winter Dance Party 1959: The Night the Music Lived by Terry RolandAugust 2016
Back with a Bang! Java Joe's Reunion at San Diego Folk Heritage by J.T. MoringAugust 2016
Book Review: The Philosophy of Modern Song by Bob Dylan by Ted BurkeAugust 2016
Rick Nash: Bass Man in Demand by Wayne RikerAugust 2016
If Music Be the Food of Love, Play On: Dually Noted Pairs Fine Food and Fine Music by Paul HomiczAugust 2016
Mod Revivalists the Trebels to Reunite for 40th Anniversary Show by Jim TrageserAugust 2016
Advertisements 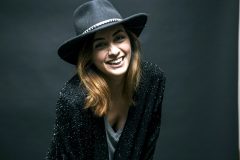 Saba, a musical talent so exquisite, her first name stands alone in recognition; last name need not apply. Saba, a woman that leaves an indelible impression–once met never forgotten. Saba, a dark-haired beauty that emulates humility while her eyes leave you breathless. Saba, a graduate cum laude from life’s school of hard knocks. Saba, a sensitive, articulate poet; a musician gifted to the world of music. These words orbited my writer’s brain within minutes of meeting the Persian maven in a downtown cafe that served gratitude as its main course. I wondered how–and if–I could successfully translate all that bubbled, albeit cautiously, before me. Although excited by the prospect of hearing her story I could detect an underlying refusal to allow just anyone access to the narrative of her heart. Honesty and integrity were hard-lined prerequisites. Tapping into the genesis of songwriting that processes pain required trust. Although I had yet to prove myself, it was now time to pry and unveil: who is Saba?

Saba burst onto the San Diego music scene as a singer-songwriter in 2002. Determined to launch a career based on the integrity of her music, the solo artist founded Spinster Records in 2003. Within a year, the newcomer earned consecutive nomination nods (2004 and 2005) from the San Diego Music Awards. White Knuckled Love, Saba’s seventh–and latest–album (reviewed in the April 2016 edition of the San Diego Troubadour; https://sandiegotroubadour.com/2016/04/saba-white-knuckled-love/) highlights what fans already know: a voice that transcends the norm. Raspy, rich, melodic, mellifluous, and silky-smooth soothing vocals express ownership of her new direction, “my rules, my way.” Sporting an acoustic guitar against the backdrop of a full band, including a violin and cello, Saba’s ensemble electrifies. Co-produced with Ben Moore at Singing Serpent Studios, White Knuckled Love heralds triumph within the realm of trials, tribulations, heartache, heartbreak, betrayal, and unrequited love. In layman’s terms, mess with this chick and you lose.

“White Knuckled Love exemplifies finding my power, my backbone,” Saba says. “While my earlier songs focused on the pain and sadness of life, White Knuckled Love focuses on direction not reaction. I will no longer stay in a powerless situation. I won’t grasp on for dear life until my knuckles are white. I will walk away without waiting for permission to leave. I will take ownership. I own my empowerment. We all do.”

Saba described White Knuckled Love as her favorite album, “because it’s indicative of who I am today.” Prevailing themes include strength of character, self-worth, integrity, dignity, and the value of letting go.

“Today, if you screw up you’re out,” she states. “My worth is not tied to anyone. People reveal who they are by what they do. I’m not swayed by what’s happening around me. I’m no longer a victim. While I believe in destiny, I make responsible choices that support change. I make decisions with faith and confidence. I’m real. I don’t compare myself to anyone. I compare myself to who I was two records ago. Everything else is arbitrary.”

But that wasn’t always the case. Although born and bred from parents who were musicians, the musician/songwriter didn’t even know she could sing until nailing karaoke while attending UCLA. Once discovered, the college graduate groomed herself to become a performer. In 2002 Saba played the open mic at Twiggs, San Diego’s musical hub at the time. Albums and accolades were quickly garnered. Saba introduced herself with an acoustic demo, appropriately named Self-Titled in 2001. Letters to Doe, Saba’s “coming out record,” a melancholy, sparse, and melodic collective of ballads showcased Even Less noted still as a song favorite. Words tantalize and haunt–I would hide my skin to keep you from seeing all the scars that lay bleeding and all the wounds / all I could do is keep my head up and pray–as Saba’s melodies cemented her status as exceptional.

“Little did I know that Even Less would be a favorite while White Knuckled Love would detail how much I’ve learned about life and love,” she says. “The 20-something Saba didn’t know anything about life although I thought I had all of the answers. More than 13 years have passed in between and if I knew then what I know now, I’d tell that Saba to ‘Buckle Up! We’re in for a hell of a ride!’ And, oh yeah, ‘I have your back.’”

Painting Ceilings, recorded live in 2004 at Lestat’s coffeehouse and Elbo Club, written in homage to the bar of the same name followed suit. Powerful, energetic, and jazzy, Elbo Club shares years of what Saba described as dark days of drinking and partying. “Caught up in the party/bar scene, I lost focus, direction, and momentum,” she continues. “No drugs, but the drinking was damaging and the lifestyle was wrong. Stagnant, I moved to LA to regroup.”

Saba played corporate by day, utilizing her Bachelor of Arts degree in political science, while performing occasionally at night and writing feverishly for her next album: Fall Out. Recorded on a commute between San Diego and LA, the EP celebrated the end of her “destructive” period. Mellow mixes with heartache in “So Empty Now” and “Everything I Couldn’t Be.” But true to form, Saba reconnects with her growing inner strength, crooning, “You must be a fool to think of letting something good just leave / When you sober up you’ll see that the best damn thing you had was me” in Fall Out’s first track, “Best Damn Thing.”

In 2012 Saba moved back to San Diego. Grounded, mature, and determined, she learned how to use pro tools to produce and record everything but drums on her next album, titled 8.

Strong, country-sounding melodies express grief, sorrow, tenderness, kindness, and compassion. Saba never steers far from “elements of insecurity familiar to everyone. We must make decisions to forge forward regardless of what’s going on inside our heads. That’s the courageous part of being human.”

Saba’s candidness takes center stage. “My lyrics are straightforward,” she explains. “Nothing is vague; everything is relevant. I don’t hide behind artsy. Honesty and self-acceptance are huge. My words reflect personal experiences. My inspiration comes from painful experiences. Hemingway quotes, ‘Write hard and clear about what hurts.’ I take that to heart.”

When asked about the depth of “what hurts,” Saba quickly points out, “I’m not compelled to write happy, I’m-on-top-of-the-world songs, even when I’m happy. I’m too busy being happy.”

The 36-year-old admits to writing “dark” music while living a life of balance because “music isn’t a life where the dots connect in a straight line,” she says. “But as dark as my music is, I laugh a lot. I like to be around positive people who don’t complain or blame anyone for their circumstances, however difficult they may be.”

Delving deeper, Saba stalls until an underlying shadow pain rises to the surface. “While my relationships have taught me about love, my family–my parents and my brother–taught me about life,” she whispers.

At age 13, Saba’s then two-year-old brother was diagnosed with Leukemia. For nearly a decade, her parents were gone for weeks at a time, “if not more,” during his treatment. Alone became a lifestyle while music became a refuge. The young teenager travelled with bands and orchestras after school and weekends ‘to fill the space and silence of home.’ Saba’s coping mechanism bestowed life lessons of independence, self-care, self-discipline and ‘respect for my parents for what they endured.’

“Music gave me security and stability,” she reminisces. “Music became an escape from the grim reality of cancer. Life is unfair and cancer is brutal. Spend time in a children’s cancer ward and see how unfair life can be. But music saved me as it continues to do so today. While it may not be insanely financially lucrative yet, music has paid me in spades, far more than money ever could.”
Although dark, the interlude continues to spur the maturity of an old soul. “My brother’s cancer gave me a deeper understanding about life,” she says. “I believe in fate. How can I not? My brother’s still alive while so many children don’t survive. We can’t control everything. But we can control our reactions to every situation, not matter how horrendous. My brother’s a perfect example. Despite his illness, he’s so strong. I don’t take that strength for granted.”

Saba added that her biological clock “doesn’t pressure me as a goal without context. Finding that right partner to share the ups and downs that children bring to a relationship remains important.”

Ask Saba if she’s fallen prey to a broken heart and she’ll ask you if you’ve ever listened to her music. “No one is spared from heartache,” she laughs. “But I’ve walked away from relationships shattered yet fully aware that I’ve dodged a bullet. Without regret, I understand the lessons learned. Only better is in my future.”

Saba and her talented entourage continue to perform throughout San Diego inclusive of Lestat’s, the Belly Up Tavern, the Casbah, and the House of Blues as well as hot spots in Los Angeles, San Francisco, Portland, Boston, and New York. Features also include gigs on local radio stations 91X, 94/9, KPRI, KUSI News, and the NBC Morning Show.

“Believing that you are who you surround yourself with, everyone in my band is solid, kind, and a real friend,” she concludes. “I won’t work with destructive people. It’s easy to get caught up in a musician’s BS lifestyle and quickly end up down the rabbit hole, forgetting why you became a musician. I define my success by working with talented, like-minded people whom I respect. And right now I’m absolutely there.”

Summergrass Offers Fun for All Ages, Not to Mention Top-Notch Bluegrass Music!!

Back in Action with M. E. Law