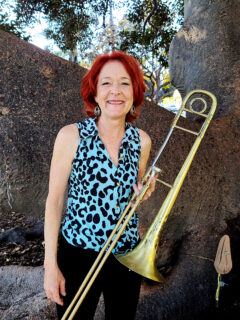 It was sometime in August on a warm summer evening. I remember that the clouds hung low over Point Loma, making for a brilliant sunset. A Saturday night, my girlfriend and I went out dancing, leaving her teenage daughters home with some videos and the chores to clean up after dinner.
We made it to a nightspot not far from my girlfriend’s place. I can’t remember the name, but it was small, dark, with a matchbox sized dance floor. We ordered drinks, and the band started up. They were a lively bunch, a six-piece—three horns, piano, bass, and drums. They played songs that made you want to dance and made you smile, too, old Nat King Cole and Louis Jordan numbers like “Got a Penny, Benny” and “Open the Door, Richard.” We hit the dance floor when the band launched into “Take the A Train.”
One thing I most certainly remember, on the right side of the stage was the bass player, dressed in black, who had a constant repartee going on with the trombonist next to him. The trombonist wore a dark pencil skirt with a white blouse, a patterned vest, and a small hat tipped to the side of her short red hair. 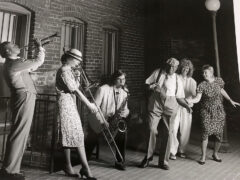 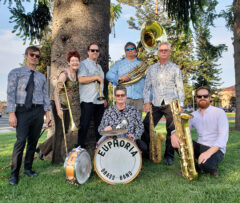 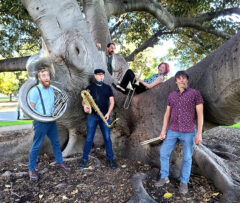 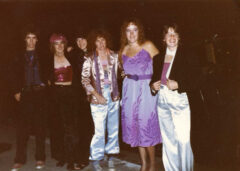 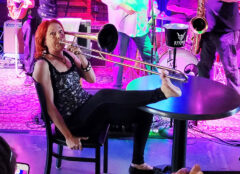 April is also known for playing the trombone with her foot! Photo by Tim Mattox. 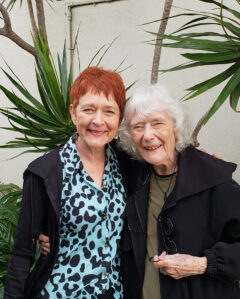 April and her mom. Photo by Julia Hall McMahon.

Louis Valenzuela: Have You Ever Been to ElectricLOuieLand?