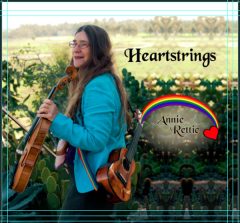 Annie Rettic is a local singer/songwriter who plays several instruments (including five-string viola and mountain dulcimer), and her new CD Heartstrings is quite unusual. It is collects some Rettic originals, another original by local singer Sweet Joyce Ann, and a cover of a standard. Then, Rettic opens up what is already a group of quite personal songs by adding bonus commentary; she includes a minute or two of background stories about where each song came from, including glimpses into her personal life and experiences.

Rettic is the lead vocalist, and plays viola, dulcimer, and ukulele; Jesse Johnson contributes guitars and keyboards in spots, and producer Josquin Des Pres handles bass. The uniqueness of the disc is increased by Rettic’s vocal approach: classically trained with a soaring, warbling soprano that in places climbs with near operatic jumps in range. Though not always the perfect mesh with ukulele-paced roots songs, it grows on the listener with repeated plays.

“Save the Day” opens, a pleasant shuffle about a typical morning in her OB home, with verses sounding almost like prose entries in a diary, “I’ve seen a thousand sunsets since I came to Ocean Beach/ With each one I’m reminded that my dream’s within my reach.” Harmonies on the choruses help the tune.

“Last Place” has a brisk pulse, about personal romantic discoveries and features scat singing in the very high registers. It is a disc highlight, and the next tune takes the same key and basic rhythm to start out, but becomes “Seeing Green.” This one is about a transformative trip to the trails of Hawaii, and conveys the exuberance, “Even though it’s raining/ I’ll bring my sun screen.”

“Every Second” is completely different from the rest of the music; it is written in a spirit of angst and doesn’t have the uplifting, vibrato-laced vocal. Instead, it is about dealing with the hassles of the real world and has a driving beat to get the point home. It gets points for out-of-the-box originality, and breaks up the set nicely. After a slow cover of “Summertime,” Rettic’s “Diamond Jane,” about her mother, is a memoir sung to her about the lake where she made her home and the family she raised. Another highly personal song, it clicks as a beautiful remembrance and the best song on the album.

Rettic adds a minute or two-long “bonus commentary” after the music tracks are finished to discuss the process that resulted in their creation. For San Diegans, several of the songs are the result of Cathryn Beeks’ songwriting “Game” workshops. Rettic continues the personal themes laid out in her music by mentioning some experiences that played roles in her life and music. These include frank talk about her family, marriage history, physical and emotional health, and influences. In many respects it becomes very much the live performance banter of an intimate concert, though recorded separate and in the
studio.

After listening to Annie Rettic’s wide-open approach on Heartstrings, the listener knows nearly everything about her.