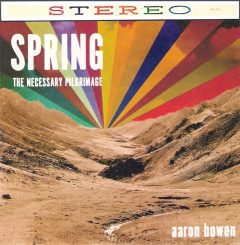 Aaron Bowen’s latest album is Spring the Necessary Pilgrimage. He is a local multi-instrumentalist/songwriter/producer/everything else who has made a reputation as a guitarist, but also has avoided being cornered into any one genre. He has played and recorded locally for a couple of decades, and the new disc is a wonderful testimony to the broad palette he uses to create musical ideas.

Bowen wrote the 11 songs, of which most are vocals; he produced with little help aside from drums by Jake Najor, trumpet by Jason Hanna, and studio horns. Bowen adds six different string and keyboard instruments to his distinctive, upper register vox. The music is laid back and jazzy, with an air of mystery here and there and plenty of spaces for Bowen’s expressive lyrics.

A good example is the first track, “The Great Rabbit,” which rides in on a snappy drum hook, allowing ethereal keyboards to join with a simple guitar lick as Bowen sings, “Maybe sink or maybe swim, maybe then I’ll learn just who I am.” It clicks because when he sings to the mother moon and stars, the preternatural atmosphere of the tune makes it believable. Bowen takes five on “Savage Harvest,” nearly borrowing Brubeck’s immortal classic’s bass/drum riff while stripping off the keyboard, instead expanding some really tasty ideas about flowing parallel rivers, spring, and “something as trivial as sex” while the foot taps to his angular guitar break and marimba playing.

Bowen takes things in a more catchy pop/R&B direction with “Harlem Black Birds,” with smooth harmonies on choruses–after verses with a beat that charges straight ahead. “Around the Sun” is back on a jazz groove, with sharp horns framing Hanna’s contributions. On both of these tracks, Bowen’s ability to provide propulsive, jazzy rhythm guitar is amazing.

The album’s best track is buried ninth in the program; “Winter Woman” is another step outside of the box, built on flamenco roots. It surges on some very beautiful strumming and rapid picking by Bowen, as he sings, “It is you who makes the stars shine for me, if only for a time.” Backing vocals flesh out the sound and help realize the mysterious vibe. “The SÃ©ance” starts as an interesting conventional pop ballad, but two of the verses are cluttered by a second male voice in the background chattering some words that don’t come through–likely meaningful, but the idea doesn’t really work.

Two instrumentals are heard late in the set; “A Brave New World” lays down a keyboard carpet for Hanna to take to the air with trumpet scales, then Bowen takes his turn on bass. Here and throughout Najor is a constant unifying force. “At Pace” is an interesting piece that finds Bowen riffing away on jazz guitar while Najor’s almost African percussion wails away behind, and keyboards occasionally coming in to interrupt the spell. Bowen is a fingerpicker extraordinaire, and this one gives him a chance to stretch out.

Spring the Necessary Pilgrimage from Aaron Bowen is a great listen.