October 2022
Vol. 21, No. 13
A Burning Bright Light: Stevi England, 1962-2012 by Mike HayterMay, 2013
Examining Bob Dylan’s Love Sick Blues by Ted BurkeMay, 2013
John Densmore: An Invitation to Dance on Fire by Terry RolandMay, 2013
A Father’s Day Story: The Courtship of Harry Nilsson’s Son, Zak by Terry Paul RolandMay, 2013
Jazz 88 Keeps Pumping Out the Tunes: Station persists despite numerous challenges over the years, including Coronavirus by Michael J. Williams and Jim TrageserMay, 2013
Me and Ronnie Earl by Eric LiebermanMay, 2013
Lawrence Ferlinghetti: America’s Poet by Ted BurkeMay, 2013
Q & A with Gabe Lapano: After the Rain and Beyond by Andy RasmussenMay, 2013
Remembering Sam Hinton by Paul HomiczMay, 2013
Band of Brothers: The Liggins Brothers by Bart MendozaMay, 2013
Advertisements 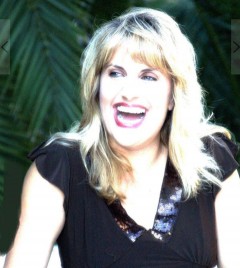 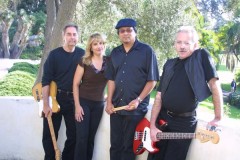 Stevie with her band, Triple Threat

Last year, we all lost a burning bright light. Stevi England’s (aka Stevi Lynn) life was tragically cut down in a random and senseless event. Stevi was widely known in San Diego Music Circles for many years as a premier blues singer. She was a force of nature, a true natural talent, and a beautiful woman in and out. We will not see another like her.

About eight years ago, my band was floundering and we cast our net wide to find a lead singer who could right us. Stevi reluctantly agreed to work with us. Her specialty was blues, especially electric powerhouse blues. She could do Janis better than Janis and blew the doors off of Stevie Ray and BB King songs. Indefatigable and single-minded, she suffered no fools. Manys the time we would screw up a tune or not have a spot on performance and we would feel the wrath so we stepped up our game. The Kraken, the Surf and Saddle, the Leucadian were ours and a name was being made. I never saw her perform at less than 200% and it made the rest of us better. We even did blues at Symphony Pops. Who would think?

Stevi was a study in contrasts. A beautiful blonde, she possessed a gale-force voice. A blues purist but at home with a funk or ’70s pop song. A sweet and humorous person but when you crossed her, a formidable foe. I saw her take on bar owners and bartenders when they tried to pull some nonsense. Skilled in kickboxing, I witnessed an arrogant bartender back down fast when she threatened to “jump over the bar and kick your ass if we don’t get paid right now.” Thing was, she wasn’t bluffing. Most venue owners loved her as she was a natural promoter but insecure about performing at times. Jumpy before a gig but completely in her element when the music started. Demanding, yet loyal to a fault. Possessed of a fearless voice but vulnerable. A biker but with a long career with prominent law firms.

Stevi had demons she would battle. She loved to party and but could keep it together when most would be on the floor. I saw her relationships and she always loved her man. Things would be working great but some cruel cosmic act would blow the deal. Always upbeat but never secure as she lost one man to the bottle and another to a sudden aneurysm. Fate just never favored her that way until the very end. Like any Billie Holiday song, love was a struggle to preserve and endure or exist. So ironic but in complete character for this lady who sang the blues.

Stevi worked with many, many musicians over the years or rather they worked with her, such as the Blues Brokers, Ghost Riders, the Stevi Lynn Band, the Blues Shouters, Tribal Beat, Sweet Faith, Miff Laracy. So many local musicians had the privilege. Her Facebook page has a picture of John Stamos, her musical partner (and crush) many times for a large LA fundraising event. She confided that Stamos lost it for the last time when she completely upstaged him during a performance of “Mustang Sally.” Many Sunday afternoons would find her at North County blues jams tearing it up after a grueling four-hour gig the night before. The allure of the performance and the high from singing were her lifeblood. We lost track of each musically for a while but she would call to keep me in the loop. She suddenly lost her man about four years ago and after the grieving, she got back into performing. We reset musically as an acoustic Americana-themed group and the hard electric voice was replaced by the full-nuanced voice. I had never really heard that side of her but she had a God-given gift and was exceptional to hear. She met a new guy, Bill Jimenez, who got her in AA and so here was a new person. The combination of true love and commitment with a more sober lifestyle allowed her to soar. Still possessed of musical fire and full commitment without the torment, she explored new musical territory with a new lease on life. Some of the songs remained the same but were reinvented as she had reinvented herself. Best version ever of Joplin’s “Piece of My Heart” done acoustic. Astounding. She had some supremely talented new players and me. What she always saw in me, I will never know but it meant everything to me. She loved my original tunes and her interpretations were exquisite. Success begat plans and there was so much to be accomplished.

One evening last July, she and Bill were doing what she loved to do: ride that Harley and visit clubs, maybe sit in, and sing. She loved socializing with her many peeps and the kick from networking new gigs. Riding back mid-evening, it all went wrong. She went instantly without pain, it is said. What else is told is that she lived life like most of us can only dream. In her life, she had many great successes and more than her share of a tragic arc. I can say she had finally found her place with Bill as a loving partner. Her music was better than ever. Maybe those two things are enough in any life.

As I write this on what would have been her 50th birthday, I do not comprehend the finality of this. We can never understand why things happen the way they do. As she sang, we are “Living on Shaky Ground.” Maybe she was ultimately meant to go out on top. That’s the way she would have planned it. She powered through “Let Those Good Times Roll,” “Whole Lot of Love” or “Pour Me” but her best interpretation was a stripped down “Fire and Rain.” Heartfelt.