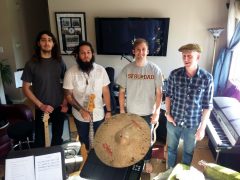 “You mean like an LP?” I asked. Believing that the last recording committed to an actual two-sided 331/3 RPM long-playing record album was put out by Michael McDonald, or the Doobie Brothers, or some sort of disco act in 1978, I was understandably incredulous. “You’re putting your new recording out as an old-fashioned record?

Drummer Matthew Smith explained, with his project Juice Box, that issuing the recording as a long-play album was part of his commitment to the retro sound of a couple generations ago. The sound of his soul/funk band Juice Box harkens back to the days, 30 or 40 years ago, when funk and soul were ubiquitous across the airwaves and dance floors, when James Brown was a sex machine and George Clinton’s Maggot Brain assured us that Mother Earth was indeed pregnant for the third time. And it was also a time when people got their recorded music on round pieces of vinyl called record albums, which they bought at places called record stores and played them on things called turntables. “I wanted that retro sound that I thought could attract a younger audience,” says Smith. After a while he overcame my skepticism. Hey, at least he’s not considering issuing copies on eight-track tape.

The genesis of Juice Box goes back to February of this year. Smith says, “I had some time off at that time, so I set a goal. I tried to write a song a day. I wound up, in the end, with 21 tunes.” Reviewing his 28-day process, five or six of his compositions stood out from the others. They also seemed like tunes that a small ensemble could get their arms around pretty quickly. “So the next thing was that I wanted to get them out there,” Smith says.

Smith had no certain group in mind for making these songs, so he cast about for players who could recreate the sound of Funkadellic and Parliament. Playing the Fender Rhodes in Juice Box (and the member of the band credited with coming up with the band’s name) is Ed Kornhauser. Kornhauser is one of the finest up-and-coming keyboardists in San Diego. An East Coast transplant, he is primarily a jazz performer, although he has also performed in blues bands off and on over the years. Around town he has backed up powerhouse vocalists Leonard Patton and Whitney Shay.

Fellow San Diego State graduate Louis Valenzuela, who received his bachelor’s degree of music in jazz studies, is a freelance musician who can also be heard with the Afrojazziacs, an enterprise that performs contemporary and traditional Cuban music, as well as reggae, salsa, jazz, and funk. Omar Lopez provides the bass in Juice Box. Lopez is a multi-instrumentalist, ethnomusicologist, and composer who is also a member of the Latin/Funk band the B-Side Players. He has performed with Poncho Sanchez and Stanley Jordan. He has also performed with the greatest gift to the world from the San Diego/Tijuana area, Chunky Sanchez.

The younger Smith found himself drumming for the surf band version of the Jackstraws, providing audiences with hits such as “Pipeline” and “Walk Don’t Run.” “I can always go back to my first gig with the Jackstraws at the 2000 Del Mar Fair and when I first played the surf drum solo on ‘Wipeout’,” he says. “I was a rhythmic mess and sped up, slowed down, you name it I did it. But the band was always supportive of me and understood that I was learning and growing. Without this band, I wouldn’t have had the opportunity to learn what it was like to contribute musically to the bigger picture.”

A lot of young performers feel the urge to add more and more licks and lines, to play as many notes as possible. For Smith, his experience with the Jackstraws taught him that a good musical performance is what you play, but, just as important, it is also what you don’t play. As they say in many fields, most times less is more. “The Jackstraws also taught me A LOT about how to present as well as perform,” Smith adds.

Why the drums? “I’ve asked myself that question a lot,” Smith replies. “I just knew that I wanted to play the drums. That’s it.” He joined the school band in seventh grade, and in eighth grade he joined a ska band, the Skank Agents. “The Skank Agents, I continued to stay involved with them all this while. It is definitely a long-standing relationship. As a matter of fact, we are performing our last show this month.”

Though he served as the inspiration for Juice Box and has been the organizer behind the project, Smith put his ego aside when it came to the band. “This record and this group is totally about the group sound,” he says. Leaving flashiness aside, his personal playing took something of a backseat to the overall groove of the entire band.

During my conversation with Smith he assuaged my concerns and told me that I would not have to dig out my mothballed turntable and visit an antique store to buy a “needle” to place on the platter if I wanted to enjoy Juice Box’s music at home. The band is also releasing their premier recording as a CD. In true 21st-century fashion, you can also view videos of the band on YouTube, and yes, you can like their Facebook page. I’m not certain of this, but I think that there may even be something called MP3s that some young folks have been telling me about.

Smith is strongly committed to not only the classic funk and soul of the seventies but the sounds that made up the classic grooves. The keyboard used for the Juice Box recording is a 1972 Fender Rhodes. The instrument is 42 years old, admittedly a blink of an eye for a Stradivarius or Guarneri, but in this era of super-duper electronics, a Fender Rhodes keyboard is a true relic. Smith wanted to ensure that the instrument had the sound that Herbie Hancock and Jan Hammer relied on. “We ran it through a new amp, but it was a Fender Hot Rod Deluxe, and we ran it through the dirty channel to give the sound a little crunch,” he says.

Lopez played a classic Fender Precision bass amplified through an Ampeg Portaflex “Flip Top” amplifier. This was the sound of bass ubiquity, as it was the bass and amp used by Carol Kay and other studio bass players on almost every record made in the United States for 20 years or more. It is the bass sound on the recordings of the Mamas and Papas, the Monkees, the Beach Boys, and even Frank Zappa and the Mothers of Invention.

Smith put up some of his own money to finance the recording. The remainder of the cash the band raised through crowd funding. “We went through Indiegogo, which is part of Kickstarter,” Smith says. For the recording Smith rehearsed the band one day and recorded the next day at Tim Felten’s Kitchen 2 studio. The entire recording was completed in one day, eight hours in the studio. Smith spent another small portion of the next day for mixing and adding a touch of reverb here and there.

With all the tunes recorded, squeezed onto CDs, and pressed to vinyl, the band plans a CD release/LP release party at Seven Grand on the eleventh of this month. They also have a free show at Mesa College on the 24th starting at one in the afternoon. Further plans for the band include local performances and a West Coast tour.

Smith believes that however a person experiences Juice Box — whether it is during one of the band’s live performances, viewing a YouTube video, playing their CD, or even placing their LP on a turntable platter and setting the needle to the groove — he or she will be won over by this new take on some old music. He says, “In this day and age it’s about hooking someone at first listen, and with this project I feel confident that each song has this hook.”

Normandie Wilson Makes It All Work