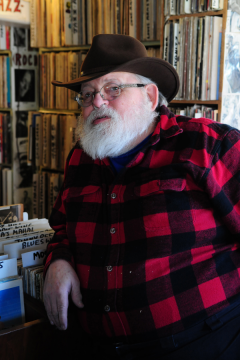 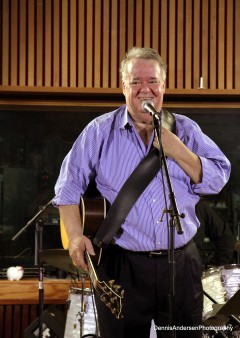 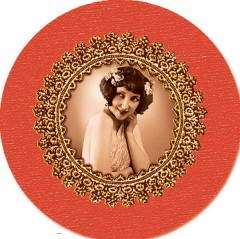 Jazz fans and other music lovers will have an opportunity to celebrate a local music icon on September 9, which has been declared (by Mayor Faulconer) Lou Curtiss Day in San Diego. Jazz 88.3 will present A Tribute to Lou Curtiss featuring Janet Klein, starting at 8pm, and will include an appearance by Jeffrey Joe Morin. The show at City College’s Saville Theatre is free for members of Jazz 88, downloadable parking permits and other details are available at the station’s website.

Lou has been host of “Jazz Roots” on the FM station since 1986 (following spots on other local radio dating back to 1970), spinning impossible-to-find records by the progenitors of blues and jazz for two hours on Sunday nights; his most recent playlist log reads like a blues history lesson with tracks by the Mississippi Sheiks, Bo Carter, and Texas Alexander from 1930-31. No surprise, given his standing as this town’s greatest musical archivist.

At the end of June, two days before turning 75, Lou retired, closing his Folk Arts Rare Record store. The place had been a shrine to local collectors and musicians since 1967 at three locations, but he and his wife Virginia decided it was time. For decades, customers and visitors have been able to tap into Lou’s encyclopedic knowledge of blues and jazz musicians, smell the ink from the thousands of record jackets, and rummage through the rare old-time albums that few other collectors have or even know about. While Lou is retiring from the business, the prized inventory of his store is still going to be around-at the new Folk Arts store, where Brendan Boyle is open for business as of September 1, at 3072 El Cajon Blvd and will display Lou’s unique music memorabilia.

“I was 29 years old when I opened the store; Brendan is 32 so he has plenty of time to bring the store forward quite a few years. Brendan also knows his way around old time collectable records, a lot more than I knew at 32,” Lou says.

Visitors to the old Folk Arts, if they were lucky, maybe have been able to hear Lou speak with pride of his multitude of taped performances, dating back decades, of many of the most important roots musicians to pass through San Diego-many taped right there at the store. Then, there is his Lou Curtiss Sound Library, with over 90,000 hours and 90 years of vintage recordings. He received a grant from the Grammy Foundation to digitize and preserve this music, and has been involved with Smithsonian Institution, the Library of Congress, and UCLA’s archiving efforts.

Over the years, Lou has been instrumental in organizing many local music events, co-founding the San Diego Folk Festival in 1967 and being involved in booking its acts for many subsequent years, as well as involvement with other gatherings, including the Adams Avenue Street Fair and Adams Avenue Roots Festival. Part of the early local folk music crowd since the “folk scare” revival, and along with Virginia, a folk performer since the mid ’60s, Lou has networked for years with top local roots performers. The long list includes Jack Tempchin, Mojo Nixon, A.J. Croce, and Tom Waits. A recent story by San Diego U-T’s George Varga about the store’s closing noted that Nixon estimated he had bought 5,000 albums at Folk Arts over a 34-year period and quoted Waits as saying, “There’s no better place for your ears to eat.”

Lou freely shares his knowledge. Readers of the San Diego Troubadour are well-acquainted with his monthly column “Recordially, Lou Curtiss,” as he has been a contributor since the first issue over 10 years ago. Users of social media may also be fortunate enough to receive his frequently posted songs by seminal blues and jazz artists on YouTube or Pico Song. On August 12, the tunes include a 1933 “I’m Nuts About Mutts” from a 78rpm, by the Del Lampe Orchestra. Lou plans to keep busy writing and with his Sound Library projects.
“And I’ll continue writing for the Troubadour and doing my Sunday night Jazz Roots show.”

The show on September 9 in his honor will feature some great music right in Lou’s wheelhouse: Janet Klein and Her Parlor Boys’ music sounds like it was captured on a time machine from a 1920s speakeasy. Klein’s sassy, saucy vocals and stage presence combine with vintage swing jazz instrumentation and more than a little deliberate raciness; she resembles the cartoons’ Betty Boop, if one can imagine Betty singing suggestive lyrics with an old-time jazzy feel. Jeffrey Joe Morin can also play and sing funny story songs, and blues and swing ballads. He writes songs that are wickedly zany as well as soulful, and gives new life to many familiar standards. Having both of these artists on the bill should be perfect for celebrating Lou Curtiss Day.

JUICE BOX: A New Take on Soul and Funk